That last game was a bit quick. It hammered home the lesson that you should always protect your warcaster, but wasn't the most exciting play experience. Consequently we decided on a re-match instead of expanding out to 25 points. 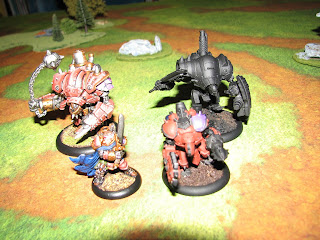 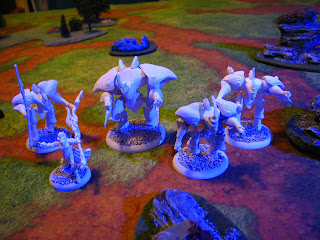 We continue to battle it out until the first warcaster is dead.

Myantek won the roll and decided to go first. I picked my side because there was less stuff in my way on the approach. With all her guns and the ability to slow me down I felt the need to close quickly. 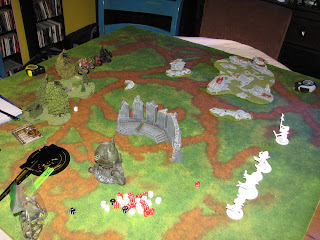 The Chimera Apparated (place completely within 2" during the upkeep phase.) forward. All the Myrmidons ran into the ruins except the Griffon. Helynna cast Rhythm of War (Warjacks in the battlegroup can advance 3 inches after all models have activated) and then cast Deceleration (+2 ARM vs Ranged and Magic attacks.), then advanced behind the Gorgon. All the jacks then advanced 3 inches.

Magnus cast Death Ward (+2 ARM and pick hit locations) on the Mangler, Snipe (+4 Rng on target model.) on the Rover, and Blur (+3 Defense against range and magic attacks.) on the Renegade. Magnus then charged the Griffon, ending his activation in cover. The Mangler and Rover ran to flank Magnus while the Renegade ended up behind the Mangler. 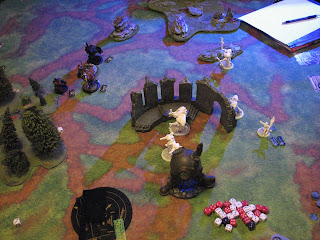 Helynna upkept Rhythm of War and assigned two focus to the Manticore while the Chimera Apparated. The Manticore advanced and rolled three for its number of shots. The first shot struck home with a boosted to hit roll, and the damage roll was 6,6,4, doing 10 points of damage to the Renegade and crippling its left arm. The second shot was also boosted to hit but bounced, while the third shot missed.

The Chimera and Gorgon ran, while Helynna and the Griffon advanced. Helynna cast Deceleration again and then the jacks rearranged themselves using Rhythm of War, with the Manticore attempting to tuck itself behind the ruins.

Magnus upkept his spells for free due to his Resourceful ability, and gave two focus to the Mangler and one to the Renegade. Magnus activated first and moved base to base with the Renegade, then used his Repair ability to fix 4 points of damage, bringing the arm back on line. He then cast Iron Aggression (Target warjack may run, charge, or slam for free. Melee attack rolls on the warjack are boosted.) on the Mangler. Lastly he used his feat, Hit and Run (Models in battlegroup gain Parry. After all models have activated all the models in his battlegroup can run for free.).

The Renegade aimed at the Manticore and shot its Obliterator Rocket. A boosted roll hit it and knocked it down, but a mediocre boosted damage roll only did 5 points to its field. The Mangler then charged it for free thanks to Iron Aggression. I had been worried the Obliterator might miss and the boosted to hit rolls would be needed, but no such worries. With the Manticore knocked down the Mangler hit with all its attacks, destroying the Manticore with its last blow.

Lastly the Rover advanced towards the Griffon, shooting it and doing 4 points to its field. After that the feat activated. The Mangler ran base to base with the Chimera, while the Rover and Renegade formed a wall with Magnus behind them. 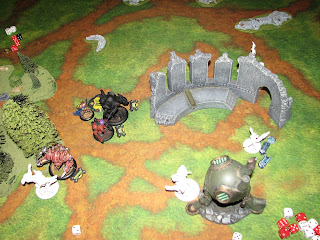 Helynna dropped Rhythm of War and assigned two focus to both the Chimera and Gorgon. Helynna advanced, boosted to hit, and cast Hand of Destruction  (Models in battlegroup get and additional die, them drop the lowest, for attack and damage rolls against this model.) on the Mangler, leaving her at zero focus. She then used her feat Arcantrik Aptitude (+3 ARM to friendly models. Remove all damage from warjack power fields. Ignore the effects of crippled systems for one round.). The Chimera then used Combo-Smite (*attack. Make a melee attack and double the weapon POW when before adding to warjack STR.) and smashed the Mangler for 10 points. It bought an attack, hit, and boosted damage to do some more. The Gorgon then charged and also did a Combo-Smite. It also bought and boosted damage, leaving the Mangler at 1 point in its movement system.

The Griffon then ran to engage Magnus, the Rover, and the Renegade. 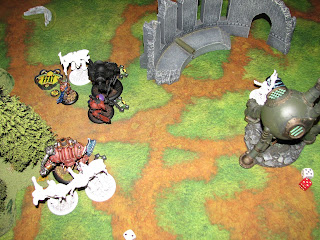 Magnus upkept everything for free and assigned two focus to the Renegade and one to the Rover. The Rover activated first and did a head butt power attack on the Griffon. It boosted to hit and knocked the smaller jack down. Magnus then cast Iron Aggression on the Renegade, leaving himself at one focus. The Mangler then activated and did a Thresher attack (*attack. This model makes a simultaneous melee attack against all models in range with this weapon.) but didn't do anything thanks to his arm being crippled.

Lastly the Renegade charged Helynna, for free thanks to Iron Agression. It smashed into her and hammered away, but Helynna's feat saved her, the +3 ARM being enough to keep her alive at 2 points. 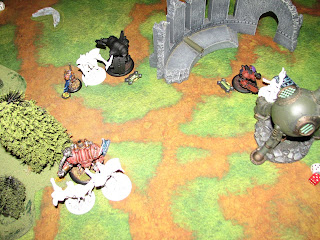 After a lot of pondering Myantek did not have Helynna upkeep Hand of Destruction. The Gorgon and Griffon were both assigned two focus. The Chimera activated first. More pondering ensued as Myantek decided whether to use the Chimera's one focus on the hit or damage roll. She eventually decided on the to hit roll as she needed a five to hit there and only a four for damage. It hit, and she rolled enough to do the single damage point needed to destroy the Mangler.

Helynna activated next and cast Hand of Destruction on Magnus through the Chimera's arc node. She boosted and it hit. The Gorgon activated next, and charged Magnus. It hit Magnus and did five points of damage. The next attack did ten points and Magnus spent his last focus point to reduce it to five. The last attack did nothing. 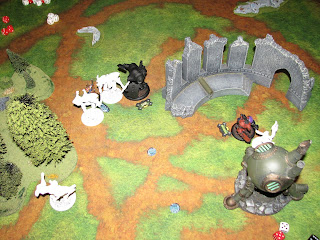 Well that didn't go quite as planned. When Myantek messed up and left the Manticore in charge range of the Mangler I thought I had it in the bag. I specifically made sure that Magnus couldn't buy it and that the Chimera couldn't escape by Apparating.

Little did I realise that escape was not her plan.

I suppose I could have beat up the Griffon instead. But it was ARM 21 with the feat up, and I didn't think I'd be able to do it. And if I went for the more dangerous jacks I'd be leaving the Griffon way to close to Magnus. Instead I tried to end it. In hind sight think I might have been better off just taking the free strikes from the Griffon and trying to shoot Helynna with the Rover. But I was paranoid about the Renegade getting its right arm crippled from a free strike, so I went for it and failed. Then Myantek went for it and succeeded.

I was pretty sure he had me after he got the Manticore.  Facing down two heavies with none is very daunting.  I thought I'd left the thing out of range too.  Then it really became an all or nothing gambit.  Activation order was key.  Figuring out which thing had to act when and playing the odds.  I'm still experimenting with how far apart things can get and where I want these guys placed.  I won this game but I definitely don't have it figured out.  Frankly, I'd like another couple of games at this level to just worry about the battle group. 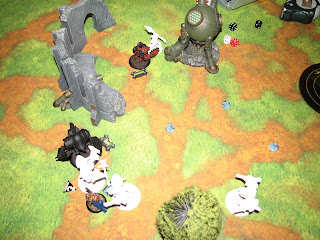