Legion vs Circle 500 Points
We have been playing hard but not much has been getting stuck on the blog. Saturdays we've been introducing some new players and have actually gotten hooked on quick 350 point round robin action. Short, sweet, and brutal. Mondays tend to be the 750 point serious games. This is a 500 pointer that Myantek and I squeezed in during the week. It was a quick assassination game with two play for fun lists. Kaya and some classic Primal vs Thagrosh and all the Legion light beasts out there. I tried to fit in the Harrier but couldn't quite squeeze it in, but was alright with it because it still fit the theme.
Legion 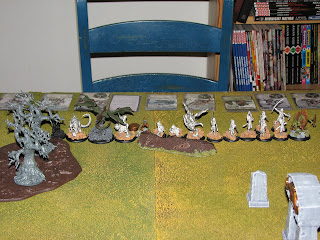 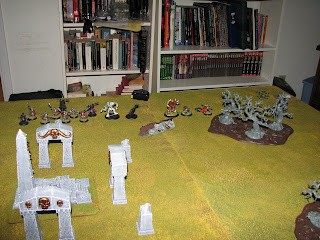 Kaya the Wildborne
Warpwolf
Warpwolf
Argus
Argus
Huntsman + 8 Wolves of Orboros
Totem Hunter
Set Up
The terrain was two forest templates on the right side, each about a third of the way up from the edge of the board. Some small walls near the deployment zones were centre, while the left was dominated by a temple complex in the middle of the board.
Myantek went first and set up the Wolves behind the temple. Warpwolf 1 was to the right with the Totem Hunter beside him. Continuing right, beside and behind the forest were Warpwolf 2, Argus 1, Kaya, and then Argus 2 on the other side of the forest.
I set my Legion up in a more central position. Holding the left flank was the Teraph, with the Swordsmen lined up beside him. Continuing in a tight line were the Nephilim, Swamp Gobbers, Shredder, Thagrosh, Seraph, Raek, and lastly the Forsaken a good distance from the Swamp Gobbers.
Circle Turn 1 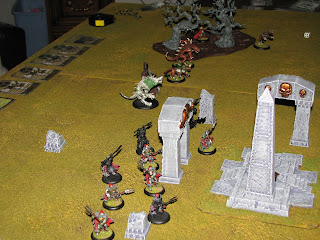 The Wolves run to the temple outskirts where they are joined by the Totem Hunter. Kaya puts Rager on Warpwolf 2 and moves forward into the forest. Argus 2 runs into position between the two forest templates. Both the Warpwolves add two to their ARM and move forward. Argus 1 riles and runs in front of the trees.
Legion Turn 1 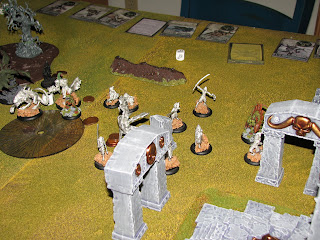 The Teraph moves up and shoots at the Wolves. Out of range the AOE deviates onto nothing. Thagrosh activates and begins by casting Death Shroud, Draconic Blessing on the Nephilim, and Slipstream. He then walks forward and Slipstreams the Seraph forward. The Seraph then activates and casts Slipstream, moving Thagrosh up as it advances. The Serpah then unloads on Argus 2, destroying its Spirit. The Shredder starts by going Rabid and then walks forward eight inches before putting Tenacity on Thagrosh while the Nephilim riles and then runs up beside it. Next the Forsaken moves up and around the forest before grabbing the fury off the Seraph, after which the Raek runs to put itself between Thagrosh and the Circle army. Carefully skirting around the Forsaken the Gobbers put a 5" Cloud in fron of Thagrosh and on both the Raek and Shredder. The Swordsmen then run to the outskirts of the temple, keeping it between them and the wolves. 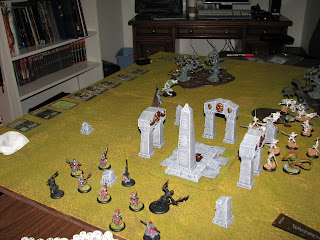 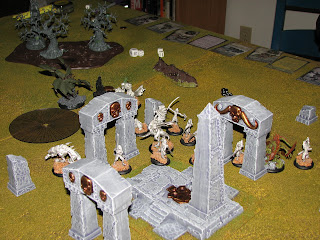 Thagrosh leeches all and gets his final fury from the Anthanc, before upkeeping Draconic Strength on the Nephilim. The Seraph goes first and moves up to shoot at Warpwolf 1, but is just short. The Shredder puts Tenacity on Thagrosh and advances. Thagrosh then casts Deathshroud and Slipstream. He moves forward to drag the Seraph back before turning left so that he'll keep the Teraph in range after it advances. Now it's the Teraph's activation and it moves up and hunkers beside a stone pillar, before squeezing off a shot and annihilating the Totem Hunter and a Wolf of Orboros with boosted rolls. The Swordsmen run into the temple ruins edge and cause a stand off, since neither side can effectively charge each other.
The rest is positioning. The Raek runs to a forward position by the Temple while the Nephilim moves up to support the Swordsmen. The Gobbers move up some more and put the 5" Cloud AOE down to block line of sight to the Seraph and Thagrosh. Lastly the Forsaken grabs a fury off the Shredder.
Circle Turn 3 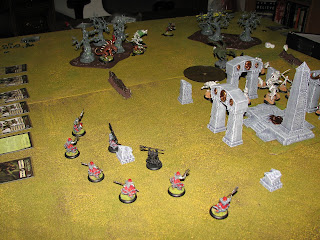 Kaya leeches all and upkeeps Rager on Warpwolf 2. Having sucked a large chunk of my army away from the heavy hitters the Wolves fall back to their starting side of the temple. On the other side the Circle moves out, with Argus 2 running to the open centre between the forests. Warpwolf 1 takes +2 movement and runs to position beside Argus 2. Warpwold 2 takes +2 ARM and runs through the trees to come out in front of the forest. Kaya moves up behind Argus 1 and Warpwolf 1 and then heals Argus 2 for three more points.
Legion Turn 3
Thagrosh leaches all and upkeeps Draconic Blessing. The Teraph walks into the temple and 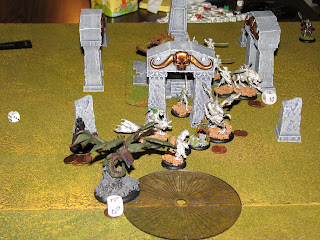 shoots at another Wolf. It's short, but the scatter gods are with me and another Wolf dies to a boosted AOE. The Seraph aims, blows the Body off of Argus 1, but then misses all three of its strafe attacks. The Shredder goes Rabid again and circles round Thagrosh before putting Tenacity on the Seraph. Thagrosh casts Slipstream, Deathshroud, and moves to and away from the Seraph to drag it away from the front. I quickly count up Fury current and to come and realise I risk frenzy next turn, so Thagrosh then hits the Seraph with Twisted Form (-2 fury)which deals with that problem. The Swamp Gobbers block line of sight to Thagrosh and get the Seraph in the cloud. The Raek moves up beside a temple column and casts Shadowstalk at the Wolves of Orboros to try and stop them from getting away, while the Nephilim runs to beside the Shredder to block access to Thagrosh. The Swordsmen run through and into the temple while the Forsaken moves up behind the Seraph.

Circle Turn 4
Kaya leeches all. The Wolves circle some more and the Raek activates Shadowstalk to move 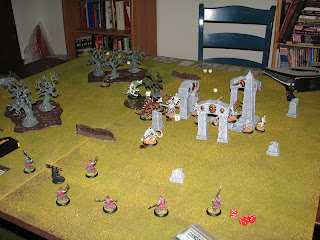 after them. Argus 2 runs forward to the Swamp Gobbers with Warpwolf (at +2 SPD) right behind. Warpwolf 1 chrages the Seraph but falls short thanks to Slipstream. Argus 1 walks forward followed by Kaya. Her movement puts her back into control range of Argus 2 and she goes for the assassination run. Within two inches, as opposed to completely within, lets her hop over the Gobbers and into range of Thagrosh. She starts pounding with boosteed hit and damage rolls. Pops feat, keeps pounding, gets a Critical and knocks Thagrosh down, but due to Death Shroud just can't finish him.
Legion Turn 4 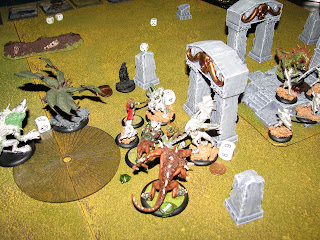 Thagrosh leeches and upkeeps Draconic Blessing. The Nephilim charges over Thagrosh to whack Kaya for fourteen points of damage. Thagrosh then stands up and explodes her into a cloud of ash.
Afterward
Defenstrator
That was a game of manuever followed by sudden death. I felt there was good play on both sides of this one. My Slipstream antics managed to keep the Seraph just out of charge range while still being able to shoot stuff up, keeping the Circle back out of effective range. On the other hand I had a Teraph, Raek, Nephilim and unit of Swordsmen hunting a unit of Wolves and a Totem Hunter, so Myantek was basicly doing the same to me on the other side. Even my one actual kill that was worth victory points, the Totem Hunter, came about because I got lucky with an above average damage roll, so I can't say I outplayed her on this one.
Basically it came down to Death Shroud. When Kaya got in I was sure I was dead since I'm so used to playing the lower ARM ladies of Legion. I think Myantek thougt the same thing. Instead we were both surprised as a combination of Death Shroud and lowish damage rolls meant that most of Kaya's attacks did minimal damage, setting her up to be killed next turn.
I do think that Myantek could have been a bit more aggressive with her main force. Craming two Warpwolves down someones throat is tough for anyone to deal with, and with her Argus she had ample transfer targets to weather the Seraph. If it had been Kaya doing the charging and then teleporting in a Warpwolf it would have been all over. On the other hand, it was because she withdrew for a turn that the rest of my army got so out of position chasing the Wolves, so who knows?
Myantek
I wanted to play the force that I've been painting, just to see how it works before adding in some of the Evolution goodies. Defenstrator has been converting a second Waprwolf for me so it's only been relatively recently that I've gotten to use the two of them together. I still feel pretty rusty (not having played quite as many games recently as Defenstrator has) so I'm playing to keep with this army for a bit to really get a feel for it. That said, I do think I need to change up the playing style a bit if I hope to get some victories.
Defenstrator was right. I needed to be more aggressive with this force. I was happy with the way the Wolves were dealing with thier flank but, once again, I lost position of the Totem Hunter and he died before he got to do anything. I know this guy is much better than my use of him.
As for Kaya, I shouldn't have used her for the assassination. I sort of forgot that Deathshroud was up (when I shouldn't have, Thagrosh always has Deathshroud up) but I felt it was the time to make my move. Defenstrator is very careful when playing against Kaya to avoid getting any space for something to jump in to so when I see the moment he's left the space, especially with no transfer options the thing that leaps to mind is assassinate. I felt my chances were OK but Kaya just couldn't get past the -2 STR. I probably should have just given the Warpwolf some speed and charged the Seraph to play the yoyo and removed some of Thag's Fury potential, and the shooting on that flank. Hindsight is 20/20.
Posted by Defenstrator at 20:41