Lylyth vs Kreuger - Process of Elimination 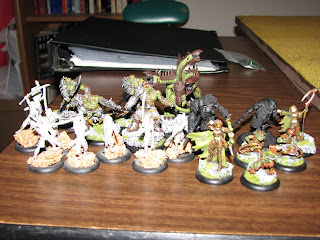 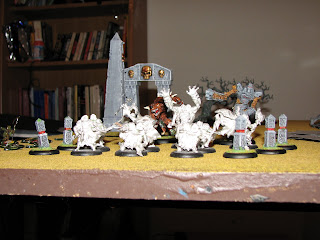 
Starting on the first players first turn, a player wins when he has three or more Control Points.


I set up first, putting the Warmongers and Warchief on one side of the River. The rest I put on the other side with the Swordsmen in the centre, with Typhon a 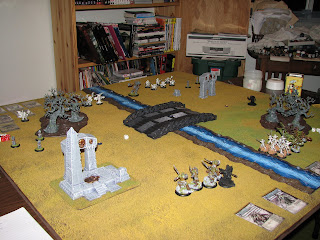 nd Lylyth to their right. The Shepherd and Shredder stood behind them, while Gudrun ended up being advance deployed behind a pillar to mencae the Druids.

The Warmongers run forward followed by the Warchief. Lylyth casts Taint on Typhon, casts Tenacity on Typhon and herself, and moves up. The Swamp Gobbers move up and put smoke on Typhon. The Swordsmen and Shepherd then run into position. The Shredder puts Tenacity on itself, goes Rabid, and moves up beside Lylyth. Gudrun runs to the pillar.

The Druids move and use the Devouring on Gudrun. They get the Crit Knockdown but fail to kill 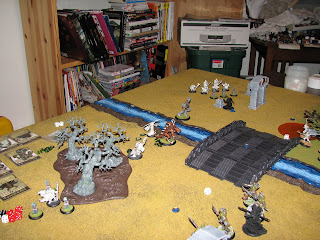 him. The Wold warden moves up but can't blast Gudrun since he's Feigning Death. The Warpwolf and Gorax both rile and run. Kreuger puts Lightening Tendrils on the Warpwolf and casts Skybourne and Windstorm, but is just out of range of the swamp cloud. The Blackclad runs forward and Shifting Stones 1 teleport to surround him. Stones 2 make a wall between Gudrun and the Druids.

Lylyth leaches all but is still down 1 fury. She doesn't upkeep Taint. The Shredder goes Rabid again and walks up to put Tenacity on Typhon. The Swordsmen run out of the way and spread out. Lylyth moves up and shoots at the Warpwolf. I'm a 1/4 inch short. Her next shot is directed at the Woldwarden, and there I'm 1/2 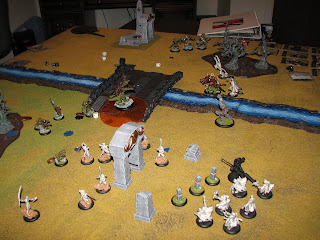 and inch short. Typhon runs to the bridge. The Shepherd moves up. the Gobbers move up and again put their smoke on Typhon. The Warmongers charge Shifting Stones 1 and kill one, while the Warchief retreats from the Gorax to behind the bridge. Gudrun gets up and walks to engage the Druids.

Kreuger leeches to full and upkeeps Lightening Tendrils on the Warpwolf. The Druids kill Gudrun (the first time). The Gorax moves up to the bridge while the Warpwolf takes +2 ARM and runs over the river to the bridge. The Blackclad teleports near to Lylyth. He is deemed expendable and the Wold Warden shoots Lightening at him, but it misses by one.

Kreuger casts Skybourne and advances behind the Warpwolf and Woldwarden. He then feats 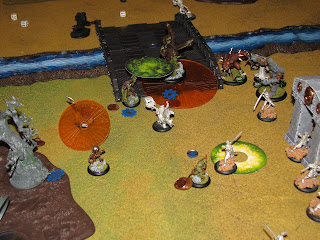 with Storm Ravager, killing 1 Swordsmen, 1 Swamp Gobber, and doing 4 wounds to the Shpeherd. Hits Lylyth and Typhon and rolls a double 6 for damage on each. Lylyth transfers and Typhon feels the pain, although no aspects are destroyed. Stones 1 Shift to block the Warmongers from the Gorax while Stones 2 block the Swordsmen from the Druids.

Legion
Typhon makes a Threshold check due to Kreugers feat and passes. Lylyth leeches and cuts herself for the fury lost to transfering. I start the turn with Gudrun, who stands up and mulches 3 Druids, including the leader. The Warchief charges Shifting Stones 1 but is just short, so the Warmongers have to content themselves with destroying the rest of the Shifting Stones instead of charging the Gorax.


Lylyth then uses her feat Field of Slaughter, but it isn't enough for her to hit effective DEF 21 Krueger with either of her boosted shots. I should have shot the Warpwolf and then cast Eruption of Spines instead. But then Typhon walks over and is able to use his reach to attack Kreuger through the gap between the Warp Wolf and Wold Warden. With Typhon's MAT 7 plus the extra die to hit from Field of Slaughter, Kreuger is quickly torn aprt with multiple attacks.

Afterward
Defenstrator
Not much to be said except Reach + MAT 7 for the win. This army was a change of pace from my usual beast heavy one, and the comparitive lack of mobility took a bit of getting used to. Gudrun was great at blocking the Druids and just being a general pain. The Warmongers and Warchief on the other hand didn't do anything but wander around and kill of 21 points worth of Shifting Stones. But the man of the match is obviously Typhon. An Angelius could have reached Krueger but probably would have had a hard time closing the deal. Typhon with his high MAT and multiple attacks is perfect for killing warlocks, and reach gives him the ability to use it.
Myantek
The gap between the Warpwolf and the Woldwarden was just a little too big. I thought I was in a pretty good position for the next turn but I didn't quite count on Typhon. I don't know. I feel like there's something a little off about my Kreuger army but I'm not sure what it is. The Gorax hasn't done anything for me, but I don't know if I want to drop it in favour of something else. Something needs tweaking.
Posted by Defenstrator at 13:26