Cygnar vs Retribution: The Revenge of Vyros

Things have been busy with Spring Break and the kids, not to mention painting and playing games, but we've finally gotten around to writting up another report. I decided to take a jack heavy Nemo list while Myantek is sticking to her Dawngaurd army. 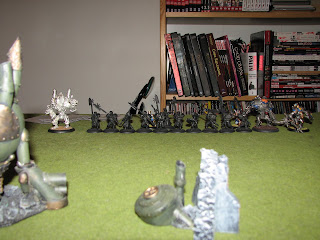 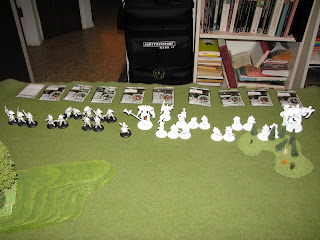 Mark a 24˝ square centered on the table parallel to the board edges. This is the kill box.Victory ConditionsAt the end of each player’s own turn, starting on the first player’s second turn, a player loses the match if he ends his own turn with any friendly warcaster or warlock not within the kill box.If time runs out before a player has won the match via scenario or assassination victory, break the tie using only the assassination and secondary tiebreaker rules outlined in “Victory & Tiebreakers.” For the secondary tiebreaker, count only the army points’ worth of models within the kill box 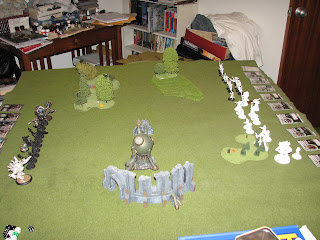 I set up my Cygnar first. Working from left to right, I put the Lancer on my left flank with Rowdy beside him. Junior stood behind them. The Stormguard formed a line in the centre with Nemo and the Squire behind them. The Thunderhead held the right flank.

Opposite them from left to right were the Sentinels + Unit Attachment with the Magister beside them. The Griffon and Vyros held the centre but were back a bit. In front were the Invictors + UA with the Manticore opposite the Thunderhead. 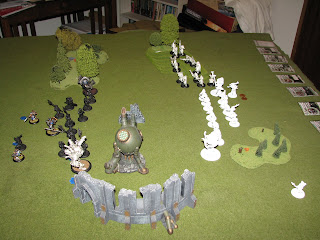 The Invictors run into position. Vyros casts Mobility, advances and then casts Inviolable Resolve on the Invictors while the Griffin advances alongside him. The Arcanist advances and gives the Manticore a focus point with Power Booster. The Manticore then runs forward in front of the trees. The Sentinels run forward with the Magister behind them.

Cygnar
Nemo puts 5 focus on the Thunderhead after grabbing a point from the Squire, and then upkeeps electrify. The Stormguard advance followed by the Journeyman who recasts Arcane Shield on them to give Nemo a power token. The Lancer and Squire both advance with the Lancer putting itself in cover, followed by Nemo who advances and casts Chain Lightning through the Lancer into the Invictors. Their armour is up to the task and it does nothing. The Thunderhead then advances and unloads on the Manticore, but bad damage rolls result in only 8 damage to its power field.
Retribution 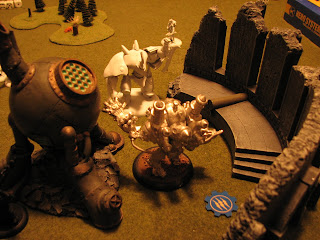 Vyros puts 3 focus on the Manticore and upkeeps Inviolable Resolve. The Arcanist activates first,advances to the Manticore, and gives it Conetrated Power. The Invictors advance and use their mini-feat Extended Fire to get +4 range. They have a mediocre round putting only three damage on the Lancer and killing just two Stormguard. The Sentinels, Magister, Vyros, and the Griffin all advance. The Manticore spends a focus to give itself +3 STR and then charges the Thunderhead. It combo-strikes the Thunderhead for 12 damage. Electrify goes off and pushes the Manticore back 2 inches, although the POW 14 hit does nothing. The Thunderhead loses no systems.

Nemo puts 4 focus on the Thunderhead and takes one from the Squire. The turn starts with Nemo activating and casting Disruption Field on the Thunderhead, before following up with another Chain Lightning on the Invictors. Like last time the Lightning bounces off. The Thunderhead does better, moving up and pounding the Manticore into the ground with two focus left over. The Stormguard charge and run, killing an Invictor, with Ol' Rowdy running into position behind them. The Journeymen casts Arcane Shield again.
Retribution 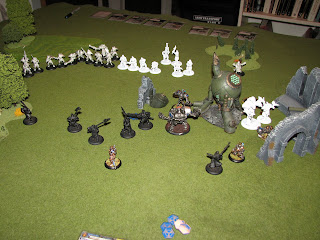 Vyros put 1 focus on the Griffon and upkeeps Inviolable Resolve. The Invictors advance, fail to kill the Stromguard tying them up in melee, do 3 more points to the Lancer, and manage to kill another Stormguard with their shooting. Vyros casts Mobility and charges the Arcanist, cleaving him in half. The Griffon runs to engage the Thunderhead while the Magister runs to the centre. The Sentinels advance around some more, still keeping out of charge range of the Stormguard.

Nemo puts 5 focus on the Thunderhead and grabs the last one from the Squire. The Thunderhead then walks out of combat with the Griffon, takes 2 points of damage from the free strike, and then starts shooting. At the end the Griffon is still there, although its Right Arm and Movement are both crippled. Nemo sends yet another Chain Lightning through the Lancer at the Invictors. Even with boosting damage and getting 7 hits he only kills one.The Stormguard charge and kill two more Invictors. Ol' Rowdy runs. the Journeyman casts Arcane Shield once again on the closest Stormguard. The Squire and Lancer advance.

Vyros upkeeps Inviolable Resolve. The Invictors retaliate, killing 2 Stormgaurd and doing 6 more points to the Lancer. The Sentinels edge forward a bit more, content to let the Invictors handle things. The Magister casts at the Lancer and does no damage, but is able to push it back 2 inches. The Griffon advances into melee range of the Thunderhead and does nothing. Vyros casts Mobility, charges the Thunderhead, and destroys it single handedly. 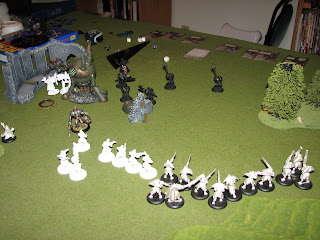 Nemo puts 5 focus on Ol' Rowdy. Nemo aims and shoots Vyros for 2 points of damage, then Locomotions Rowdy 3 inches. Rowdy charges Vyros but is 1/4 inch short to get into engagement range, and so his activation ends (ouch). The Lancer advances and kills an Invictor. The Stormguard retreat back. The Journeyman advances up to cast Arcane Shield on Ol' Rowdy to try and help him weather the oncoming storm. 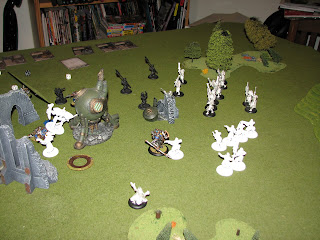 Vyros upkeeps Inviolable Resolve. Vyros wrecks Ol'Rowdy with solid damage rolls. The Griffon advances to screen Vyros. The Magister misses the Lancer while the Invictors kill a Stormguard. The Sentinels sense their moment and run. 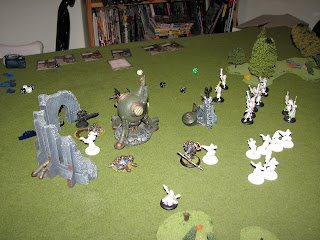 Nemo moves and shoots at Vyros through the doorway, but the shot misses. He then hits Vyros with a Chain Lightning spell that bounces off the Dawnlords armour. His second Chain Lightening misses. The Journeyman shows his mettle by advancing and shooting Vyros, reducing him to 6 points of life. The Stormguard charge and wreck the Griffon. The Lancer is less effective and does nothing except tie up Invictors. The Squire advances and blocks the door.

Vyros upkeeps Inviolable Resolve. Vyros casts Mobility, advances, and destroys the Lancer. The Invictors advance and kill a Stormguard. The Sentinels charge and kill 2 Stormguard, at which point the final survivor fails his CMD check. The Magister advances and does 3 points of damage to the Squire, dragging it 3 inches forward.

Nemo advances up the stairs, shoots at Vyros again, and again misses. He casts Chain Lightning twice but doesn't even kill anyone as it bounces off their ARM. The Journeyman makes the unwise decision to kill a Sentinel. 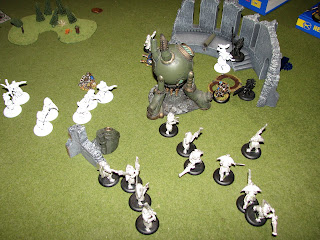 The Sentinels kill the Journeyman while the Magister casts and misses Nemo. The Invictors advance. Vyros casts Mobility, charges Nemo, and one shots him.

Well that was kind of brutal. I was doing ok there for awhile. The Stormguard were stymying both the Invictors and the Sentinels and the Thunderhead was doing ok. But then I made my first big mistake in not moving the Thunderhead back far enough when shooting the Griffon. I was paranoid of giving it cover from the Thunderhead when I should have been paranoid of what Vyros could do to it. My second mistake was trying to charge Vyros with Ol' Rowdy instead of just destroying the Griffon. With the Flank bonus gone Rowdy probably would have survived Vyros beating on him. It also didn't help that I just couldn't roll above a 7 for damage with my Chain Lightnings. I figured I could cut down the Invictors with just the shear volume of fire, but with Inviolable Resolve on them that just wasn't happening. I should have recognised that as well.

The rest of my army did a little better this time but, again, Vyros was the go to guy to get things done. He does have other spells in his list... I just haven't managed to figure out a use for anything but Invioable Resolve and Mobility. I think I have to do a bit of experimenting. On the other hand, I finally won a game! Yay!
I don't know if the Magistar really fits with this army. I'm thinking of dropping him and maybe adding in one of the Eirysses, maybe a Soulless or two. I've actually been playing at 33 points because of what I've got built but I don't think it's been making that much difference. I've got a little room to play.
Posted by Defenstrator at 12:09