It's been fun so far, but now it's time to increase the points. We each had ten points to spend, which could only be added to the battlegroup. For me it was easy. Magnus is the only one that can take his unique Renegade light warjack, and it is ten points exactly so it went straight in. It stands out on a number of levels. It's the Mercs only arc node, it can really grind through things in melee with both Critical Shred and Sustained Attack, and it has a one shot Rng 14, POW 16, AOE 4, auto-knockdown gun.

Myantek decided to add more control aspects to her army with a Gorgon. Anything shot by it becomes -2 SPD, which should give her even more options with all the movement shenanigans she already has. 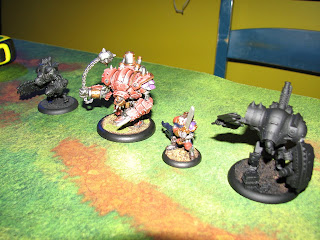 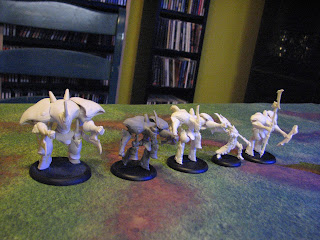 At 10 points the scenario continues to be Mangled Metal. We fight until the enemy caster is dead.

I won the roll and decided go first. Myantek decided to pick the side with the trees to hide behind. Magnus put Snipe (+4 Rng on target model) on the Rover, Blur (+3 Defense against range and magic attacks) on the Renegade, and Death Ward (+2 ARM and pick hit locations) on the Mangler. He then charged the a Retribution jack and moved 8 inches before his turned ended with the failed charge. The Mangler, Renegade, and Rover all ran.
This probably sounds familiar to the other games but he's an upkeep caster. It's what he does.

The turn started with the Chimera Apperating (place completely within 2" during the upkeep phase) forward. Helynna cast Rhythm of War (Warjacks in the battlegroup can advance 3 inches after all models have activated) and Deceleration (+2 ARM vs Ranged and Magic attacks.) and advanced. The jacks all ran forward and the used Rhythm of War to shift around a bit. 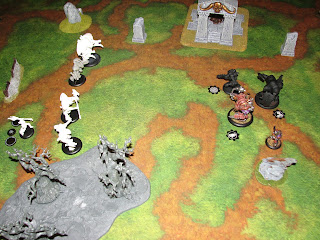 Magnus upkept his spells for free thanks to his Resourceful ability. I decided to go for it and try and live them dream, and assigned one focus to both the Rover and Renegade. After doing some measuring to see if everything was in range the Renegade advanced and shot its Obliterator shot at Helynna. It hit directly and knocked her down doing 13 points of damage. Helynna spent a focus to abosrb five damage.

Magnus then cast Arcantrik Bolt (Cost 2, Rng 10, POW 12, A warjack damaged becomes stationary for one round) through the Renegades arc node, boosting to hit and then damage. Helynna took 11 more damage points and spent her last focus to reduce that to 6 and live.

Finally the Rover advanced and shot Helynna with its boosted POW 14 gun and that was that. 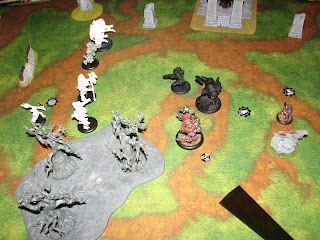 Well I went for it and it paid off. Myantek had made sure she wasn't in charge range of any of my models and was planning to start shooting me up next turn. But Helynna was hanging out in the open and I was able to put all my shots into her. The lesson? Assassination wins games
It wasn't a great game though, so we're going to be playing it over again next week and put the lessons learned into action.