I had finaly picked up my second Deathstalker, so Myantek and I decided to have a rematch. She had the same army as our last report while I used essentialy the same one but added the Deathstalker and a Raptor while dropping the Feralgeist and a Forsaken. I had to groan when I saw the scenario rolled though. Mosh Pit.
Circle: 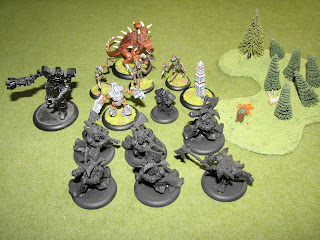 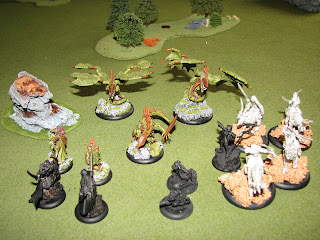 Lylyth, Messenger of Everblight
Teraph
Seraph
Seraph
The Forsaken
Shepherd
Deathstalker
Deathstalker
Deacon + 3 Raptors
Swamp Gobbers
500 points.
Scenario
Mosh Pit - Mark a 14" diameter circle on the the table. This is the Mosh Pit. Starting on the first players thirs turn, a player wins when he ends his turn in control of the Mosh Pit. A player controls the Mosh Pit is he has one or more models completely within the Mosh Pit and his opponent has no models completely in the Mosh Pit. For a unit to control the Mosh Pit, all models in the unit still in play must be completely in the Mosh Pit. A warrior model must have a CMD greater than 1 to control the Mosh Pit. Ignore wrecked or inert warjacks, wild warbeast, and fleeing models when checking for control.
Set Up
The field was relatively open, with some small tree templates and rocks on each side. Dead centre was a large forest template and this was the point we would be fighting over. 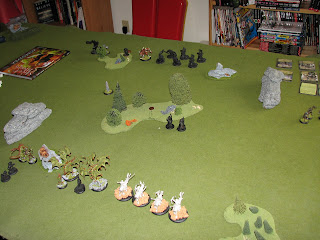 Myantek won the roll and elected to go first. From left to right she set up the Wold Warden, Baldur (in some trees), Warpwolf, and Tharn. I set up off centre from her army, with the idea that I could refuse on flank and push in with the Raptors while the Seraphs supported through the trees.
Myantek then placed her advance deploy troops. The Sentry Stone far forward and opposite Lylyth, and the Wold Watcher out of harms way beside the Wold Warden. I placed my two Deathstalkers behind the woods to take advantage of their Hunter ability. This is meant they were supported by the Seraphs and they could act as speed bumps so my Raptors could counter charge.
Turn 1
Circle
The turn started with Baldur casting Earth's Blessing on the Warpwolf, casting Rapid Growth and putting the template down half way up the field, and then using Forest Walker to teleport into it. The Woldwarden trampled for free due to Baldur's Elemental Mastery and cast Undergrowth. The Woldwatcher moved forwar and riled for one fury. The Warpwolf took +2 ARM and ran into the Rapid Growrth template, with the Ravagers running up beside them. The Mannikin mode forward towards the table centre.
Legion 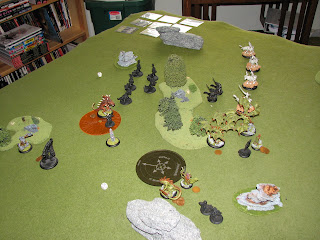 I also led with my warlock. Lylyth cast Slipstream, moved forward, and shot Bladur for 8 points. Baldur transfered this to the Woldwarden. With the second shot Lylyth picked off the Manniken. The Teraph was who was the benficiary of the Slipstream moved up beside Lylyth and shot at Baldur as well. This proved to be just short, but the deviation hit the Sentry Stone. A boosted damage roll put 2 points on the stone and the Teraph cast its Counterblast animus before ending its activation. The Gobbers finished things on that side of the board by putting down a smoke template in front of Lylyth and the Teraph.
Seraph #1 cast Slipstream and moved up, dragging Seraph #2 with it. Seraph #2 then moved up and shot at the Ravagers, wounding two of them. The Forsaken then grabbed the fury off Seraph #2 while the Shepherd moved forward between the Seraphs and Lylyth. After that the Raptors moved up, but were out of range and used the second move to repostion. The Deathstalkers activated last, with the first killing one wounded Ravager but not quite able to finish the other, and the second missing its initial attack.
Turn 2
Circle
Baldur leeched and cut himself for the one fury he had spent to transfer. Upkept Rapid Growth but dropped Earth's Blessing on the Warpwolf. A Mannikin appeared in front of the Sentry Stone opposite Lylyth. It activated first and moved up beside Lylyth, then exploded into a forest template. Baldur Forest Walked to the template and the Teraph Counterblasts with its tail. It missed (big surprise). Bladur boosted and hit with his first attack, but Lylyth transfered the 10 points of damage to Seraph #2 which destroyed its Mind. Baldur then bought another attack, boosted to hit, and smacked Lylyth. But luck is with me and Myantek rolls a 3 for the damage roll. Bladur's last attack roll is double ones, he feated Broken Earth, and that is the end of his activation. 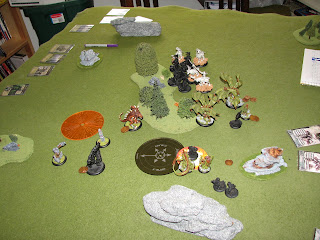 The Woldwarden then moved up and shot Earth Spikes at the Teraph. Myantek rolled a critical and the template caught Lylyth as well, knocking both the Teraph and her down. Myantek then kicked herself for rushing and not doing this first. Both the Teraph and Lylyth took 4 points of damage. The Woldwatcher and Warpwolf simply repositioned themselves while the Ravagers charged the two Deathstalkers and devoured their blighted hearts.
Legion
Lylyth leeched and then cut herself for the final fury point lost to transfering. She then sacrificed her action to stand up and moved away from Bladur. Bladur made the freestrike, but this was transfered to Seraph #1 which lost its Mind as well Lylyth then heals both the Seraphs a point and feated her Feast of Slaughter. The Teraph then unengaged itself from Baldur, who had no fury left. Between the Seraphs + aiming + feat the curtain closed on that episode rather quickly. 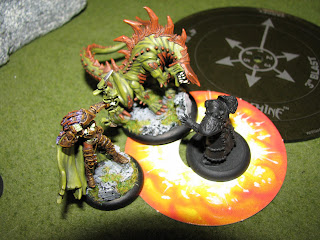 Afterward
Defenstrator
Well Myantek went for it, but just a little too fast. If she had led with the Woldwarden Lylyth would have been flat on her back and waiting for Baldur's big stone sword
What was annoying is that I had been watching for it. Lylyth was out of range of the Sentry Stone so I thought I was safe. I had forgotten that while the range of the Stone to steal fury is 8", the Mannikins can exist up to 10" away. What is more I had placed the Gobber Smoke in such a way that the Mannikin was able to get through it, leaving Baldur to swing at Lylyth with no penalty. I think my plan was generaly working, but the Sentry Stone adds such massive assassination range to Bladur that I didn't have time to execute it. The game was over before the Raptors could counter attack the Tharn or try to out flank the Warpwolf.
Myantek
I shoulda' used the Woldwarden first. I honestly wasn't expecting the critical knockdown because it doesn't happen that often but it would have been nice. The measurement to get Baldur beside Lylyth was so fiddily that I just wanted to be sure I could do it and forgot that I could get the Woldwarden close enough to throw in an Earthspikes. Ah well, play more often and I'll probably remember stuff like that.
With Mosh Pit it's usually a pretty easy scenario win for Baldur but Defenstrator's Raptors meant that keeping the zone empty on my turn was going to be a lot harder. When Lylyth came in range I decided to just go for it. I was hoping to roll high on the first hit to get the -3 DEF going but Baldur whacked her one for good and then my luck left.
Posted by Defenstrator at 20:27