Cygnar vs Retribution of Scyrah

It's been awhile since we put up a game. Between the Hordes MKII field test and holidays we were just pretty busy. But now we can get back on our regular schedule. 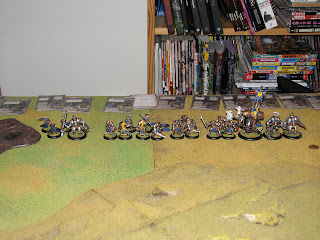 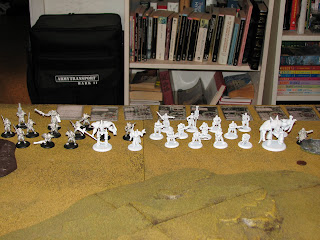 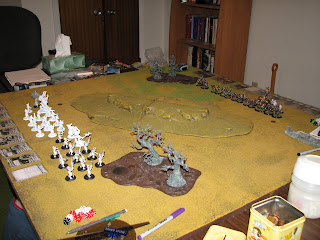 Mark a 24˝ square centered on the table parallel to the board edges. This is the kill box.
Victory Conditions
At the end of each player’s own turn, starting on the first player’s second turn, a player loses the match if he ends his own turn with any friendly warcaster or warlock not within the kill box.
If time runs out before a player has won the match via scenario or assassination victory, break the tie using only the assassination and secondary tiebreaker rules outlined in “Victory & Tiebreakers.” For the secondary
tiebreaker, count only the army points’ worth of models within the kill box.
Setup
I won the roll to go first. On the left flank were the two Chargers with the Centurion to support them. Behind the Chargers and Centurion were Strageways and the Mechaniks. The Sword Knights held the centre with Haley and the Squire centre right. The Lancer held the Swordknights rigth flank with the Black 13th taking cover behind it.
On the opposite side Myantek set up the Sentinels on the left supported by the Griffon. Vyros was centre left beside the Griffon and the Invictors were setup beside him. On the right was the Manticre with the Arcanist behind it and the Magister on the right flank.
Turn 1
Cygnar 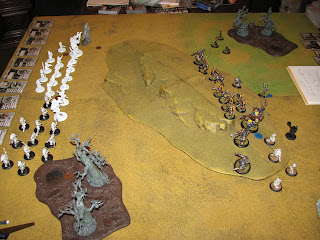 Haley assigns focus to all the warjacks and they all run to the centre hill. The Sword Knights run onto the hill as well while Haley and the Squire advance behind them. Haley puts Arcane Shield on the Centurion. The Black 13th run to the left flank.
Retribution
Vyros assigns focus to the Manticore. The Sentinels run and pair up. The Invictors advance but their guns are just short of the Lancer. Vyros casts Mobility and advances, then puts Inviolable Resovle on the Sentinels. The Griffin advances up beside him. The Manticore advances and thanks to Mobility is in range of the Lancer which is shoots and hit, but only does 2 points of damage. The Arcanist and Magister advance behind.
Turn 2 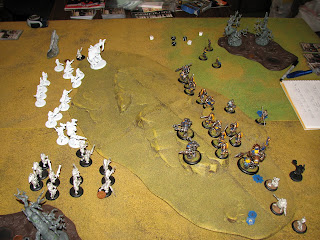 After some eyeballing and measuring of control area Haley pulls one focus from the Squire, upkeeps Arcane Shield, and assigns the Chargers 3 focus each. The Charger #1 moves into the centre and is in range of Vyros. Two solid shots leave him almost dead. The second Charger moves into the centre and is in range. Vyros dies.
Afterward
Defenstrator
Well that was a sudden ending. My original plan was to give the Chargers 1 focus each and have them gun away while slowing down Myantek's army with Temporal Barrier. But then she put Inviolable Resolve on the Sentinels, which pushed their armour up to the point where that wasn't practical. I then decided to hammer the Griffon and try and deny it's use to Vyros, but realised that Vyros himself wasn't that far beyond the light warjack. Thanks to the Chargers Powerful Attack the shots hammered home and that was game. While a good demonstration of why it's a bad idea to leave your warcaster to exposed it didn't make for a satisfying game, so we're planning a rematch quite soon.
Myantek
Huh, the Chargers have guns. Kinda forgot about that. I had intended to put Vyros behind the Griffon but then when the time came to actually place the light 'jack totally forgot where it had been supposed to go. Vyros seems to be a front line caster, but maybe not that far to the front.
Posted by Defenstrator at 12:37