Been a long dry spell since the last battle report. We've mainly been playing Warmachine so we decided to give our Hordes forces a spin.

Summary: Players attempt to destroy two objectives on the opponent's side of the board.

Place four large based objectives 14" from the back and 14" from the side of the board, with one at each corner. Each player's objectives are non-living friendly Faction models. Each has DEF 5, ARM 20, and 20 damage boxes as well as the following qualities: 360 degree front arc; does not activate; cannot move, be moved, or be placed; does not suffer continous effects, cannot be knocked down or made stationary, cannot be targeted by attacks or damaged on the first round.

The game would last for 80 minutes.

Players earn 1 control point for each of their opponents structures they destroy. The first player to earn 2 control points immediately wins the match. 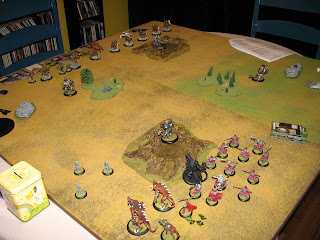 The structures are placed on the table. The large bases are represented by four of my Cygnar jacks.

I set up first with the Raptors on the far left behind the crater, the Carnivean in the centre with Seraph 1 beside it and Shepherd 1 behind that. Lylyth and the Shredder lurked in the forest with Seraph 2 on the far right supported by Shepherd 2.

Myantek set up with a refused flank with the Wolves Oborus in the centre with the Pure Blood to the right. The two Ferals, Kaya, and the Argus were further right opposite Seraph 2. The Shifting Stones advance deploy 6" in front of them. 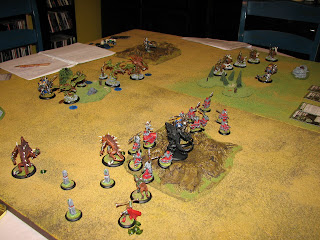 The timer is set and starts counting down the 80 minutes. The turn starts with the Raptors running and then taking their free move to get 23" up the board. And for the last time I note, since errata has just been released that changes this rule so that you can't get the free move after you run. All the beasts run forward with the Seraphs keeping the rear of their bases in the trees. Lylyth moves behind the forest and puts Spiny Growth on the Carnivean and Tenacity on the Seraphs. The Shredder advances beside Lylyth and puts Tenacity on her. The Shepherds run behind behind the Seraphs.

Feral 1 takes +2 ARM and advances into the Shifting Stones. Feral 2 becomes Ghostly thanks to the Pure Blood's ability and runs through the crater. The Pure Blood also turns Ghostly and walks into the centre of the crater to get cover. The Argus advances and puts Tracker on Feral 1. Kaya then puts Occulation on the Wolves to give them stealth, which won't do anything against the Seraphs but will stop the Raptors from shooting them up. She then advances beside the Argus. The Wolves advance through the crater to support the Pure Blood and Feral 2. The Shifting Stones then teleport Feral 1 forward. 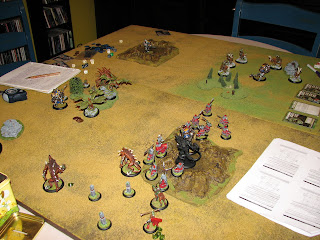 Lylyth leaches everything. The Shredder puts Tenacity on Lylyth. Lylyth Slipstreams and advances into the forest, dragging Seraph 2 forward 2". She shoots Feral 2 for 2 points of damage and then casts Parasite on it, automaticly hitting thanks to the Witch Mark on her bow. With Feral 2 now at -3 ARM thanks to Parasite, and Seraph 2 now within 10" of Feral 2 thanks to being Slipstreamed up by Lylyth, Seraph 2 aims and unloads 4 shots into Feral 2. I'm expecting it to disintegrate under this onslaught but the rolls are terrible and Seraph 2 hits once for 11 more points of damage.

Seraph 1 Slipstreams and moves to drag Lylyth back. Shepherd 1 takes the fury the Shredder. The Carnivean moves behind the Seraphs. On the opposite side the Raptors charge the structure but role low for 14 points of damage. 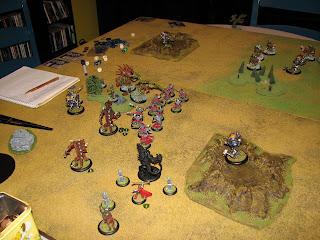 Kaya leaches to full and upkeeps Occulation. She advances and casts Spirit Fang at Seraph 2 but misses, then heals Feral 2 for 1 point. Feral 2 then warps for +2 SPD and charges Serpah 2, killing it. The Wolves charge Seraph 1 and use the Power Swell for an extra die of damage, hammering it down to 6 points of life. Feral 1 takes +2 ARM and runs forward. The Pure Blood becomes Ghostly and advances. 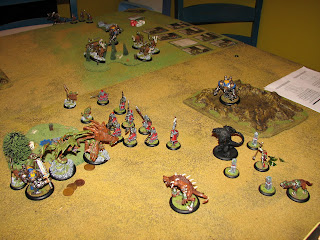 Lylyth leaches full and upkeeps Parasite. She activates first, heals Seraph 1 for a point, Slipstreams, moves and drags Seraph 2 out of engagement with the Wolves. She then feats and shoots at Feral 2, and somhow misses. She buys another attack and hits. By doing this I screwed up, becuase I somehow got confused in my head over which Feral I had shot up the turn before. I should have shot Feral 1 and put Parasite on it since my idea was to kill both of them in one turn.

Needless to say the Carnivean charges the wounded Feral 2 for free thanks to Lylyth having shot him with her bow. The assault spray attack hits both Ferals, and the Carnivean casually tears apart Feral 2 and casts Spiny Growth. Shepherd 1 charges the Wolves and kills one, trying to tie them up. The Shredder goes Rabid, advances through the trees, and kills two more. Seraph 1 then advances and pumps three shots into Feral 1, leaving him with just his body. Shepherd 2 then advances and heals the Seraph for a point. The Raptors destroy the structure and then use their free move to advance towards the other one. 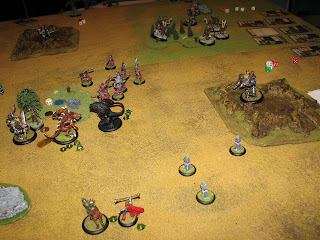 Kaya leaches to full. The Wolves charge and kill Shepherd 1 and the Shredder. Lylyth reaves a fury. The Pure Blood warps for +2 Strength and charges the Carnivean, hurting it badly and destroying its Mind, but taking 7 points of damage in return from Spiny Growth. The Argus advances and casts Tracker on Feral 1, giving it pathfinder and 360 degree LOS. Kaya then advances, heals Feral 1 for five points, uses her feat, and then heals it for five more points. Feral 1 then warps for +2 Strength and charges the Carnivean, and thanks to Tracker is able to engage Seraph 1 in its rear arc. Burning the rest of its fury it finishes both the Carnivean and Seraph 1.

Things are looking bad, with Lylyth so close to two heavy beasts with nothing to support her except a Shepherd, but then the alarm goes off and time is called, meaning Legion wins on scenario.

Tight game. I had expected to kill both the Ferals in one turn, which would have left only the Pure Blood to properly tear down the Carnivean. The Wolves might have done it eventually but by then the Raptors would be at the next objective. Unfortunately I screwed up, and that left Feral 1 alive which not only finished the Carnivean, but thanks to Tracker was able to destroy my other Seraph at the same time.

The thing that probably hurt me the most was that I was going for the mission objective. Since I was 10 points down in that fight Myantek was just able to power through me, hoping to kill my army and then just destroy the unguarded structures. Luckily for me this wasn't a four turn game or she probably would have.

Myantek
I needed one more turn. I could've won with one more turn I think.
Looking at this scenario, and Defenstrator's army, I felt I had two choices at the beginning. Only the Wolves can act independantly. They could've gone for the post on the right of the board, trying to get through the Raptors, and then using Power Swell on the charge at the objective. I probably could have tied up the Raptors for a bit, but they would've been too far away for Occulation and there's no guantee that they would've destroyed the objective on one charge. The other choice was just to go through Defenstrator's army on the other side. Clearing out some of the heavies and leaving either Lylyth or the objective undefended. I went with the second choice.
It almost worked. The Raptors had been unable to destroy the objective on the charge so my Wolves had free rein for two turns. Keeping a Seraph occupied (almost killing it too) and allowing my heavies to clear out his heavies. If I'd been able to get to my next turn and kill Lylyth it'd be insta-win. Or the Feral or the Pureblood could probably have destroyed the objective in a turn and that would have brought a tie, that I think I would have won due to killing more stuff. That's assuming that the Raptors wouldn't have been able to destroy the second objective but I think that's a fair assumption.
Posted by Defenstrator at 07:21