It's been a long time since the last battle report. Myantek and I have finally gotten round to another one. Wanting to make it straightforward we played the scenario Killbox and just had at each other.

Also we were doing times turns of 10 minutes with one 5 minute extension during the game.
Setup 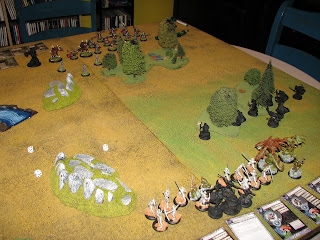 I won the roll and elected to set up first. The strength of my Rhyas army is in melee and I wanted to close the distance relatively quickly. I set up with Rhyas and the Shredder in the centre with the Swordsmen around them. Behind them was the Vessel while the Carnivean and Soldier set up to the right in the trees.

Myantek put her Pureblood on my left with Kaya and the two Ferals flanking her in the centre. The Wolves set up behind the forest.

Rhyas casts Occultation on the Swordsmen and Rapport on the Carnivean before advancing. The Swordsmen run into the centre while the Shredder walks up and puts Tenacity on Rhyas. The Spawning Vessel moves forward and camps out behind the Swordsmen, although it's starting to lag behind. The Carnivean, Nephilim Soldier, and Striders all run up the right side, waiting to ambush anyone who moves into the forest. The Shepherd runs forward and takes position behind the Carnivean. 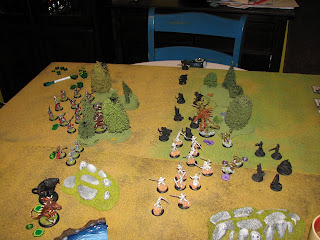 Rhyas reaves the the fury and upkeeps Rapport. The Striders make the first move and line up to CRA the Argus for 10 points, then Reform back into the forest. The Carnivean puts Spiny Growth on the Soldier and moves forward to spray Feral 2, but misses with a boosted to hit roll. The Swordsmen then run and spread out, blocking the charge lane to the Carnivean. The Shredder moves up a bit and puts Tenacity on Rhyas again while the Shepherd advances and uses Condition to take the fury off the Carnivean. Rhyas then advances and puts Spiny Growth on the Carnivean. The turn ends with the Soldier just riling for 2 fury and the Spawning Vessel advancing some more. 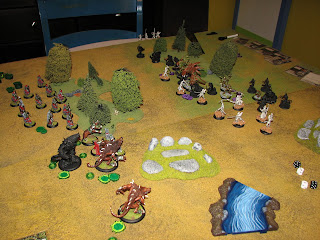 Kaya reaves all the fury and upkeeps Occultation. The Argus gives Tracker to Feral 2 again and advances towards Kaya. Feral 2 warps for +2 ARM and charges the Swordsmen in front of the Carnivean, killing 2. The Vessel is out of range to collect Corpse tokens. Feral 1 warps for +2 Str and does a Push power  Attack on the Pure Blood, shoving him forward and inch The Pureblood now has the movement to get through the onstructive part of the hill while Ghostly, so he advances and sprays, killing 2 more Swordsmen but missing the boosted attack roll on Rhyas. Kaya then activates anduses Spirit Door on Feral 2, heals the Argus for two points, uses her feat Wild Mastery to grab fury off her beasts, uses Spirit Door on the Pureblood, casts Soothing Song, and heals the Argus a bit more. The Shifting Stones then heal the Argus for 3 points.

Myantek had used her extension this turn but still ran out of time before she could move the Wolves.

Rhyas reaves to full and upkeeps Rapport. The Striders advance and shoot the Argus through the forest for 5 points before reforming back to the Swordsmen. Rhyas casts Dash, Spint Growth on the Carnivean, and advances forward a bit. The Swordsmen chrage/run with one making it to the Shifting Stones and killing one. The Shredder advances and puts Tenacity on Rhyas. The Carnivean puts Spiny Growth on the Soldier and advances forward to spray the Argus for 12 more points but bounce off another Shifting Stone. The Soldier advances up behind the Carnivean. 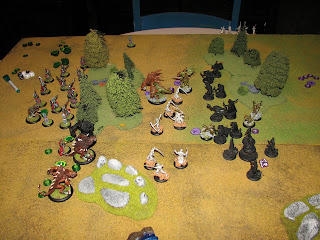 Kaya reaves full and upkeeps Occultation again. The Shifting Stones teleport back and are joined by the retreating Argus. The Pureblood turns Ghostly and advances to the front Swordsman, mushing him. Feral 2 warps for +2 SPD and to my horror is just withing charge range of Rhyas, managing to just reach with the 1/2 inch melee range. Boosts to hit at MAT 9 due to Kayas Pack Hunters ability, and misses. The second attack does hit Rhyas for 12 damage. She boosts to hit with the third attack, and misses again. Feeling thoroughly robbed Kaya Spirit Doors Feral 2 in front of her and casts Soothing Song. Feral 1 advances and riles for 2 fury while the Wolves shuffle up. 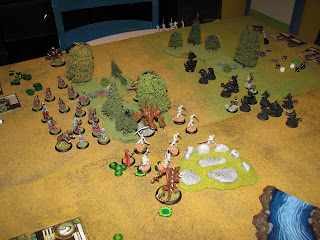 Rhyas reaves and upkeeps Rapport again. The Nephilim Soldier casts Massacre on the Carnivean and advances into the trees in front of the Wolves. With its free chrage the Carnivean goes barreling into the Pureblood. It's assaulting spray hits the Pureblood but misses Feral 2 behind it. The Carnivean then tears apart the Pureblood. Rhys casts Dash, uses her feat, and camps some fury. The Swordsmen, including the Champion and Abbot chrage Kaya and Feral 2. Kaya is missed with all attacks but the Feral is cut down. The Striders advance to support the Soldier.

Kaya reaves and upkeeps nothing. She also starts the turn and advances into and kills the Abbot, Chapmion, and a Swordsmen. The Wolves chrage and kill another Swordsmen but can't quite get to the Carnivean. Feral 1 chrages the Carnivean now that the lane is clear and promptly rolls double 1 to miss the attack. It attacks some more and mauls the Carnivean but it's not enough for the kill.

At this point time runs out. With both warlocks alive it comes down to points, which I win becuase of the death of the two Warpwolves.

I would have won even if Myantek had killed the Carnivean, but by only 1 point, so a pretty close game really. Not to mention that it was only due to luck that Rhyas wasn't torn into little pieces. I really thought I was far enough back, but it's hard to tell with that tiny control area.

So, stuff I learned. If you're taking the Spawning Vessel either put aside the 3 points for the whole shebang or don't bother. I got two corpse tokens all game. The problem of taking the minimum is that it doesn't move fast enough to keep up and the range is shorter, with the two problems compounding with each other. Also, I realised afterwards I could have moved and feated with Rhyas first, then used the Massacred charge attack into the Pureblood to place the Carnivean at the back of its base and in range of Kaya. I'm pretty sure MAT 8 and boosting could have finished the job. Instead I relied on the Swordsmen, and even the Champions MAT 8 just couldn't do the job.

I feel like my dice deserted me.  C'mon!  Rhyas was standing right there!  The Feral should have been able to tear her apart.  I had a pretty good set up for Kaya.  She was able to send beasts out to atack and then bring them back into a protected zone and away from stuff that could really do them harm.  (Though the Carnivean should have been at least mostly dead... stupid dice.)

The only thing that I didn't like about my game is that I kept running out of time before moving my Wolves.  They eneded up behind some trees and out of it when I had intended that they jump out and attack something.  I just never got the chance.
Posted by Defenstrator at 00:01