So we got lazy and played another Kill Box scenario.  Didn't want to go searching for the new ones and just wanted to get playing.  We played this one with Death Clock.  This is where we both have 30 minutes to complete our game, and if you run out of time you automatically lose. I like having a set amount of time to play but was having trouble with set turn lengths. 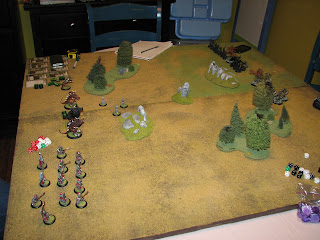 I won the roll and decided to go first.  The Wolves were placed on the far right while Kaya and the Warpwolves took up the centre.  The Argus hung off to the far left.  With advance deployment the Stones were placed in front of the Ferals.

On the  Legion side, Typhon and the Shepherd took up centre placement while the Warmongers faced down the Warpwolves.  On the left flank Thagrosh surrounded himself with the Legionaries and the Carnivean with the Shredder following close.

The Argus casts its Tracker Animus on Feral 1 and then moves into the woods.  Feral 1 warps to increase Armour and follows the Argus through the woods. On the other side of the board the Wolves run forward to mas around a rock further up the field.

Kaya moves into the Stones and casts Occultation on the Wolves to get rid of some Fury.  She then casts Tracker on Feral 2 and Soothing Song to get rid of some built up Fury.  The Pureblood warps for Ghostly and runs just in front of the Stones.  Warpwolf 2 riles for 3 points of Fury and runs to the woods.  With the rest of her battlegroup in the trees, Kaya is teleported there by the Shifting Stones. 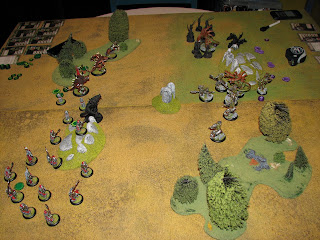 Thagrosh starts the turn.  He casts Fog of War then Draconic Blessing on the Legionnaires and Spiny Growth on the Carnivean.  He uses his free animus to cast Spiny Growth on himself then moves up the field.

The Legionnaires run in front of Thagrosh to surround him.  The Carnivean follows up behind them while the Shredder, after going Rabid, follows behind to cast Tenacity on Typhon.  The Warmongers run straight up the centre.  Typhon riles for 2 Fury and then follows them with the Shepherd close behind.

Kaya is able to leach to full Fury and decides to drop Occultation on the Wolves.  This turn becomes mostly about redeployment as nothing seems to be in the right place.

The Argus gives Feral 1 Tracker and advances through the forest.  That Feral warps for Armour and then follows the Argus through the trees.

On the other side the Wolves run forward to set up a flanking maneuver. 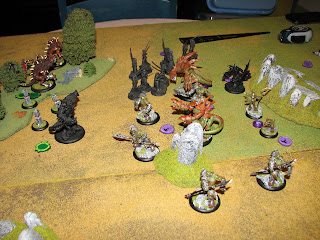 Thagrosh leeches to full Fury and upkeeps both spells.

The Warmongers run to the midpoint of the board to threaten the Pureblood.  Typhon advances and sprays this Warpwolf doing a total of 12 points of damage.  The Shredder goes Rabid and advances forward so it can put Tenacity on Typhon.

The Legionnaires run forward towards the woods with the Carnivean following them.  This beast stops to spray at the Pureblood as well, doing 11 more points of damage.  It then gives itself Spiny Growth.

Thagrosh then advances, gives himself Spiny Growth then puts Tenacity on everything in range.  That lets the Shepherd move forward to remove the Fury from Typhon.

The Stones heal the Pureblood.  The roll was low but they manage to add back 1 point of Spirit.  The Pureblood then gives himself Spellward and moves up to spray the Legionaries, killing 4 of them.

The Argus moves back to give Tracker to Feral 2.  That allows this Warpwolf to warp for Strength and charge a Warmonger and kill it.

The Wolves continue to flank around the right side of the board.  With Kaya's activation to moves toward the trees and grabs both Feral 2 and the Pureblood with Spirit Door. 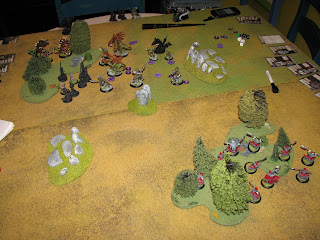 Thagarosh leaches to full Fury and continues to upkeep both his spells.  With their Vengeance move the Legionaries move toward the Stones until they can get a good charge on them.  They manage to destroy one Stone and injure another.

The Carnivean sprays the Ferals, while one is unhurt the other suffers 9 points of damage.  Typhon moves forward to unleash its spray and kills the Pureblood.  Kaya reeves the Fury.

The Warmongers string out through the middle to face off against the Wolves.

More of the same.  Kaya leaches to full Fury and the Wolves continue their flanking run around the outside of the table.

The Argus puts Tracker on Feral 1 and then advances.  Feral 1 advances through the trees to throw the Carnivean at Thagrosh.  The throw doesn't do any damage to the Carnivean due to Spiny Growth but Thagrosh does take 4 points and both are knocked down.

Kaya advances to pull Feral 1 back with Spirit Door and then Heals Feral 2 for 2 points. 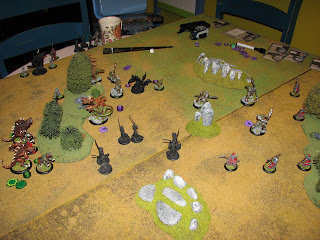 Thagrosh leaches to full Fury and upkeeps both of his spells.  Both he and the Carnivean stand up.  The Legionnaries run around the trees.

Typhon advances and sprays Feral 2 for a total of 11 points of damage.  The Carnivean uses its spray on the Stones but does not harm them.

Thagrosh advances and puts Spiny Growth on Typhon and on himself.  He gives Tenacity to one of the Warmongers.

The Shepherd advances and takes the Fury off the Carnivean.  The Shredder goes Rabid and gives Tenacity to another Warmonger then moves behind Thagrosh.  The Warmongers finally charge and kill 4 of the Wolves.

Kaya leaches to full Fury and I realise I'm running out of time and really need to make what I have count.

The Wolves use their Power Swell and charge into the Warmongers and Legionnaries.  They manage to kill two of each group.  The Argus gives Tracker to Feral 1 and then charges to kill two more Legionnaries.

That last throw against Thagrosh was so effective that Feral 1 decides to to try it again.  However, Typhon is a more difficult object to throw.  He's reduced to trying to use his claws to get through the beast.  He does manage to do 8 points of damage.

Kaya gives Tracker to Feral 2 and then Heals him for 2 points, feats and Heals him for 8 more.  All that Feral 2 manages to do is to advance to prepare for the next turn.

Thagrosh leaches to full Fury but doesn't upkeep anything this turn.  The legionaries use their Vengeance to move into the Wolves but aren't able to do anything to them.  The Warmongers, on the other hand, charge and kill two more Wolves, then the Legionaries are able to bring one down with their regular attacks.

Thagrosh casts Draconic Blessing and Spiny Growth on Typhon and then sprays Feral 2.  He doesn't do anything to the beast.  Typhon moves to Feral 1 and does 9 points of damage and the Carnivean kills Feral 2.  The Shepherd removes its Fury.

The Shredder goes Rabid and puts Tenacity on itself then moves to stand behind Typhon. 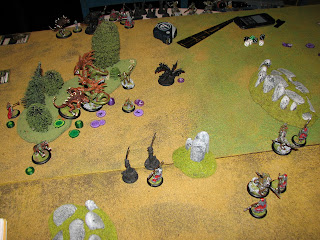 Kaya leeches to full Fury.  Unfortunately, Feral 1 frenzies and can only hit Typhon for 6 points.

The Argus charges the Shredder and kills it, Kaya uses Spirit Door to bring both the Argus and the Feral back to her position.  The Wolves kill another Legionnaire and wound some Warmongers.  Then my time runs out and Legion wins with the Death Clock in effect.

Myantek:  Once again, I get boxed in by terrain.  I can move through it, thanks to the Argus, but I can't see through it.  That's a bit of a disadvantage when facing Legion.

I really should have been more aggressive with both the Wolves and the Ferals.  Then trying to manage when to use a Power Attack and when to charge in was a balance that I wasn't doing.  I need to play more often to really make the best use of that.  The Carnivean with Thagrosh scares me.  It can certainly bring in the damage and with Death Shroud in effect the Ferals have to warp for Strength just to get their base damage.  Circle has no trouble hitting things, it's the actually damaging something that can be tough.  The two-handed throw is pretty effective with them though.  It's good for things that I know I just can't punch through and then Kaya can pull them out of danger if need be.

Well Thagrosh did what he's supposed to, grind down the enemy. Things were going well while I had the Legionnaires and Warmongers to screen my beasts. Once those got killed or dragged away to stop the Wolves from charging me in the back I wasn't able to beat up on the Warp Wolves without risking a counter charge. Unfortunately for Myantek she took one turn too long to get them into position. This let me spray away and kill off the Pureblood at range.


I like the list, but it would have a harder time if the scenario forced the army to spread out more. That would leave more holes for Cricle to exploit, and decrease the strength of the brick formation.
Posted by Myantek at 08:56