Baldur vs Rhyas - Process of Elimination

Defenstrator put together my Gnarlhorn Satyr so I finally have the chance to try him out. I'd been planning to add him to the Baldur army I've been using (switching out the Warpwolf) and I'm curious to see how he does on the tabletop.
Circle 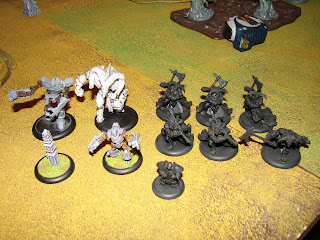 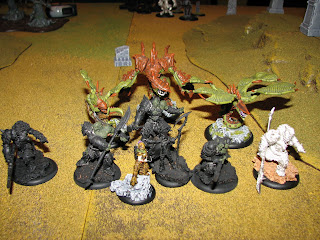 Scenario
The table had been left set up from the gaming night the day before so Defenstrator suggested that we just play Process of Elimination. The table was divided into four sections running north to south. At the end of each player's turn they would receive a victory point if they controled a section. Starting on the first player's third turn victory could be achieved by having collected 3 points. The player can only receive the points for controlling the section once and the normal rules for who controls or contests apply.
The left hand side of the board was one long, low hill with a stand on ruins running down its spine, a single ruin in the centre of the board and the right hand side was a stand of trees at north and south separated by a small hill with a small ruin on it.
I won the roll and elected to go first. I put Baldur front and centre and the Woldwarden a 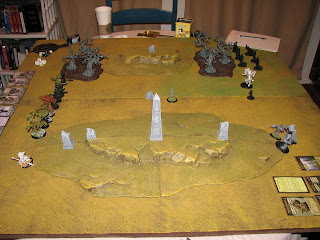 t the far end of his control area behind the hill. The Ravagers camped behind the trees and the Gnarlhorn hung out with Baldur. The Waldwatcher was placed beside the Woldwarden when putting down the advance deployment troops and the Sentry Stone was placed as close to the centre of the table as possible.
Defenstrator put Rhyas slightly off centre of Baldur, closer to the hill than the trees and surrounded her with the Shepherd to her right and the Carnivean on her left. The Sheraph was beside the Shepherd and the Warmongers were beside the Carnivean with the Nephilim beside them. Behind the hill on the left and the trees on right he placed each of his War Chiefs.
Circle Turn 1
A Mannikin popped into existance behind the Sentry Stone to begin the turn then the Woldwarden moved up onto the hill and was followed by the Woldwatcher who put Vigilance on the big guy. The Gnarlhorn simply moved up and riled for two Fury and the Ravagers ran into the trees. Baldur walked forward and toward the hill before casting Earth's Blessing on the Gnarlhorn and Rapid Growth in the area beside the Sentry Stone to make it difficult for the Warmongers to move up the field.
Legion Turn 1 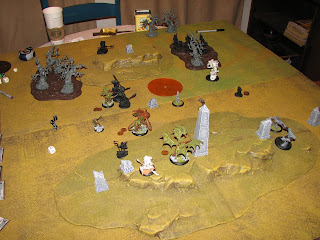 Rhyas cast Rapport on the Carnivean and Slip Stream on herself and then Dash. She moved up 8" and dragged the Carnivean forward. The Warmongers ran forward behind the Rapid Growth forest and both War Chiefs ran onto their respective hills. The Carnivean assaulted the Sentry Stone with a boosted hit and damage on the spray to do 7 points to the rock (apparently Defenstrator hates my Sentry Stone as much as I hate his Seraph).
The Serpah ran (flew?) up the hill and put itself behind the central piller while the Nephilim riled for 1 Fury and ran behind the Warmongers. The Shepherd followed the Seraph up onto the hill.
Circle Turn 2
Baldur leeched to full Fury and upkept both spells as the Sentry Stone created another Mannikin in front of it.
The Sentry Stone was able to steal Fury from both the Carnivean and the Nephilim. The new Mannikin moved forward beside the Warmongers, turned to face them and Splintered into teeny tiny bits. A boosted damage roll produced 9 wounds to the Apostle and 3 wounds to the next Warmonger in the line. The final Warmonger was spared any damage. The Mannikin that had been ignored the first turn moved forward and managed to Root the Carnivean.
Baldur threw an Earth Spikes at the Carnivean with a boosted hit roll. He didn't get the critical and only did 2 points of damage. The Gnarlhorn took up a position slightly in front of Baldur and riled for 2 Fury while the Ravagers spread out in the trees on the other side of the board.
The Woldwarden cast Earth Spikes at the Seraph but missed with his boosted roll. The deviation didn't do anything useful. Finally, the Woldwatcher moved to stand beside Baldur, put Vigilance 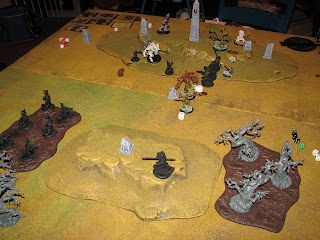 on the Woldwarden and used Stone Form on itself to screen my warlock.
Legion Turn 2
Rhyas leeched the 3 Fury that were left to her and upkept Rapport.
The Seraph used Slip Stream and moved back a bit on the hill to really cozy up to the piller. The Shepherd was dragged forward by the animus before the Serpah began shooting the Gnarlhorn. It hit, getting 5 extra shots, and did 9 points total to the Gnarlhorn. The Shepherd charged the Satyr and did an additional 3 points, nearly removing his Body spiral and putting him into Torpor.
The Carnivean walked forward to spray the Sentry Stone again and managed to kill it. The Warmongers ran onto the hill and stood staring at the Gnarlhorn.
Rhyas put Spiny Growth on the Nephilim and moved in behind the Warmongers. Finally, the Nephilim moved up beside the Carnivean.
Circle Turn 3 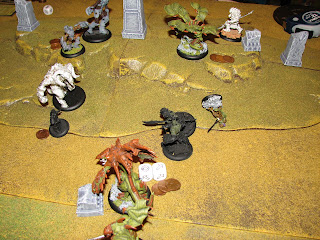 Baldur leeched back up to full Fury and decided to drop both of his upkeep spells. The Gnarlhorn managed to shake off the Torpor.
The Woldwarden cast Earth Spikes at the Apostle. With a boosted hit roll he got the critical knockdown, taking out Rhyas and a second Warmonger as well. The damage was enough to kill the leader of the group and the AOE did 2 points on Rhyas.
Baldur walked up to the Shepherd and killed her easily. He cast Earth Spikes on the prone Rhyas and did an additional 11 points. He then used Broken Earth... Just in case.
The Woldwatcher walked up the kill so he could get a clear view and shot his Elemental Strike at Rhyas. A boosted hit and damage roll meant that the Legion warlock was Fertilizer.
Afterword
Myantek
The debut for my Gnarlhorn and all he does is stand around and get shot... Oh well, I still like him. He does add something to the army: threat range. The Counter Slam is a nice ability and was handy at making Defenstrator think about getting too close to Baldur. It meant that he didn't do much beyond act as Baldur's bodyguard but that was enough this game.
The Sentry Stone was dynamite! It distracted the Carnivean for two turns, stole enough Fury that Rhyas had a blah turn and let the Mannikin nearly destroy the Warmonger Apostle. Then the other Mannikin managed to Root the Carnivean in place for a turn. That's not bad for 25 points!
I tried to convince Defenstrator to place a tree in Rhyas' place for the final picture, but he wouldn't go for it. It's just not that often that the Woldwatcher actually manages to shoot something, much less kill it and turn it into Fertilizer.
Defenstrator
Hmmm. I thought I had it all figured out. Everything was all set up to force Myantek to either move in and engage me or hang back and get shot some more. I even spent Rhyas's last two fury to put Spiny Growth on the Nephilim because I though I could use him to bait out her Ravagers. Instead I end up just a little too close to my Warmongers and Rhyas trips and takes a header due to a little earth tremor. Myantek makes fun of my determined efforts to get rid of the Sentry Stone, but as the one turn showed, you have to get rid of that thing or it ends up dominating the ground the armies fight over. I thought I had killed it fast enough that I could now settle into the rest of the fight. After all, I hadn't taken much damage at that point. But then I got assassinated so the rest of the battle never took place.
I'm sort of surprised at myself. I had learned from playing against Kaya that you need to keep fury on your warlock just in case. It might be conservative, but caution never accidently got anyone killed. But with Rhyas two fury down it felt wrong to damage her just to get fury that I might not even need, and that would stop me from fully leeching next turn. I thought it better to keep Rhyas empty, but then wasn't cautious enough with her placement. Myantek responded with an opening gambit that had no downside even if it didn't knock down Rhyas. And when it did the killing came fast and hard.
Posted by Myantek at 10:57

Your table looks great. It really made the report more interesting to see that. I've got a WM blog as well, feel free to stop by. www.mccryx.blogspot.com