My friend Alex (Indy on the forums) had beaten my Rhyas army last week with his no jack eIrusk army. I wanted a re-match and it seemed a good time to try out Epic Thagrosh, who had just been released this week. We both played semi-themed armies. I had all the wings I could reasonably stuff in, while his army was mostly made of Iron Fangs and Man o' War.
Armies
Legion 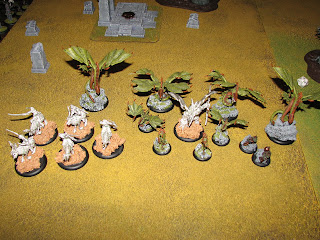 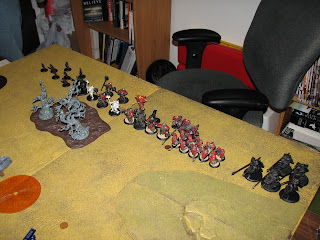 Supreme Kommandant Irusk
War Dog
Great Bears of Gallowswood
Sergeant + 7 Pikemen
Iron Fang Officer & Standard Bearer
Kovnik Markov
Kapitan + 4 Uhlans
Kapitan + 4 Demolishers
Kapitan + 3 Shocktroopers
Capo + 6 Kayazy
Kayazy Assassin Underboss
Scenario
The scenario was Break the Line. The board is diveided into six 14" by 16" sections. A player controls a section if he has one or more models completely within the section and his opponent has none. For a unit to control the section the entire unit must be in it, and models with CMD 1 or less, fleeing models, wrecked warjacks, and wild beasts do not count when checking for control.
Set Up
Indy won the roll and chose to go first. The Kazny were set up on the far left with Markov beside them. Then came the Demo Core who were set up behind the trees. Next were the Man o' War, with eIrusk and the Wardog set up behind them. Then came the Iron Fangs, with the Great Bears behind, with the Uhlans set up on the far right.
My set up put Harrier 1 on my far left, but not as for over as the Kazny. Beside it was Forsaken 1 with Angelius 1, Seraph 1 and Angelius 2 behind the trees. Epic Thagsoh stood in the open with Forsaken 2 beside him and the Swamp Gobbers over 3" behind. Seraph 2 and Harrier 2 were close beside with the Raptors positioned on my far right.
Turn 1
Khador 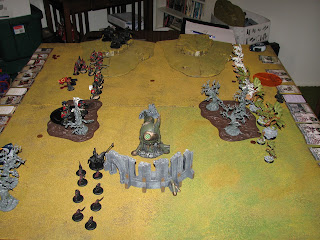 The Kazny run forward with Markov beside them. The Man o' War and Iron Fangs move forward and Shield Wall, while the Uhlans run up the flank. Irusk and Wardog then move up behind the Man o' War and casts Artifice of Deviation in the woods and Tactical Supremacy on the Man o' War. The Demo Core then run through the woods while the Great Bears run up behind the Iron Fangs. The Man O' War then take their Tactical Supremacy 3 inch move. 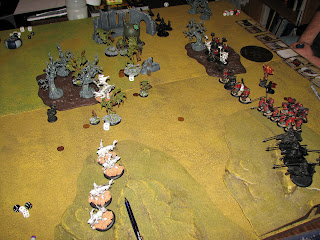 I begin with Thagrosh and start by casting Slipstream, Unnatural Aggression on Angelius 2, and Dragon's Blood on Seraph 2. Thagrosh then moves forward, slipstreaming Seraph 2, and ends with his base partially in the woods. Seraph 1 Slipstreams Angelius 1 and ends in the woods. Angelius 2 then runs forward to the broken wall. Forsaken 1 moves up and takes the fury off Serpah 1. Seraph 2 runs forward and Forsaken 2 move up and takes the fury off him. Harrier 2 runs forward to screen the approach to Thagrosh. Angelius 1 and Harrier 1 run to the centre of the ruin. Finaly the Raptors move up, shoot at the Uhlans doing nothing before backing off a little, while the Swamp Gobbers move up and put the cloud on Thagrosh, Forsaken 2 and Harrier 2.
Turn 2
Khador
Indy doesn't upkeep Tactical Supremacy. The Uhlans advance slightly while the Iron Fangs and Man o' War advance and Shield Wall. The Man o' War shoot at Harrier 2 but are out of range. Irusk and Wardog move up behind the Man o' War and Irusk casts Artifice of Deviation on the ruins beside Angelius 1. He then shoots Harrier 2, reducing it to 1 wound. Then Demo Core in the woods run while the Kazny run beside the wall. Markov then charges through the Artifice into Angelius 2. He gets no criticals though, and only does 6 points of damage. The Great Bears move in tight behind the Iron Fangs.
Legion 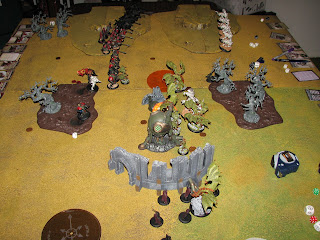 Thagrosh leeches to full and upkeeps Dragon's Blood on Seraph 2. He then starts the turn by casting Glory of Everblight and charging Markov. He smashes him once, I forget that Thagrosh has 2 intial attacks, and buy another attack to finish Markov off. Seraph 1 Slipstreams Angelius 1 and moves up, but is just out of range of the Demo Core. Angelius 1 then moves over and engages the Kazny, killing one, moving with Ranvenous, and killing the Underboss. Forsaken 1 moves over and grabs the fury off Angelius 1. The Raptors double shot at the Uhlans doing a whole point of damage, and then retreat a couple of inches. Seraph 2 moves up, kills two Demo Core, and wounds two others thanks to Glory of Everblight. The Demo Core leader is then killed by a shot from Angelius 2. Harrier 2 moves up as a sacrifice to engage the Man o' War. This provokes a counter charge from the Wardog who goes chrarging through the Man o' War thanks to Irusk, but fortunately misses the attack. The Swamp Gobbers move up and put the smoke cloud on Serpah 2, and I forget to move Harrier 1 entirely.
Turn 3
Khador 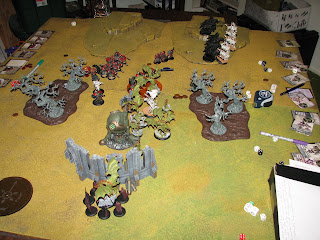 The Demo Core advance and kill Harrier 2. Irusk and Wardog advance and Irusk puts Battlelust on the Man' o War. He then makes a boosted shot at Forsaken 2 but misses. The Man 'o War charge Seraph 2 but are forced to Combined Melee Attack due to the Swamp Cloud. The first hit does 12 points of damage, but I get lucky and the second CMA misses, leaving the Serpah without his Mind. The Iron Fnags move over to screen Irusk and Shield Wall. The Uhlans run to engage the Raptors while the Great Bears run after them up the field. The Kazny surround Angelius 1 and do 6 points.
Legion 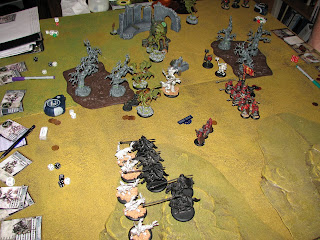 Thagrosh leeches to full and upkeeps nothing. Forsaken 1 moves to the Kazny and Blight Shrouds, killing them all. Seraph 1 moves out of cambat and spends all its fury to kill the Man o' War leader. Thagrosh feats, casts Glory of Everblight, and charges the Man o' War. I remember his second attack and he hammers them all down, but Indy actually starts making his tough rolls. It takes all of Thagrosh's fury to kill two and leave the last one knocked down. Serpah 1 then moves over and vaporises the final knocked down Man o' War. Harrier 1 runs into the far left section and I win on scenario.
Afterward
An interesting game. I played regular Thagrosh alot and it was an nice contrast. Funnily enough I didn't find his epic version to be much better in melee than the regualr version. Regular Thagosh could have done all the killing that epic Thagrosh did this game. The big difference is the wings. Terrain doesn't impede him the same way, but more importantly, neither do other models. Thagrosh is invariably behind something else, and being able to charge through and past your screening models is a big advantage. It makes Hubris more explainable because otherswise I think epic Thagrosh could dismantle armies single handedly by jumping on and destroying different sections.
The signiture spell is definately Glory of Everblight. The only way I can describe it is that it makes you feel lucky. Your rolls tend to come through for you. You aren't getting much better than average, but you hardly ever get the run of bad rolls that can screw you over. Dragon's Blood is also a solid spell. It's essentially a Legion version of Arcane Shield, and that is never a bad thing. Unnatural Aggression I was less impressed with. Now the army I faced didn't have much shooting in it, but it occured to me that even if they had shot my Angelius I wouldn't have dared to advance it since the nearby Khador models would have just torn it into shreds. So in actual play I think this spell is a bit more marginal than it looks on paper. Black Chasm and Flesh Eater both suffer from being a bit too expensive to cast with Glory of Everblight, so I didn't use them this game. Again they seem a bit situational, but more games will tell.
Hubris didn't turn out to be much of a problem, but I kept a Seraph and a Forsaken nearby epic Thagrosh the whole game just in case this came up. I think as long as you keep the initiative it shouldn't be too much of an issue, but a different army with more sacrificial models could be a real pain. I worry about both Skorne and Menoth when it comes to this.
Posted by Defenstrator at 08:36

As a Khador player, I also found that the old Khador University (KU) playbook of "Bashin' things" didn't fare so well this last Call to Arms season.

Props to you both!

Fantastic write up. That is a mean list you played, on looks alone. I give props to both sides. Enjoyed reading this