Cygnar vs Retribution of Scyrah - 35 points.
Myantek and I played a straight caster kill game. I tried out Siege again with a slightly modified list, while she loaded up on jacks to bulk out her army.
Cygnar 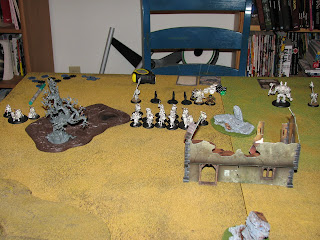 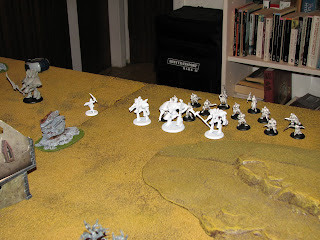 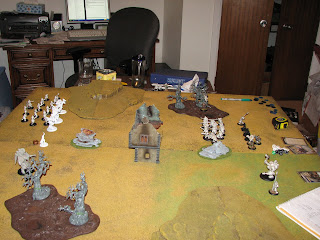 The game was caster kill. On eah side was a small hill, with a forest in opposite corners and rough terrain and a building in the centre. Myantek set up first and put the Phoenix on the left flank with Kaelyssa central and the Chimera, Manticore and Griffon on the right. The Invictors were behind the Griffon while the Arcansit supported the Manticore
I set up with a Stromsmith and the Defender facing off against the Phoenix, Siege/Reinholdt/Squire centre right, and then the Black 13th and other Stormsmith. The Trenchers, Trencher Cannons, and Finn were advance deployed in front of them.
Turn 1
Retribution 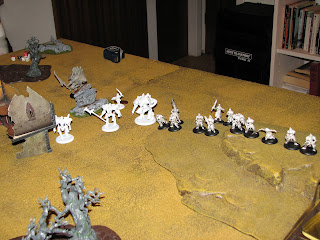 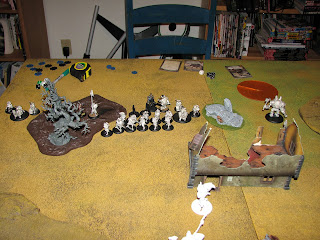 The Defender is assigned 1 focus. Trencher Cannon #2 shoots at the Invictors but is just short and the deviation hits nothing. Trencher Cannon #1 shoots through an opening in the building at the Chimera but also does nothing. The Defender advances but is still shot is still short of the Phoenix. The Trenchers Cautiously Advance while the B13th run up behind them. Bothe the Stormsmiths adavnce forward, with Stormsmith #2 moving inot the forest template. Finn moves in ahead of him. Siege them goes and advances, puts Foxhole on the B13th, and manages to shoot the Chimera, only doing a point of damage. Reinholdt and the Squire move up behind him.

Turn 2
Retribution
The Chimera Apparates around the corner of the building. Kaelysaa upkeeps Phantom Hunter and assigns 2 focus to the Manticore and 1 to the Phoenix. The Phoenix advances and shoots Stormsmith #1. The Invictors begin by using their mini-feat to gain 4" of range. They then advance and kill one of the crew members of Trencher Cannon #2 and 2 Trenchers. The Manticore advances as well and with a bit of luck manages to kill 3 Trenchers with unboosted shots. Kaelyssa arcs an Arcantrik Bolt at the Trenchers through the Chimera in order to try and force a CMD check, but it misses due to them being Dug In. She then feats with the Vanishing, meaning that models in her CTRL area have Stealth and cannot be charged. The Chimera then retreated to safety behind the building while the Griffon advanced to screen the Invictors.
Cygnar 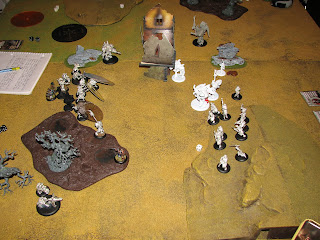 The Defender recieves 2 focus and Siege pulls 1 focus off the Squire. Finn advances and guns down two Invictors which are out of range of Stealth. Trencher Cannon #2 kills another non-Stealthed Invictor. Reinholdt reloads so that Siege can shoot twice this turn. Siege casts Mage Sight and shoots twice at the Manticore. The first shot misses while the second does 8 points to its generator field. The Defender follows up with a boosted shot at the Manticore which destroys its generator. The B13th are trapped behind the Trenchers and can't get close enough to get a shot at the Manticore, so the Trenchers throw Smoke to block LOS. Stormsmith #2 Disrupts the Manticore while Trencher Cannon #1 shoots, but with Stealth the shot misses and the AOE scatters to hit nothing. 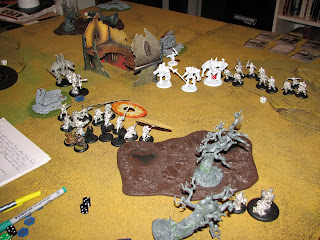 Kaelyssa upkeeps Phantom Hunter and assigns 1 focus to the Phoenix. The Chimera Apparates back around the corner again. The Arcanist advances and fixes 5 points of damage on the Manticore putting the field generator back on line. The Manticore aims, shoots, and kills Stormsmith #2. The rear Invictors move up and then the unit shoots at Finn, who makes three tough rolls but then fails his fourth and dies. The Phoenix runs to engage the Defender but is not engaged himself due to reach. Kaelyssa then arcs Arcantrick Bolt through the Phoenix and makes the Defender Stationary after doing 6 points of damage. The Griffon moves up beside the Chimera.
Cygnar 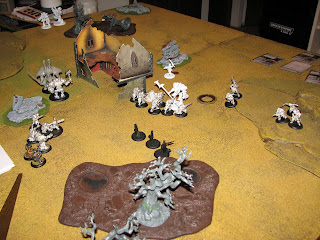 Siege pulls a focus from the Squire and then assigns 3 focus to the Defender, which then spends one to shake off Stationary. Reinholdt lets Siege shoot twice. Siege feats with Breach which halves a targets ARM on its first hit, casts Explosivo on himself, and vaporises the Manticore. The Explosive 3"AOE kills the Arcanist and 1 Invictor. Siege's second shot does 8 points to the Griffon, although 6 points of that are just the generator field. Trencher Cannon #1 shoots the Chimera and does 13 points to it. The Trenchers then Assault the Chimera and Griffon. Their attacks overwhelm the Chimera and scrap it but the Griffon hangs tough behind its ARM 18. The B13th advance and Ryan kills 4 Invictos with her 4" template. The other two B13 manage to pick off the Invictors officer. The Invictors test against CMD for caualties and pass. Trencher Cannon #2 misses the Invictors and its AOE bounces off since they are out of Siege's CTRL area. The Defender pounds on the Phoenix and manages to cripple its open fist. 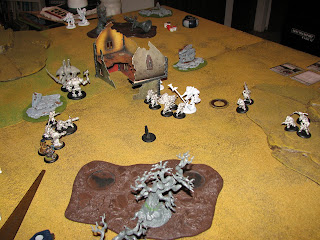 Phoenix is assigned 3 focus and regenerates 6 points of its power field. Kaelyssa moves to the building, gets line of sight through the gap, and Arcantrick Bolts the Defender for 6 more points. The Phoenix hammers the Stationary Defender but doesn't manage to cripple any systems. The Griffon manages to kill the Trencher Sniper. while the Invictors aim and pick off Ryan and Watts.
Cygnar
Siege pulls a focus from the Squire and then assigns 3 focus to the Defender, which then spends 1 focus to shake off Stationary. The Defender keeps pounding on the Phoenix but only manages to cripple its cortex due to the shock hammer. Trencher Cannon #2 manages to kill an Invictor. While Lynch, the remaining B13th member, picks off another Invictor. Trencher Cannon #1 tries to hit Kaelyssa but unsurprisingly misses. Reinholdt lets Siege shoot twice. Siege then Ground Pounders Kaelyssa for 8 points and then shoots into combat to pick of the Phoenix. The Squire stands in front of Siege. The Trenchers all bounce off the Griffon.
Turn 5
Retribution 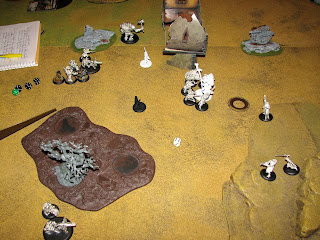 Kaelyssa casts Phantom Hunter on herself and advances into the open. She shoots Siege for 8 points of damage. The Invictors miss the last Black 13th member while the Griffon impales another Trencher.
Cygnar
Siege assigns 3 focus to the Defender. Reinholdt lets him shoot twice. Siege aims but his first shot misses and his second only does 4 damage. Trencher Cannon #1 misses and the AOE hits nothing. The Defender walks over and misses its boosted attack, buys another one and hits with its second boosted attack, killing Kaelyssa.
Afterward
Defenstrator
Well I did alot better than game than I did against Indy, but then again I didn't have to deal with Mage Hunters either. I also kept Siege back more this game which let his shooting come more into play. I have to say that Reinholdt + Siege seems kind of wrong. It's one thing to get even another hand cannon shot. A range 14" POW 14 after Ground Pounder just seems like insult on top of injury. He did a huge amount of damage to Myantek's army by himself.
The Trencher Cannons yet again did almost nothing. The first one got the one good hit on the Chimera while the other killed 2 Invictors. Not a 6 point return in my opinion.
The B13th gutted the Invictors but their DEF 15 wasn't enough to save them from return fire. I had planned to use Trencher smoke to have their Prowl give them Stealth, but the Trenchers were all occupied. In the past I have used Gorman as a dedicated smoke provider and I think I may again in the future.
The Trenchers were alright vs lower ARM but that ARM 18 Griffon proved too much for them. Again they seemed a bit too expensive considering how much they added to the fight.

Too many Myrmidons. It's all I have together for the moment (and still so the next game is more punishment for slacking on building) so I made due. Unfortunately there were too many times were I felt hamstrung by lack of Focus; either on Kaelyssa or on the 'jacks.
The Phoenix is truely an awesome Myrmidon. This was my first opportunity to field it and I don't think it'll be the last. I don't know if it's really the best 'jack for Kaelyssa's force as I've really enjoyed the shooting from the Manticore. I certainly don't need a Chimera and a Phoenix in the same army. So for the 'jack I'm least impressed with is the Griffon. I'm still looking for how to use it.

The Arcanist and the Invictors didn't disappoint but I'm not sure about the Souless Escort. I don't think the Invictors are the best unit to attach him to, especially considering Defenstrator's lack of offensive magic. Once I get the Sentinals built I think the Souless will get more use.

All in all, I think this battle was closer than it looked. The only thing that was really doing damage was Siege. It had turned into a grindhouse and I was slowly being ground down.
Posted by Defenstrator at 11:54