Retribution of Scyrah vs Cygnar – 35 Points 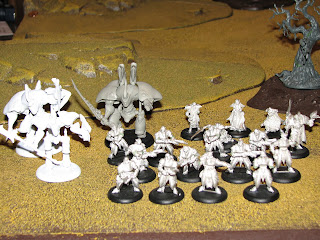 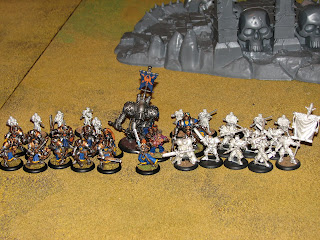 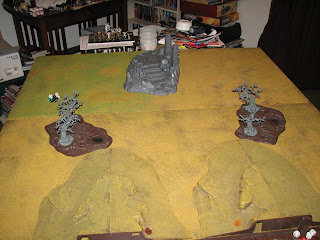 The table had two hills on the left side with a stand of trees beside them. The far right of the table was a large skull hill with a ruin on top of it.


Defenstrator won the roll to go first so he placed the Long Gunners just behind the hill with the Lancer beside them. Stryker and the Centurion were in the middle of the board and the Sword Knights and Storm Blades formed a block on the right of the field with Rupert.


On my side I placed the Invictors below the hill with their jack marshalled Griffon and the Soulless Escort beside them. Vyros took the middle of the table with the Manticore a little behind him and the Phoenix beside him. The Arcanist, Narn and the Magistar were to the right of the deployment zone. 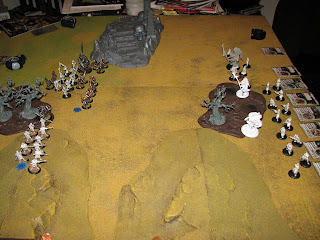 Focus to run forward to the skull hill. The Sword Knights ran forward to surround the Centurion and the Storm Blades followed them. The Long Gunners ran onto the hill and the Lancer ran through the trees. 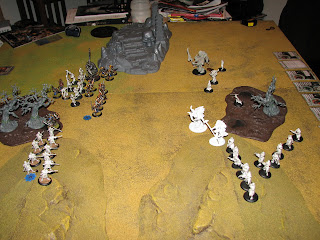 Vyros assigned 2 Focus to both the Manticore and the Phoenix. He then cast Mobility and moved forward.


The Invictors ran to the hill and the Soulless Escort moved into the trees.


Narn moved in front of Vyros, the Arcanist moved behind the Phoenix and the Magistar moved up beside it. The Griffon followed up behind the Manticore. 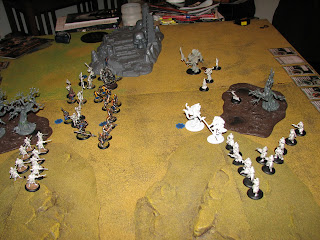 Stryker upkept Snipe and Blur and assigned no focus.


The Long Gunners attaked the Griffon with two Combined Ranged Attacks but only did 11 points to remove its generator.


Stryker cast Arcane Shield on the Centurion and Snipe on himself before moving behind the Sword Knights and shooting the Manticore. He didn’t do any damage to the Myrmidon but he did disrupt it.


The Magistar gestured toward the Centurion and moved it forward 1”. It was a critical hit so the ‘jack was now knocked down. Narn moved toward the Manticore and shot the Sword Knights but missed.


Vyros cast Mobility and then cast Inviolable Resolve on the Invictors. The Arcanist encourage the Phoenix to do +2 DAM and then the Myrmidon walked forward to the Centurion. It did an uninspiring 8 points of damage.


The Invictors tried to shoot the Long Gunners but discovered they were short on the first volley and switched to the Sword Knights where they were able to kill two Knights.


The Griffon simply moved forward. The Manticore moved forward to engage the Sword Knights. Following the example the Phoenix had set, it did no damage. 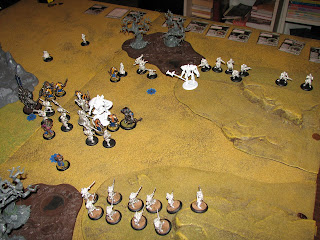 Stryker upkept Arcane Shield and gave 3 Focus to the Centurion. The ‘jack immediately shook off being knocked down.


Stryker chose to use his feat to give his army Invincibility and cast Snipe on the Long Gunners. The Long Gunners shot the Invictors some more and killed 5 of them. 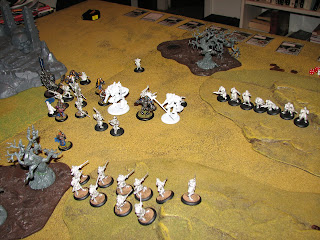 Vyros upkept Inviolable Resolve and chose not to assign Focus.


The Invictors ordered the Griffon to charge the Lancer but it missed. Vyros charged the ‘jack and was able to do enough damage to leave it with 2 points. He then used his feat to give the Manticore Perfect Execution. The Invictors moved forward and the Soulles Escort trailed behind toward the Griffon. Unfortunately they were still too far back to do anything.


Narn charged the Sword Knights and killed one. He then leapt over all Defenstrator’s Cygnar to engage Rupert and a Storm Blade. The Arcanist charged a Sword Knight and killed it with his wrench. The Magistar charged and killed another Storm Blade but missed the second. These three models managed to fill the Manticore with Focus. The Myrmidon used one of those to give itself +3 STR and then killed two Storm Blades and two Sword Knights.


Stryker assigned 3 Focus to the Centurion and dropped all his upkeep spells. He then moved in beside the Storm Blades and cast Earthquake to knock down the Griffon, Manticore, Vyros and the Lancer. The Strom Blades surrounded the group of fallen Retribution and shot Vyros with their POW 14 ranged attacks.


I was utterly unimpressed with my ability to judge distance with my Invictors. I made the mistake of trying to get involved with a shooting war and failed miserably. Once I saw the Long Gunners were going for a hill I should have put my shooting unit on the other side of the table. They probably could have done something to the Sword Knights. I’m not sure about jack marshalling the Griffon to them either. I thought that with Vyros’ small amount of Focus that I could save him some grief by taking the light ‘jack on. Next time I think I’ll leave it in Vyros’ battlegroup.


Vyros, on the other hand, is more of a beat stick than I’m used to. I’m going to have to be careful not to overextend him and leave him defenceless. Narn’s the same. I could get used to those two.


Well that was a pretty straightforward game. I got to shoot stuff up and switch up various upkeeps with Stryker, and finished it with a classic pop and drop. One thing I liked was the straight forward nature of the army. With only one UA and one solo I felt I had a good sized force. With two reach jacks flank even came up a bit, although the damage output of the superior Stormblades overshadowed the Sword Knights. I do have to say that Myantek’s army was one that Stryker is suited to fight. I fought another Retribution force with this army and Mage Hunters tore it apart, since Blur did nothing and their shooting unit had Stealth which I could do nothing about.
Posted by Myantek at 18:28