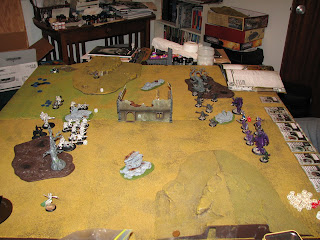 The scenario was No Man's Land. A strip 8" wide goes across the baord. Starting at the beginning of turn 3 if you do not have models in the strip and you opponent does you lose the game.
The battlefield had a rise on each side along with a forest template. In the centre were rock formations and a building which bisected the battlefield. On the far left was Finn (played by Junior), then Siege and his posse of Reinholdt and the Squire behind a Trencher Cannon. On the other side of the building were the Defender and Black 13th, with the Trencher unit and second Cannon in front of them. Eiryss held the far right.
The Retribution had the Mage Hunters opposite Siege with the Manticore centre and behind them. Rahn (Holt) is in the centre with the Sentinels and Phoenix further right. The Arcanist and Magisters are behind the Sentinels.
Turn 1
Cygnar
Siege assigns 1 focus to the Defender. Finn runs to the far left while Eiryss runs to the far right. Siege & Co. advance along with Trencher Cannon #1. Siege casts Mage Sight in front of the Mage Hunters to discourgage them from advancing too far. The Trenchers Cautiously Advance, which lets them move and Dig In, while the Defender runs up behind. I forget to move the Black 13th for some reason.
Retribution 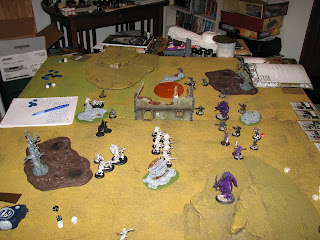 Rahn assigns 1 focus to the Manticore. The Sentinels run. Arcanist advances and gives a focus to the Phoenix. The Phoenix runs. Rahn moves into control range with the Phoenix and casts Chain Blast at Eiryss. It misses due to stealth but the blast catches her. A bad damage roll means that she only takes 2 damage points. Rahn then casts Polarity field on the Sentinels and camps on 1 focus. The Magisters advance as do the Mage Hunters, who then proceed to shoot straight through the building to kill the Sniper and a Trencher.
Turn 2
Cygnar
Siege assigns nothing as it turns out I ran my Defender just out of range. He also grabs a focus from the Squire. Eiryss begins by backing off and shooting a Disruptor Bolt into the Phoenix. Reinholdt gives Siege the ability to shoot twice, and then Siege advances forward to Ground Pounder the Mage Hunters into submission. The dice are against me though, and even when boosting all my attack rolls I only kill 2 Mage Hunters, although one is the Commander. Sieges second shot then proceeds to miss the Manticore. Trying to kill them while he can, and knowing they ignore camped focus, Siege casts Rift at the Mage Hunters. It misses due to Stealth and then manages to perfectly deviate so that the AOE hits no one. Trencher Cannon #1 then shoots at the Mage Hunters but also misses with its AOE. Finn runs forward to help take the heat of Siege. On the other side Trencher Cannon #2 kills a Sentinel. The Trenchers Cautiously Advance and pump CRA death into the Sentinels, killing 5 and doing a wound to the Officer. The Defender aims and shoots the Officer, but a terrible damage roll leaves his target at 1 wound, which means the remaining 3 still have Vengence. The Black 13th advance and Lynch picks off a Mage Hunter with Snipe.
Retribution 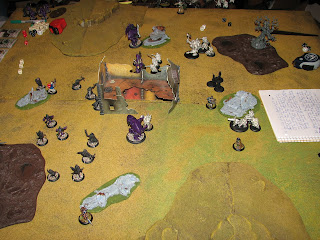 Rahn assigns 3 focus to the Manticore and the remaining Sentinels advance 3" due to Vengence. The Mage Hunters kill two Trenchers, bounce off Siege, and box Finn, but the good Captain makes two Tough rolls and survives. The Phoenix advances and Combusts, incinerating two more Trenchers. The Sentinels follow up and charge, killing two more Trenchers, who fortunately pass their CMD check. The Arcanist puts Concentrated Power on the Manticore, giving it +2 to melee damage rolls. Rahn then uses Arcane Alignment (his feat) and uses Telekinesis to move the Manticore and Magister #2. Magister #1 advances and shoots Siege with a Force Bolt, hitting due to the extended range and boosted attack roll granted by the feat. Siege is not hurt but is dragged 3" towards the Magister. Magister #2 attempts the same but misses. It is still enough. The Manticore, now in range, charges Siege. The first boosted attack knocks him down to one wound, but the second boosted attack misses and the game goes to round three.
Turn 3
Cygnar 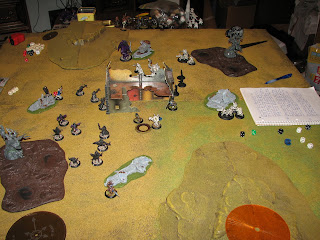 Siege has been dragged out of range of both the Defender and the Squire. All he can do is camp on his focus. Finn stands up and manages to miss the Mage Hunters standing in front of him with his machine gun. Trencher Cannon #1 shoots at the Mage Hunters but again its deviation catches nothing. The Squire advances to provide benefit to Siege again. Siege feats with Breach, meaning that all enemies in his control area are at half armour against the first hit. He then opens a can of whup ass on the Manticore, using all his focus but managing to scrap it. Reinholdt shows uncharacteristic bravery and runs to try and block access to Siege. On the other side of the battlefield Eiryss Disrupts the Phoenix again while the three remaining Trenchers only manage to kill one Sentinel. The Black 13th use Black Penny to pick off the remaining two. Trencher Cannon #2 manages to miss the Phoenix while the aiming Defenders shot goes wide of the Arcanist.
Retribution
Rahn assigns nothing due to disruption on the Phoenix. The Mage Hunters end the game by first doing 11 points of damage to the Defender, and then a single point to Siege.
Afterward
Not to take away from my opponent, but I really didn't play well that game. The idea was to make the Cannons effective by making them effective RAT 9 with Siege. But the Cannon that was +2 RAT was auto missing due to the Stealth on the Mage Hunters. I forgot to move the Black 13th first turn and that hurt as well. They might have been able to finish off the Sentinels or put more of a hurting on the Mage Hunters. Plus running the Defender out of Siege's control area was just careless. That said I'll do a quick run down on the units.
Siege- Kicked ass. I had some bad luck on hitting the Mage Hunters, but he still killed more than anybody else in my army and single handedly destroyed the Manticore. I thought I was safe advancing him and sure enough the Mage Hunters did nothing. I didn't count on suddenly being dragged forward, something I will have to watch out for against Rahn in the future.
Trencher Cannons- Did almost nothing. On the one side it auto-missed and on the other it got one shot off against a decent target before everything was engaged. They didn't die, which is something, but I can't help but feel that their survival had less to do with positioning and more to do with how unthreatening Indy found them.
Finn- Lived which is something, but didn't do a whole lot either. He's pretty easy to kill aside from those tough rolls.
Eiryss- Was solid. She Disrupted the Phoenix and was able to count as being in No Man's Land while circling around to get a money shot on Rhan.
Reinholdt & Squire- were both solid. I have to say that I would dump the Squire before Reinholdt with Siege.
Defender- Didn't do alot, but part of that was because out of three rounds he was only in Sieges control area for the first.
Black 13th- I forgot to move these guys first turn and they still accomplished more than both of my Cannons combined. Hard to argue with that.
Trenchers- The UA was nice becuase it meant that the Trenchers were always Dug In. Unfortunately being Dug In didn't mean much against the Retribution army. The Mage Hunters didn't care, the Sentinels go for melee, and the Phoenix has Combustion. It would be probably better against another army, and it did mean that Rhan wasn't casting Chain Blast at them. I did find that having the UA means you are unlikely to smoke though. If you Cautious Advance then making a regular combat action is all you can do after Digging In, so it felt like I didn't really have smoke at all. The Grenediers were nice and I can recommend them. Not because I used their pathetic AOE, but because they have one and are cheaper than regulr Trenchers. If you want to bulk out a Trencher unit always buys them before paying 11 points for the full 10 Trenchers. Because of them and the UA I was able to have a ten man unit for 12 points that had two AOE attacks, a Sniper, and an Officer, compared to ten ordinary Trenchers for 11 points.
Posted by Defenstrator at 20:54