I've been mainly playing Legion this year, but with my Storm Strider fully painted I wanted to get a game in before I put it back on the shelf. My friend Birch was free so we had a throw down. 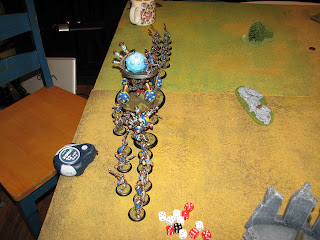 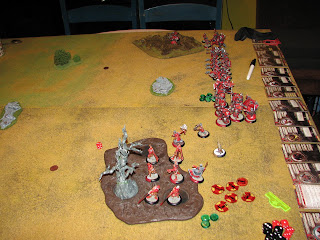 Birch won the role and decided to go second to go second, probably so he could try and score first. I pre-deployed the the Storm Strider front and centre, and then began setting up. On my left I had the Stormguard and then Rowdy behind the Storm Strider. Rhupert Carvolo went behind them. The Journeyman set up behind the Storm Strider with Haley and the Squire to the right side of it. The Thunderhead was placed to her right with Arlan Strangeways behind it. The Stormblades took the right flanks with the Storm Smith behind them.
Birch set up the Drakhun and Assault Kommandos on my left opposite the Stormguard. Epic Vlad and Drago held the centre with the Man O' War beside them and the Ternions behind the Man O' War. The Widowmakers advnce deploy on the left opposite the Stormguard, while the two Manhunters, Saxon Orric, and Doom Reavers advance deploy in the woods on the right. 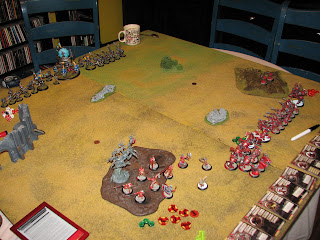 Haley assigns 1 focus to the Thunderhead. Haley activates first and puts Arcane Shield on the Thunderhead, then advances. The Stromguard, Stormblades, Stormstrider, Stormsmith, Thunderhead and Ol'Rowdy (thanks to Aggressive) all run. Arlan Strangewys moves up behind. Rhupert Carvolo moves up behind the Stormguard and plays Heroic Call, giving them Tough and Fearless. The Journeyman advances and puts Arcane Shield on the Storm Strider. 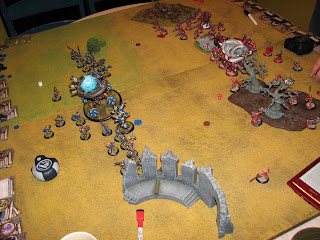 Epic Vlad assigns nothing. The Widowmakers advance into the craters and shoot a Stormguard, who makes his Tough roll and falls down. Vlad casts Hand of Fate, which gives an additional die and then drop the lowest to attack and damage rolls, on the Assault Kommandos. He then casts Transference, a self upkeep that lets warrior models in Vlads control area spend his focus to boost their attack or damage rolls. Vlad then advances. Saxon Orrik advances and uses Reconnaissance on the Doom Reavers. The Assault Kommandos, Man O' War and Doomreavers all run, with the Doom Reavers really spreading out. The Manhunters advance up to the back of the Doom Reaver unit. The Ternions advance and put smoke clouds on the Man O' War while Drago moves up behind them.

Haley upkeeps the Arcane Shield on the Thunderhead while the Journeyman upkeeps the one on the Storm Strider. Haley draws a focus from the Squire. The Stormblades begin the turn by advancing and shooting a Doom Reaver, but it makes its Tough roll. Haley advances a bit, casts Temporal Barrier which gives -2 DEF to models in her control area and prevents them from running or charging. Then she casts Deadeye on the Storm Strider which adds an additional die to its next ranged attack. The Storm Strider advances and shoots a Man O' War teice, killing it and inflicting 2 points of damage on anothers and 3 on a third. Rhupert edges forward and again uses Heroic Call on the Stormguard. The Stormguard run into the left zone with Ol' Rowdy close behind. I'd forgotten to asign the Thunderhead a focus so Araln Strangeways advances to give it one using Power Booster. The Thunderhead runs around the front fo the Storm Strider towards the left zone. The Storm Smith advances to Single Strike a bolt of lightning at a Manhunter, but I roll too high and it doesn't work. 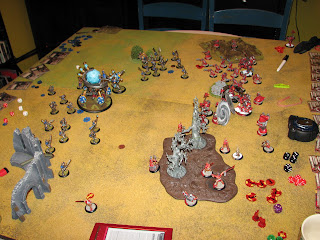 Khador
Epic Vlad up keeps both Hand of Fate and Transference. Saxon edges forward and uses Reconaissance on the Doom Reavers again. The Doom Reavers run, staying spread out, and one engages the Stormblades. The Stormblades soil their armour and fail the Abomination check. The Manhunter that was nearly electrocuted then backs up. The Man O' War can't run anyway due to Temporal Barrier, so they advance and Shield Guard, managing to also kill a Stormguard with a Shield Cannon. The Ternions put Smoke on them and Drago. The Widowmakers then swing into action and aim at the Stormguard, killing two, and knocking two down due to Tough. The Assault Kommandos Assault and Battery, and with Hand of Fate manage to kill three Stormguard and knocking down two more with their shooting. The following charges engage the Stormguard and Ol' Rowdy. They kill the two knocked down Stormguard, and in a burst of luck, the two that had charged into Rowdy each rolled triple six on their charge, doing 14 damage, which was unexpected to say the least. The Drakhun and Drago run forward. 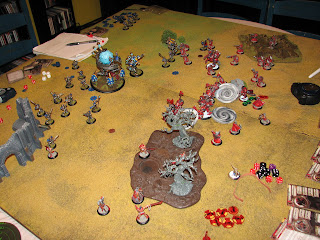 Haley draws a focus from the Squire and upkeeps Arcane Shield on the Thunderhead. The Journeyman does likewise on the Storm Strider. The Storm Smith is the first to activate, using Single Strike to blast the engaging Doom Reaver off the Stormblades.Haley activates next, casting Temporal Barrier, and advancing around the back of the Storm Strider.She then uses her feat Blitz, which lets all friendly faction models that activate in her control area have an additional attack, regardless of ROF.Rhupert advances the opposite way over to the Stormblades. Using Herioc Call on them they rally before activating, meaning they will still be able to act as normal this turn. He is Cygnar's best unit attachment.

The Thunderhead advances towards the Assualt Kommandos and Man O' War, with the Drakhun sitting there frustrated becuase Temporal Barrier was preventing its counter charge. It Pulses and kills 6 Assault Kommandos, and does 9 damage to the Darkhun with that and the follow up attack. The Storm Strider then activates, killing the Drakhun, with bounces killing another 2 Assault Kommandos and a Widowmaker. Rowdy backs up while Arlan Strangeways runs over to be in position to fix it next turn. The remaining Stormguard advance and manage to kill an Assault Kommando, forcing a morale test which they pass. The Journeyman advances but her two boosted damage Handcannon shots bounce off Man O' War. The Stormblades charge/ run, spreading out and killing a Man O' War. 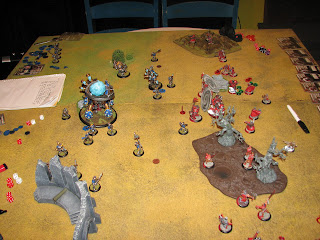 Vlad allocates no focus and upkeep both Hand of Fate and Transference. The Assualt Kommandos advance and Shield Wall, with their sprays and shots killing 2 Stormguard and setting another on fire, and doing a point of damage to the Thunderhead and setting that on fire as well. The Widowmakers aim and put 3 points on the Thunderheads 4 coloumn. Saxon gives the Doom Reavers Reconnaissance again. Vlad shifts over a bit and uses his feat Blood Legacy. This gives 3+d3 friendly faction non character warrior models +3 to their SPD, STR, MAT, RAT, DEF, ARM, and CMD for one round. He rolls a 2 for five models, giving it to three Man O' War two Doom Reavers. He then puts Hand of Fate on the Man O' War.

The Ternions activate next, advacing and each hitting the Thunderhead with an Ice Cage, making it stationary. The Man O' War advance in Shield Wall. Each one auto-hits the Thunderhead, boosting the damage with Transference. Since I'd been playing Legion this year I forgot Rowdy has counter charge and failed to send him in. Between that and Hand of Fate the Thunderhead is reduced to 1 box in movement. With its cortex smashed it won't be able to shake off stationary next turn. In the centre Drago advances while on the other flank the Doom Reavers advance and kill 2 Stormblades, while the Escort advances and kills another with his Frostbite magic spray. 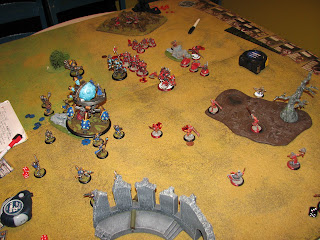 The Thunderhead is stationary and doomed so I don't bother upkeeping Arcane Shield, but Haley does assign two focus to Ol' Rowdy. Haley then drags the last focus from the Squire. Rhupert Carvolo starts the turn by playing Heroic Call once more to make the Stormblades Tough and Fearless again. Haley then activates next, putting Arcane Shield on Ol' Rowdy and casting Temporal Barrier once more, before sliding back towards the right side of the board. The Storm Strider then aims and kills 2 Ternions, who pass their CMD check, and a Doom Reaver. The Storm Smith follow up by killing the Doom Reaver Escort, which also means no more tough rolls for them. The Stormblades then run charge, with one missing a Doom Reaver, while the other puts 8 points on Dragos 5 coloumn. Arlan Strageways advances and tries to fix Rowdy, but fails his Repair roll. Rowdy goes charging in on the Man O' War, but Vlad's feat comes through and it only does 5 points of damage to one Man O' War. 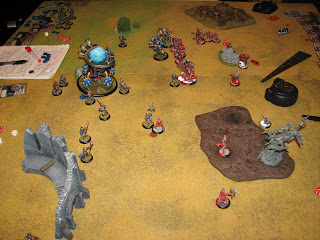 Vlad upkeeps Transference and Hand of Fate for the jack beat down MK. 2. The Widowmakers actiate first, missing the Thunderhead since its one box was in movement, and doing 2 points to a Man O' War in the back. They also put 2 points on Arlan Strageways. The remaining Ternion tries to spray the Stormblade off Drago but misses. Saxon Orrik then shoots a Stormblade, while the Doom Reavers advance and kill another one. The Man O' War again Shield Wall and beat on Ol' Rowdy with boosted damage rolls thanks to Transference, but even with Hand of Fate are unable to cripple any systems thanks to Arcane Shield. Vlad then advances and puts Hand of Fate on the Assault Kommandos, who then activate and between their guns and sprays set Rowdy on fire and destroy the Thunderhead while killing Arlan Strangeways. Drago then kills the annoying Stormblade on him. The turn ends with Birch running a Manhunter into the right zone, thereby taking control of it and getting a point.

This was a pretty fun game for both of us. I was able to counter his melee threat ranage advantage with Temporal Barrier, but he in turn was able to counter that with his feat and Transference. Also, with the two spread out zones Haley was only ever able to cover one side or the other, letting him move in on the unprotected side.

I was a little disappointed in the Thunderhead. I'd gotten too used to playing him with Nemo and putting the 5 focus on it, and was expecting it to blow the Drakhun off his saddle. Having to finish it with the Storm Strider was a bit of a shock. And how I wished that last box was the cortex. With Strageways nearby it could have walked over and blown away the rest of the Assualt Kommandos.
Posted by Defenstrator at 06:59