It's been a while since Myantek and I did a battle report, and we figured we should get back in the swing of things. 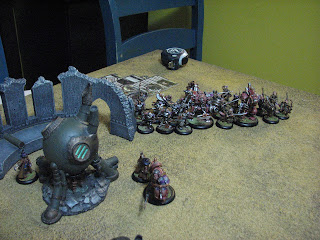 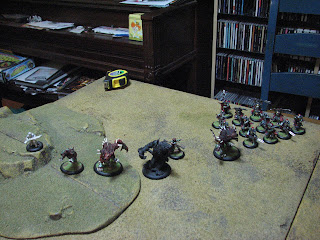 This is a radial scenario and is played from corner to opposite corner. On the centre line between the two deployment areas a 12" circular zone is on one side and a flag is on the other. Starting on the second players second turn, if a player controls the zone and one of his models is touching the flag he scores a point. The first player to score 2 control points wins the game. When a point is scored any models touching the flag suffer a POW 20 magical damage roll, are pushed 3" away from the flag, and are knocked down. 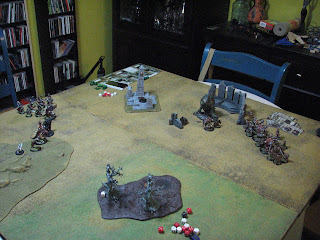 We rolled off and Myantek decided to go second so that she could try to score first. I set up with the Mariner and Mule in the centre. The Nyss were setup centre left so they coiuld go for the trees with the zone, with the Halberdiers centre right so they could cover the centre and flag. It isn't a good idea to get too near the edges of a radial zone because you end up having to move a lot further to get anywhere. Ashlynn stood behind the jacks. When I advance deployed my solos thanks to the Highborn Covenant rules I put Rhupert in the centre beside Ashlynn to cover the units, while Harland Versh, the Bokur, and his client Gorman were put in the ruins.

Myantek put the Argus on my left to cover the forest, with Feral 1 beside it. The Pureblood, Kaya and Feral 2 held the centre, while the Wolves took the right flank to head towards the flag. Alten Ashley advance deployed opposite the woods.

I assigned one focus each to the Mule and Mariner. They then began the turn by running forward to get out of the way. The Nyss then run towards the trees. Ashlynn put Quicken (+2 SPD and +2 DEF vs ranged and magic attacks) on the Steelheads and advanced. Rhupert moved up beside her and played Dirge of Mists (+1 DEF and Terror) on the Steelheads. The Bokur, Gorman, and Harlan Versh all ran into the ruins, followed by the Steelheads who zoom forward to cover the centre. 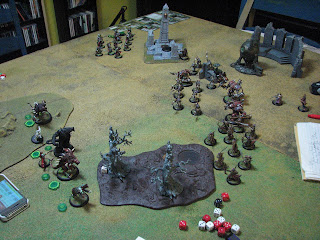 The Wolves of Orboros start the turn by running towards the flag. The Argus riled for a fury point and then ran towards the forest, with Feral 1 warping for +2 ARM and doing the exact same thing. The Pureblood warped for Spellward (can't be targeted by spells) and ran up to join them, followed by Feral 2 who also warped for +2 ARM. Kaya then activated, advanced, and cast Spirit Fang at a Steelhead but is just short. She then cast Spirit Door to teleport over to Feral 1. Myantek, realising she has accidently given herself too much fury she burned the last one on Kaya. Alten Ashley then activated, shooting at and missing a Steelhead thanks to their current DEF of 16 vs shooting. 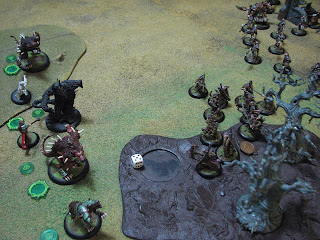 I saw an opportunity and decide to go for it. Kaya has teleported back, but there is a gap between Feral 1 and the Pureblood.  I upkept Quicken on the Halberdiers and gave two focus to the Mariner. Ashlynn advanced and used her feat Roulette. Now for a turn all attack roles in her CTRL area roll an extra 2 dice and then discard 2 dice, and I get to decide which ones are discarded. Ashlynn then puts Admonition (if an enemy model ends its movement within 6", the target model can make an advance while ignoring free strikes) on the Mule. The Nyss Hunters then advanced through the woods, and thanks to Hunter (ignore forests for LOS ) and positioning, most of the Nyss are able to see Kaya. Two combined ranged attacks later and she's dead.

Well that was rather abrupt. To be honest we thought of doing the re-match then and there, but we had already started pretty late. I was lucky the Nyss Hunters were able to pull it off, because in my eagerness to set them up I'd blocked LOS to Kaya for the Mariner, which was the model I was actually expecting to do the job. I thought Myantek would put Occultation (grants Stealth) on the Wolves while she blitzed with the heavy beasts, but she didn't use Occultation, and didn't form enough of a pocket with her heavies to hide in. I was expecting to have to whittle her heavies down before my jacks went in, which is risky with her ability to have the heavies charge in and then be teleported back. So when I had a chance to go for the heart I took it.

Oops!  I thought I had blocked LOS to Kaya with the Pureblood, but there was just enough space to be picked off.  I've had a lot of bad luck regarding Frenzy checks lately so I really didn't want to have to leave any Fury on any beast.

It sort of disappointing because I felt I was on the right track.  I don't think the radial scenarios are ones that this army can win on scenario.  My best bet is to try to keep my opponent from sccoring points until I can get the assassination.
Posted by Defenstrator at 23:20