Thorn is an effective, if expensive, arc node. I feel that regular Lancers are overpriced and really only worth 5 points, so why shell out 8 points for Thorn? There are a few of reasons.

First it has a higher MAT and POW than a regular Lancer, and so it can be used more effectively offensively. This especially combines well with the second reason, its ability to move an additional 3" once per turn after it channels a spell. These combine together to let the jack be a decent assassin with a few casters. Epic Stryker, for example, can cast Polarity Field through Thorn onto itself, making it effectively MAT 9 POW 15 with 14" of threat range. And thanks to the out of activation move, it doesn't have to take that 14" in a straight line.

Lastly, all three Haleys like to take an Arc Node, and its affinity with them allows it to channel while engaged, which deals with an arc nodes biggest weakness. It also has a funny Imprint called Disengage which allows it to move away from things that miss it, but I find I don't use it too often as it costs a focus, and opponents going after Thorn usually make sure they're going to hit.

I converted this model a bit. The spear came bent and eventually broke, so I replaced the front shaft with brass rod. This gave it a similar look to my Centurion, so I also added a power cord to the spear made out of guitar wire to tie the two together even more. It already had a Cygnus on it and its shield, so I added the quartered pattern I have on a number of other models in the army. 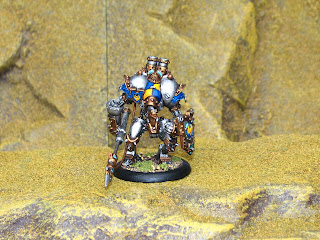 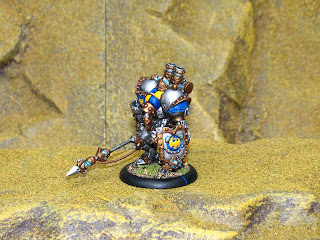 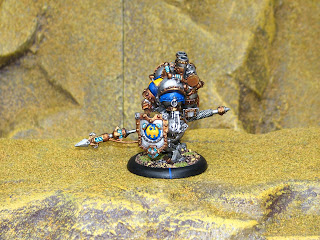 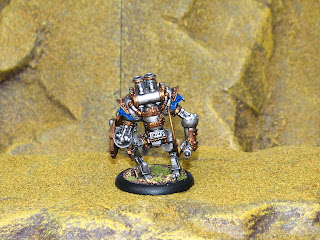 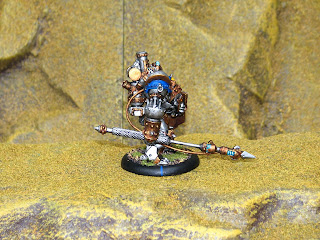 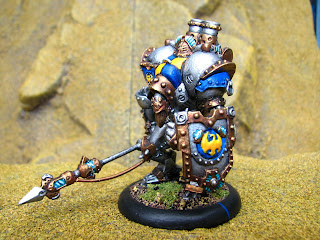