It's been a while since the last update. But Warmachine and Hordes MkIII has arrived and we have been enjoying it. Myantek and I decided to play the armies that we had not been using as much, so she bought the Retribution Battlebox and I bought a Rover, which gave us each the core units of the Journeyman League. We play big games on Friday with our friends and on Sunday evenings will be doing our own Journeyman games. 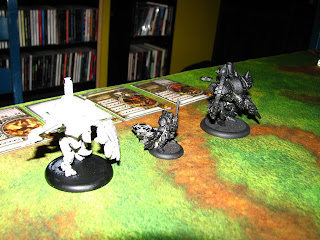 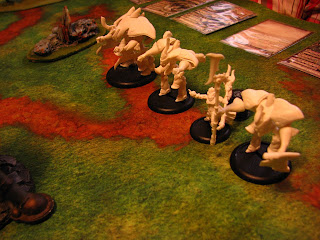 The scenario was simple, kill the enemy caster.

I won the roll to go first and Myantek picked the side. With just the warcaster and two jacks deployment was straightforward. I placed centrally with an eye for cover as I advanced. Myantek did the same opposite me. 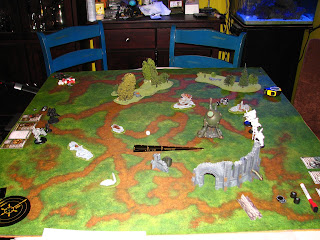 Magnus put Snipe (+4 Rng on target model) on the Rover, Blur (+3 Defense against range and magic attacks) on himself, and Death Ward (+2 ARM and pick hit locations) on the Mangler. He then charged the Griffon and moved 8 inches before his turned ended with the failed charge. The Mangler and Rover both ran.

The Griffon used its Fleet ability to gain +2 movement and advanced 8 inches. The Chimera Apparated (place this model anywhere completely within 2 inches) and advanced. The Chimera advanced and placed a wall template. Helynna advanced and cast Deceleration (+2 ARM vs Ranged and Magic attacks) and Rhythm of War (Warjacks in the battlegroup can advance 3 inches after all models have activated). The jacks then moved forward another 3 inches. 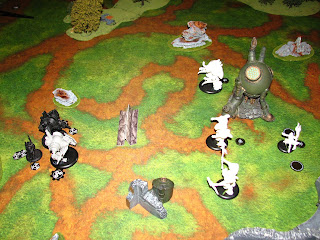 Magnus upkept all the spells on his battlegroup for free thanks to his Resourceful ability, and assigned one focus to the Rover. The Rover advanced and shot at Helynna, but missed even though it boosted to hit. Magnus then advanced and put Blur on the Rover, and the Mangler ran to block line of sight to Magnus.

Helynna spent one focus to upkeep Rhythm of War and assigned one focus to the Manticore. The Manticore advanced and shot. Myantek rolled two for the number of shots on its d3. It hit the Mangler with the first shot but the boosted damage still bounced thanks to Death Ward. The second shot missed. The Chimera Apparated forward. Helynna cast Obliteration ( Cost 4, Rng 10, AOE 5, POW 15) through it at the Rover, hit, boosted damage and did five damage to the one column. Magnus spent a focus to prevent the damage from the AOE. The Warjacks then repositioned 3 inches. 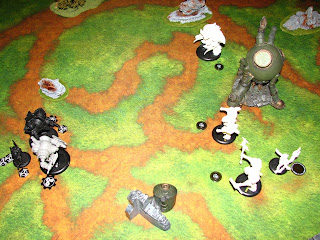 Magnus upkept for free due to Resourceful, and assigned one focus to the Rover. The Rover advanced and shot the Griffon, doing 2 points of damage. Magnus then used his Feat, Hit and Run (Models in battlegroup gain Parry. After all models have activated all the models in his battlegroup can run for free.) and charged, ending his activation.. The Mangler also ran. During the feat move the Mangler and Rover ran to engage Helynna, while Magnus ran past to safety. 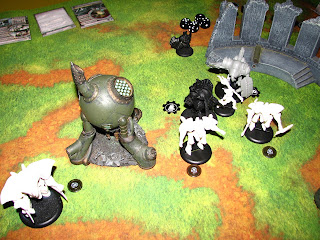 Helynna upkept nothing and assigned one focus to both the Chimera and Griffon. The Chimera Apparated behind the Mangler. The Griffon smashed the Mangler with a roll of 6,5,5, for 8 points, then bounced off with the shield. Helynna struck the Mangler twice, pushing it five inches away with her due to her staffs Force Grip (Instead of causing damage, an enemy model hit by this attack can be pushed up to 3" in any direction.). The Chimera then charged Magnus and hit with its combo strike. Magnus spent a focus to reduce the damage but still took 7 points. The Manticore advanced, spent a focus to gain +3 Strength, and did 8 damage to the Mangler. 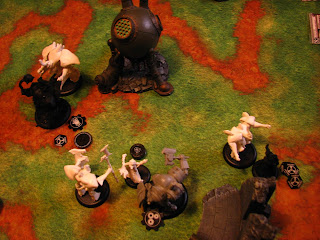 Magnus upkept for free again and assigned two focus to both the Mangler and the Rover. Magnus attacked the Chimer and missed, then cast Iron Aggression (Target warjack may run, charge, or slam for free. Melee attack rolls on the warjack are boosted.) the Mangler. The Mangler then advanced toward Helynna taking 5 damage from a free strike from the Chimera. It then used its Thresher special attack, striking the Griffon for 10 points of damage. Boosting the attack on Helynna it did 5 points of damage, then bought and boosted to hit another attack for 6 more, with Helynna spending focus to reduce both those hits.

The Rover then moved in, and finished Helynna off. 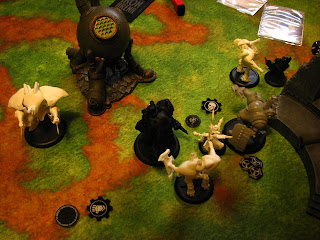 Well that was interesting. I felt I had to get in on Myantek right away as she was going to just out shoot me or yank a jack in with Helynna's staff and tear me apart piecemeal. So I popped my feat and rushed her. Was it the right move? I got away with it, but I think that was more because of Myantek's inexperience with playing Helynna rather than any tactical brilliance on my part.

I'm not used to assigning focus.  Too many games with Hordes where I can do things on the fly.  Also, Kaya can get herself out of trouble much easier than Helynna can.  I made a lot of mistakes.  Mostly due to inexperience with the models (for instance, Apparate is supposed to happen in the maintenance phase, oops).

Helynna is certainly an interesting caster.  I can see possibilities but balancing 'jacks and spells is going to be the tricky part. 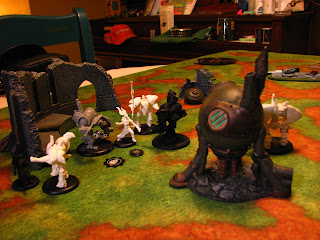