We had a Hordes/Warmachine Christmas this year. Both of socks were full of pewter goodness. Not alot of it is put together quite yet so we haven't been able to try out that much stuff from Evolution but we decided to face each other with untested warlocks. Just staight up assassination but neither of us had used either Rhyas or Kromac so we wanted to keep it simple.

The table was pretty even with a large hill on each short end of the table and a stand of trees in each half on the right hand side. Opposite the tree Defenstrator placed a large flat hill that had limited access points. 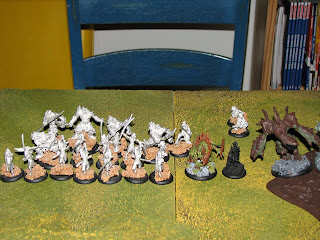 Legion won the die roll and chose to set up and go first. The Teraph was chosen as the centre model and everything deployed around it. The Warmongers were to the left with the Swordsmen clustered in front of them. The Forsaken and Rhyas set up nearly behind it and the Carnivean placed itself in the trees to the right. Bringing up the rear wither the Swmp Gobbers being very careful to stay far enough away from all the fearful abominations.

With Circle I decided to stay on the troop side to try to avoid the Carnivean as long as possible. The two Warpwolves were placed side by side near the entrance of the valley with the Ravagers to their right. Kromac chose to start the battle in human form and was behind the Warpwolves. With advance deploy the Woldwatcher and Lord of the Feast were tucked into the lee of the hill. 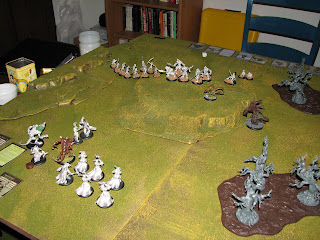 Rhyas started the game by casting Rapport on the Teraph and then Dash to cover everyone. She acrobatically leaped over everything in front of her to land at the base of the large central hill.

Taking advantage of Dash the Swordsmen and the Warmongers ran. The Swordsmen moved to fill the valley while the Warmongers established the Legion on the central hill. The Teraph ran to the central hill and the Forsaken moved next to Rhyas and drew off the Teraph's Fury. The Carnivean was riled and then ran from the trees to beside the hill. The Swamp Gobbers moved close (but not too close) to Rhyas and the Forsaken.

Kromac moved in behind Warpwolf 2 and cast Howling Pit at the Sworsmen. It was short and deviated uselessly toward the central hill. He then cast Brutality on the Lord of the Feast. 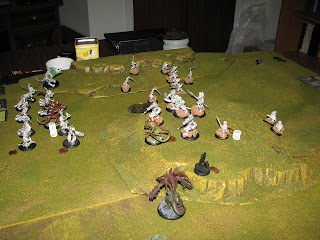 Rhyas leached from the Carnivean and chose to upkeep Rapport. She cast Dash again and moved to join the Teraph.

The Teraph moved to the front of the hill and shot at the Lord of the Feast, boosting both its hit and damage rolls, for 6 points. The blast also caught the Woldwarden and Warpwolf 2 but did nothing to them.

The Carnivean continued its move around the hill and the Forsaken ran to join it. The Warmongers ran to the front of the Ravagers but were only able to engage 2 of them. The Swamp Gobbers moved up and Concealed the Warmongers as the Swordsmen continued to move down the valley.

Kromac leached to his full Fury and chose to upkeep Brutality. He moved away from the valley and towards the central hill then cast Howling Pit at the Teraph. It missed with the deviation moving into an open space for the second time.

The Woldwarden moved and attempted to shoot the Teraph but missed as well. 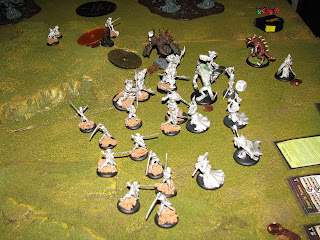 Rhyas started the turn by reaving from the Teraph, upkeeping Rapport and casting Dash and Mind Ripper. She attacked Warpwolf 1 and while her attack bounced she managed 2 points with the spell.

The Carnivean assaulted Warpfolf 1 but its spray missed. It did do 3 points of damage to the Ravager standing behind the beast and then cast Spiny Growth in anticipation of the coming payback. The Teraph moved up beside the Carnivean, shot the Woldwatcher and boosted damage to destroy its Mind aspect, then gave itself the Counterblast animus.

Kromac reaved up to his full Fury and chose not to upkeep anything.. 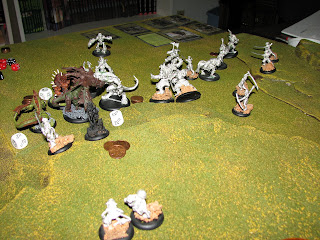 The Lord of the Feast charged a Warmonger, got 2 attacks with Wurmblade and managed to turn his target into Carrion. The Woldwatcher had lost its Mind so simply pulled back as it was nothing more than a Vigilance battery. Warpwolf 2 charged the Carnivean causing the Teraph's Counterblast to engage. Its poisoned tail lashed forward but missed its target. The Warpwolf savaged the Carnivean but was unable to finish the job when it missed with it's Chain Ripper attack. Spiny Growth inflicted decent damage in return.

Kromac charged the Warmonger but used the reach of Dusk and Dawn to avoid getting in the way of anything that might want to get through the space he was hopefully about to leave. He did kill the Warmonger, using all of his current Fury to do so and then used his Dominance to steal the Fury off the Legion beasts. He cast Brutality on the Ravagers and used Vigilance on Warpwolf 1.

The Ravagers then charged into the Swordsmen and killed 5 of them, while also not killing any of their fellow Ravagers. Warpwolf 1 walked up the to Carnivean and almost, but not quite, kills him. He also takes a bunch of damage from the spiney Carnivean.

Rhyas is forced to cut herself for 5 Fury. She doesn't use it to upkeep any spell.

The Forsaken moved behind Warpwolf 1, however, the beast's Vigilance allows it to activate and it casually moves over and kills the Forsaken.

Rhyas takes stock of the situation, leaps over the Carnivean and the Warpwolves to charge Kromac. Before attacking she pops her Feat, Tide of Blood. She boosts and her first hit gets Critical Decapitation and cuts deep for 14 points of damage, transforming him into his beast form. But that's not enough to prevent her from killing him as she boosts and gets another Critical Decapitation with her second blow.

Myantek - So I had one good turn. I was very happy with how I used Kromac's feat. I was able to do lots of stuff that ended up killing several Warmongers and the Forsaken (I hate those guys) and caused Rhyas to damage herself if she wanted to do anything the next turn. Of course, what she wanted to do to me the next turn was kill me so it wasn't a total win situation.

I sort of threw the army together without much thought, every time I was constructing Kromac lists in my head I was using models that I didn't have yet. I didn't think Defenstator wanted to do the Kromac/Rhyas battle the night we did so I was planning to field the Kaya force I've been painting. As it was, I'm pretty happy with the way the army worked. Once I learn how to better use some of the models in it, I rarely field the Woldwatcher or the Lord of the Feast, it'll go a bit better. I think it's a pretty tight little group.

The last turn probably could have turned out a bit better if I'd actually been thinking. That last Fury Kromac was holding probably should have been used to transfer to the Woldwatcher. The 14 points that Rhyas did to him might have been enough to kill the Woldwatcher and give Fury back that I could have used to transform after the next hit. I still think she would have killed him, but it might have made it a bit tougher.

Defenstrator - That was an interesting game. I've been playing mainly Warmachine as of late so it was nice to play the speedy Legion again. As descibed, Rhyas is a bit of a one trick pony but her one trick is really good.

I took the win with it but I'm not sure that things went the way they should have. As pointed out, if Myantek had played her Fury differently Rhyas may not have been able to power all the way through the mound of muscle that is Kromac. Had things been different I might have been better off playing more conservatively and using Rhys to kill off a Warpwolf. With Critical Decapitation and her feat I think most of Myantek's army would have been killed that turn, and with Rhyas Invisible would have been safe from Kromac's counter attack. With most of my army left I could have dealt with him much more safely the following turn. As it was I felt my butt really hangning in the wind. If Rhyas had rolled poorly the next turn would have probably been her doom.

It was also different to play with so many troops. Normaly I run very beast heavy with only one warrior unit. Having two full units on the table made for an interesting experience with Legion, although they felt a bit unsupported. In Warmachine I'm normaly spoiled for buff spells so only having Rhyas's Dash felt a little lacking. I had to remind myself that it is her Feat and own abilities that really make her army flow, but the game ended before I could really see it all in action. I was also reminded that Vigilance is awesome and Counterblast.... isn't. I don't think that's news to anybody though.