Ashlynn vs Kaya on Contested Ground

The Penny Arcade Expo (PAX) is coming and I (Defenstrator) will be going. Myantek, unfortunately, will not. I decided that I was going to keep the pressure off myself to try and win big and instead take the warcaster that firmly staked me into this game, Ahlynn D'Elyse. I had been playing Cygnar before her, but she was the first caster whose back story really captured me. Cygnar is my largest faction and the Legion probably my most played, but my Mercs have the most paint on them so they're going to represent.

This means I need some practice and list tweaking to get back to speed. 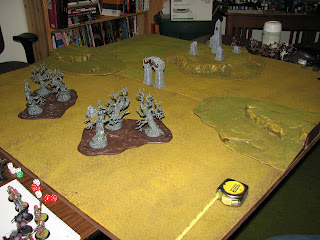 Scenario
The scenario was the Steamroller 4 Contested Ground. The board is divened into four equal sections, north to south acoss the board. Starting on turn two, if you have an entire model/unit in the zone and your opponent does not you get a victory point. First one to 5 VPs or caster kill wins.

Set Up
The board had forests on the left, hills in the 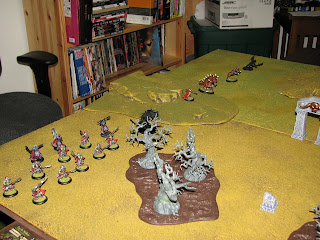 centre of each of the deployment zones with an arch centre table, and a large hill with ruins on the right. Set up from left to right the Cricle forces were the Wolves of Orboros behind the forest, Warpwolf 1, Kaya in the centre, Warpwolf 2, with the Argus and Totem hunter opposite the hill.

Facing them were the Steelheads, Rhupert, Mule, Ashlynn in the centre, and Mariner. 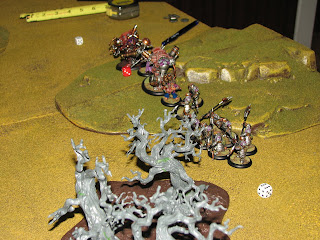 Circle
The turn starts with a Mannikin popping out of the Sentry Stone. Kaya casts Cloak of Mists on Warpwolf 1and Rager on Warpwolf 2 before moving forward. The Argus moves to the base of the hill with the Totem Hunter running parallel to it. Warpwolf 1 riles for 2, takes +2 ARM, and moves to the trees while Warpwolf 2 also takes +2 ARM but runs towards the hill. The Wolves move up to the woods. 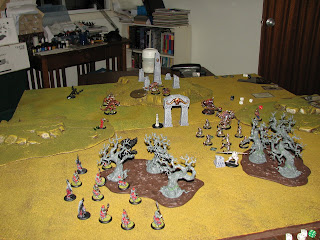 The Mule and Mariner each get one focus. They both run forwards. Rhupert moves up and puts Dirge of Mists (+1 DEF and Terror) on the Steelheads. Ashlynn puts Quicken on the Steelheads, moves up, and shoots the Mannikin, killing it. Gorman moves away from the Totem Hunter and throws smoke on the path up the hill. The Bokur moves in front of him. Gudrun takes coever behind a broken pillar.

Circle
Kaya leeches all and upkeeps both spells. A Mannikin appears beside the Halberdiers. Warpwolf 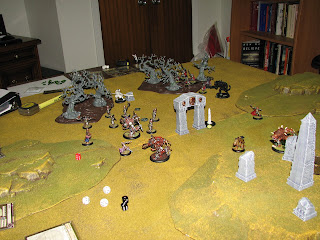 1 takes +2 ARM, moves forward beside the woods, and riles for 2 fury. The Totem Hunter moves onto the hill. The Argus chooses to back away from the path up the hill instead. Kaya moves forward again and launches a Spirit Fang at the Bokur, but bounces of his 17 ARM.

Warpwolf 2 now swings into action and takes his +2 inches of movement. This is enough to let him walk up the hill path, through the smoke, and into melee with the Bokur. A free Rager headbutt power attack knocks the Bokur down and two boosted damage attacks kill him. The Mannikin suicides and sprays at the DEF 14 Steealheads, getting lucky and killing the lead two. Myanteks' turn ends with the Wolves moving into the forest and her receiveing +1 victory point since the Totem Hunter is the only thing in his zone. 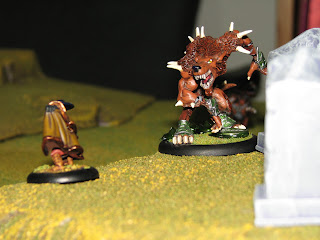 Ashlynn upkeeps Quicken and assigns 1 Focus to the Mule and 2 to the Mariner. Ashlynn then moves forward, uses her feat Roulette, and shoots Kaya who is standing in the open. She hits her but rolls a 5 on 3d6 for damage. Kaya takes the 4 points. Rhupert moves up and Marches the Steelheads for +2 inches movement. The Steelheads charge Warpwolf 1, but thanks to more suck damage rolls only do 7 points of damage to it. They also kill a straggling Wolf of Oboros. Gudrun runs to engage the Wolves of Orboros. The Mule moves forward but finds that he is just short of Kaya, and his shot deviates onto nothing. Gorman takes advantage of Roulette to Black Oil Warpwolf 2 and then rapidly retreats with Bushwhack. The turn ends with the Mariner moving forward to touch Ashlynn and shooting Warpwolf 2 for 10 points. I recieve +1 victory point since Gudrun is entirely in his zone but the Wolves are not. 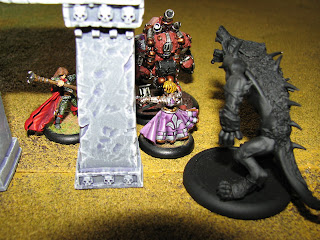 Kaya leeches and upkeeps Rager while a new Mannikin appears. Wolves surround and stab Gudrun, knocking him down with one wound due to his Hangover. The Sentry Stone tries to steal the focus on the Mule but fails. The Mannikin then sprays at Ashlynn, missing her and the Mariner due to Roulette. The Totem Hunter moves up to threaten Gorman.

Now Kaya goes for the kill. She charges Ashlynn, who is still protected by Roulette and can't be knocked down because she is touching the Mariner. Kaya misses her charge, misses, misses (just), misses, and misses. Kaya uses her feat Wild Mastery, refilling herself with focus. She then misses again (go Roulette!) before casting Spirit Door on Warpwolf 1 and camping on one fury. I had thought myself relatively safe between the Mariner and pillar,but Kaya is just close enough to squeeze Warpwolf 1 into Ashlynn's back arc. Warpwolf 1 takes +2 STR and is getting +2 to hit since he began his activation in Ashlynn's rear arc. Even so it starts out promising enough when Warpwolf 1 misses with his first attack, but the second hits and with an evil damage roll (4, 5, 6) kills Ashlynn in one blow.

Hmm. Not too promising a begining. Normally I field Alexia with Ashlynn but I'd been trying out different solos and wanted to see how Gudrun did. I can't complain since he did his job, but having some Risen around to screen Ashlynn would have been nice as well. My biggest mistake was that I got a bit too confident with Ashlynn. Playing Legion I'm always paranoid and looking out for the Kaya assassination run. With it being Ashlynn's feat turn, her having cover from the pillar, and being immune to knockdown due to the Mariner, I thought I was relatively safe. But a Warpwolf starting in your back arc is going to mess up your day no matter what you're doing. I'll be more careful in our rematch for sure.

And that's the way a Kaya assassination run is supposed to work! Aside from the pile of misses. Roulette certainly makes it alot harder to actually get that hit in. I don't know if I would've charged Ashlynn if I'd really realised exactly how much that feat makes things harder to hit.

I'm a little disappointed that I gave Defenstrator the victory point on the Wolves' flank. I just lost track of where they all were and forgot to keep them all on one side of the line. I'm also not quite used to the range that Warmachine armies can sometimes bring to the table. I thought I still had some time before we started to get stuck in. I probably should have held back another turn and pulled in another victory point rather than going for the kill but Defenstrator is usually so careful about limiting places for Kaya to Spirit Door to the caster that if I see it and I think I have a chance I should probably take it. Sometimes it pays off.
Posted by Myantek at 20:22