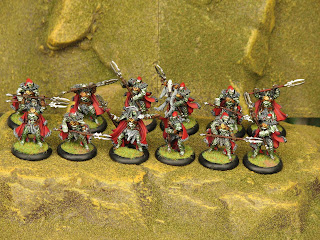 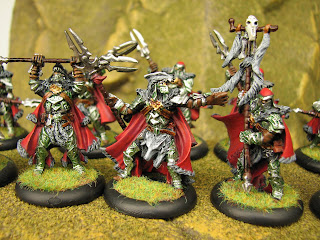 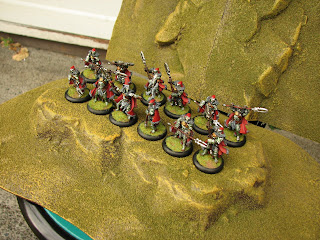 They're done! It only took me... Um... When did I post Kaya? I guess about a year. Longer than I thought but they look pretty sharp as a group. The unit attachment arrived in the middle of me painting the unit so I decided I might as well just go ahead and paint the two of them as well.

The hardest part of painting these guys is that they look terrible until they're done. While I was painting the first group (I painted in groups of three to make the unit look less intimidating) Defenstrator came in to have a look at my progress and was fishing for something to say that didn't discourage me from continuing yet conveyed that they really didn't look that hot. He was quite surprised when I showed him the first completed Wolf.

I had planned to give them a white trim on the cloaks but since I had decided to go with the red so that they matched Kaya they looked a little bit like Santa Claus. Dulling the pelts down to grey helped that little problem. Of course, now I'm not sure how to paint the Pureblood Warpwolf because I'm not sure I want the Wolves to be wearing pelts that are close to the colour of the Pureblood.

Up next is painting the second Warpwolf for the army that Defenstrator converted for me.
Posted by Myantek at 12:34

Nice models, and a really good gaming blog here. One of the best on the web, I dare say.