Shadow of the Valley

No Quarter No. 23 had some special scenarios based on recent battles in the Iron Kingdoms. Shadow of the Valley represents the battle between the Legion of Everblight and the Circle Orboros that's presented in Metamorphosis. So, of course, we had to try it.

Morvahna the Autumnblade has pursued the Legion forces from the Castle of the Keys, through eastern Llael, and to the borders of Rhul and Ios. The army has been extended beyond their reserves and reinforcements, leaving the slower elements behind. The Nyss and thier dragonspawn have been caught in a valley and Morvahna beleives that she can deal the Legion a fatal blow.

What she doesn't know is that the valley has been chosen as a rendezvous point for the Legion. Reserves, led by Absylonia, are fresh dragonspawn and the newly transformed Thagrosh the Messiah. She attacks and hundreds of drawnspawn swarm from the mountains, inflicting horrible causualties to the Circle army. Only the timely intervention of Kaya the Moonhunter allows Morvahna to escape.


The Circle army is 750 points and all Circle models gain the Advance Deployment ability to represent the army close on the heels of the Legion.


The Legion player begins with only 500 points, but beginning on round 3, the Legion player can put an additional 150 points of Legion warbeasts into play at the start of the Maintenance phase. The warbeasts start in contact with the rear edge of the Legion player's deployment zone. They may activate the turn they are put in play.


The table should be moderately to heavily covered with terrain features consisting of only forests, hills and rocky ground.


Warbeasts: Any except for elemental constructs.


Units: Any except Shifting Stones and elemental constructs.


Solos: Any except for Senty Stones


Beginning: The Legion player deploys first and takes the first turn. Players deploy their forces 10" from the table edge.


Victory Conditions: The player with the last warlock standing wins. 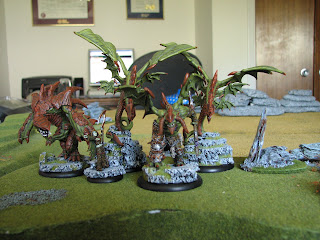 Kaya the Moonhunter and Laris 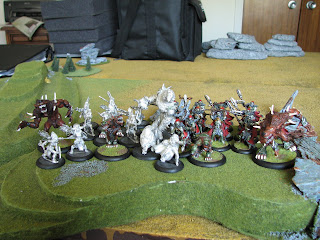 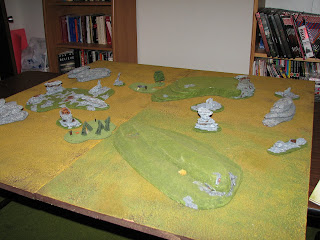 As suggested by the scenario, the table top was fairly dense with terrain. Down both short sides were three clumps of rocks representing difficult terrain with more rocks littering the centre of the board. Two hills stood opposite one another near the centre of the board with small copses of trees at their points.

In a line, starting behind the small copse of trees, Defenstrator placed Angelius 2, Thagrosh, Angelius 1, the Carnivean and the Shepherd. 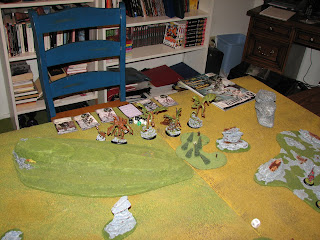 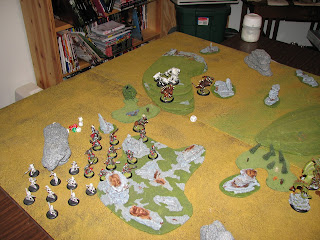 With the advantage of Advanced Deployment the Circle forces were further up the field. Argus 2 and Warwolf 2 were in front of the hill behind a small jutting of rock. Kaya, Laris and the Purblood were sitting on the hill and Warpwolf 1 was on the slope beside them. Argus 1 was in front of the small copse of trees. The Wolves fanned out in the rocky terrain and the Bloodtrackers were beside them.

Thagrosh began by casting Dragon's Blood on the Carnivean, Unnat 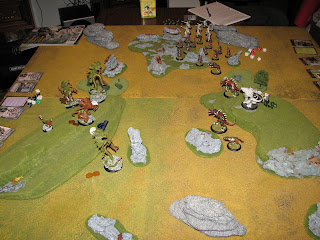 ural Aggression on Angelius 2 and Spiny Growth on himself. He then moved to the top of the hill. 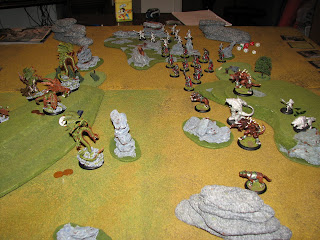 At the beginning of the game the Bloodtrackers chose Thagrosh as their Prey.


Kaya moved along the hill and cast Forced Evolution on the Pureblood. Laris ran in the opposite direction of Kaya.


The Woves ran toward the hill and the Bloodtrackers ran into the rock formation.


Thagrosh leached to full Fury and upkept both Dragon's Blood and 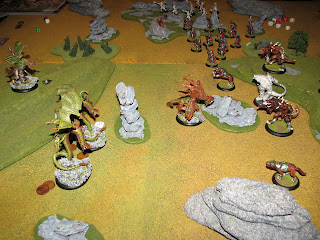 Unnatural Aggression. He then moved behind the Carnivean and cast Glory of Everblight and then Spiny Growth on the Carnivean.


The Carnivean assaulted Warpwolf 1 with a spray attack that did 10 points of damage. Angelius 1 shot the same Warpwolf but did no damage.


The Shepherd moved behind Angelius 1 and Angelius 2 riled and ran to join it. 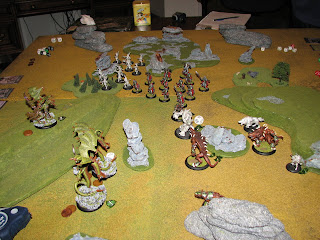 
The Bloodtrackers ran forward through the rocks and were followed by the Woves.


Argus 1 moved forward to the rock and barked to paralyse Angelius 2.


Warpwolf 2 walked down off the hill and Laris moved down behind the rock.


Defenstrator is able to add a Nephelim, Harrier and two Shred 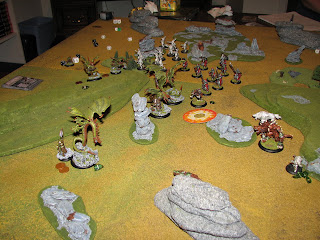 ders to the very back of his deploment zone. Thagrosh leached to full Fury and choose not to upkeep anything.


Shredder 1 walked forward toward the forest and gave itself Tenacity once it reached Thagrosh's command area. Shredder 2 went Rabid and ran forward to engage a Bloodtracker. The Harrier ran up the hill and the Nephelim ran in front of Thagrosh.


Thagrosh cast Glory of Everblight and charged the Pureblood. With reach he was close enough to attack. The first 11 points were transferred to Warpwolf 2, the second attack missed but the third killed the Pureblood in an eruption of ash.


Angelius 2 shot and killed the heavily wounded Warpwolf 1 (Kaya reaved the Fury as he died) and Angelius 2 charged the Wolves. It killed the first and then killed two more by being Ravenous. The Shepherd ran behind Angelius 2. 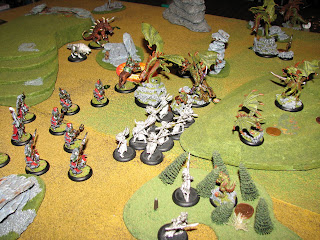 . He passed his threashold check and did not Frenzy.


Argus 2 slamed Thagrosh, boosting to hit. I needed to roll a 12 and I rolled a 13. With a boosted roll to damage the Argus did 4 points and pushed Thagrosh 2 inches back towards the hill. That gave just enough room for the Bloodtrackers to Ambuscade their Prey. They rolled and passed their Leadership test to move toward the Abomination. Then it was the death of a thousand needles as the Bloodtrackers did a lot of little damage. There was one hit for 5 damage that produced a Shredder but that didn't save Thagrosh from being hit by javelins and one hit of 8 points that Defenstrator decided to transfer. Eight of the Bloodtrackers were able to Ambuscade. One was locked in position with the Shredder and one stayed back to maintain unit coherancy.


I initially went into this feeling really constricted. There were only two warlocks I could take and I've never played Morvahna. With epic Kaya I like to take the Woldwyrd and the Sentry Stone but no luck with this scenario. I decided to go wolf heavy with the Pureblood and two Warpwolves and then stick to Argus for the speed. I didn't expect to do more with the Argus than maybe spread out his force a little or stand in the way of something. The Bloodtrackers and Wolves are two big units that could both do damage to epic Thagrosh and cause him some trouble because of Hubris. I knew Defenstrator likes to play beast heavy, and that he'd probably be taking the two Angelius so my plan was to set my heavies on his heavies and then use the troops and Kaya to take down Thagrosh.


That's pretty much what I did. The third turn came faster than I was expecting it to so I wasn't quite in the position that I wanted to be in before I had to worry about the reinforcements. Slamming with the Argus was a bit of a gamble but I figured that if it worked I'd be in a really good position becase Thagrosh would be knocked down and if it didn't work I could still send in Kaya and Laris. I thought about trying to kill the Angelius with the Wolves (I think they could've done it) but I didn't want to give all that Fury to Thagrosh for transferring.


This was the first time I was able to get the Bloodtrackers to Ambuscade on their Prey. It was much more effective than I thought it was going to be. The girls really came through for me. Actually, as a whole I was pretty happy with this army. I could see playing it again. Although, as much as I love Argus, one of them would be dropped for a Woldwyrd.

I thought I was safe, then died. This seems to happen quite often against the Circle Oboros. Tucked in behind the rocks the second Warpwolf couldn't get to me, and the Angelius blocked LOS to the Wolves and Bloodtrackers. The only one who could reach me was Kaya, and she doesn't have the power to beat Thagrosh down in one turn unless there are a bunch of enemies nearby to boost Kaya. What I didn't count on was the Argus. A decent distance away and at -4 to hit on power attacks he seemed a minimal threat, but he caught me on the slam and shoved Thagrosh just far enough to get him right into the open, where pincushion death quickly followed.

In general I was happy with how I played. I armoured up then sacrificed the Carnivean to get the counter attack and kill the Pureblood and Warpwolf 1. My goal was to kill all the heavy hitters while staying away from the troops, and then grind Myantek down under my waves of beasts. Unfortunately my first beast wave didn't accomplish anything. The Bloodtrackers were too far away for me to tie up effectively, and they basicly showed up to become witnesses to Thagrosh's death. I had made sure I had a bunch with one fury on them to chain damage onto, but never took a hit large enough to kill one and reeve new fury. Popping my feat was a possibility, as I could have used the extra movement to tie up more Bloodtrackers, but I was hoping to use it turn 4 where it would be more effective with the first wave of beasts and help get the second wave up the table. Death, of course, precluded that, but hindsight is 20/20 and I thought that was going to make it through to my next turn. I would be curious to try this scenario again with different warlocks, and perhaps we will do so in the future.
Posted by Myantek at 11:48

Thanks for the write up.