Krueger vs Saeryn, Break the Line 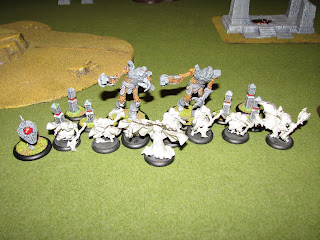 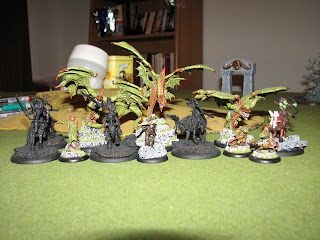 We played Break the Line from the Steamroller 4 rules. Basically it's a control the board scenario. A player wins by controlling 2 zones on his or her side of the table and one zone on the opponent's side.

I won the roll and elected to go first. Krueger got placed close to the centre of the table by some trees. The Woldwyrd settled in slightly behind him with a Woldwardan on the far edge of either side of his control area. The Druids hid behind the hill on the far left of the table and the Waywafer took up a position on the far right. When the advanced deployment phase came the Shifting Stones were placed in front of each of the Woldwardens.

Defenstrator set Saeryn up directly opposite Krueger with the Angelius in front of her. The Swamp Gobbers settled in behind her while both Seraphs were placed by the hill on the left of the board with a Forsaken to follow them. On the far right of the table the unit of Raptors were placed behind the ruins.

Woldwarden 1 moved forward into Shifting Stones 1 and put up Undergrowth with the second Woldwarden doing exactly the same thing on the other side of the board. 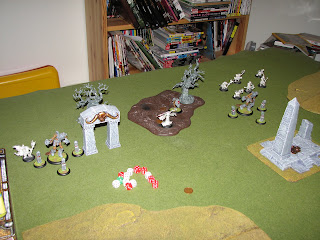 Krueger cast Skyborne and Wind Storm before moving in front of the trees. The Woldwyrd followed him and was riled for 1 Fury.

The Wayfarer moved up beside Woldwarden 2 and the Druids ran to Woldwarden 1.

The Raptors moved forward onto the hill near the mid-line of the board. 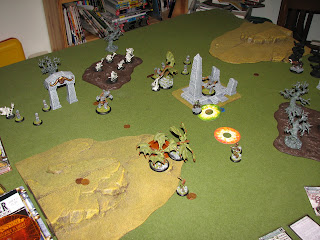 Saeryn cast Respawn on the Angelius and moved forward. The Angelius ran to the ruins.

The Seraphs moved onto the hill and riled for 3 and 2 Fury respectively and the Forsaken moved up to remove the Fury from Serpah 1.

The Swamp Gobbers moved up behind Saeryn and let off a smoke cloud that concealed Saeryn and only touched the Angelius.

So far things were going OK for me. It's pretty much what I expected when battling Defenstrator. I knew I wasn't going to win based on scenario because I couldn't hold a zone on my side from the Raptors so I had to make him hurt this turn. I came up with a plan, started to put it into effect and then screwed up. I finished my turn looked at the table and thought, "Guess this will be a short battle report." Anyway...

The Woldwyrd moved up beside Woldwarden 1 and cast Arkane Killer on it. Krueger cast Skyborne and moved in front of the Woldwyrd and cast Lightning Tendrils on Woldwarden 1. He then cast Windstorm again and let loose his feat. It missed Saeryn, did 2 points to Seraph 2 and 1 point to the Angelius.

The Woldwarden then started pounding on the Angelius. The first blow did 12 points! The second blow... missed. Damn. I was hoping for the chain attack to send the Angelius flying. I guess I might as well kill it. Two more hits and the Angelius went down. Only to Respawn 3 inches away. Staring directly at Krueger and liking its lips.

Serpah 1 frenzied! It attacked its buddy and did 15 points taking out Seraph 2's Spirit and Mind! Defenstrator complained about Krueger's feat. 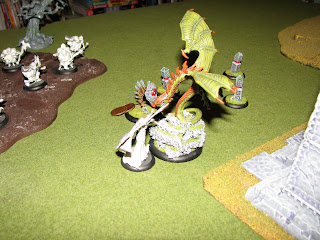 Saeryn moved into the ruins and cast Breath Stealer at Krueger and missed. Defenstrator complained about Krueger's Sky Borne. She then took out her knives and threw them at my warlock doing 2 points of damage.

The Angelius moved in on Krueger and boosted its hit roll. It hits, boosts damage, and Krueger dies. In one blow. Even if Saeryn hadn't hit him. Defenstrator said it had an equal chance of missing. I'm not so sure on that.

So there are a bunch of things I could have done that I only realised once I finished my turn and shook my head in shame. Placing storm templates in the Angelius' way so it wouldn't be so easy to get to Krueger. Making the other Woldwarden go second and trying to Chain Lightning the Respawned Angelius. I only had to do three points. I might have at least forced Saeyrn to spend some Fury to heal it. I could have moved the Stones and had the Woldwarden trample over to block Krueger. I could've listened to Defenstrator explain Respawn and realise that when I killed the Angelius it was going to come back, away from the Woldwarden and be able to do something.

I still had another turn before Defenstrator was going to be able to win by scenario. I could've made better use of it.

To be fair, I really did only have an even chance of hitting Krueger. With Sky Borne he is effectively DEF 17, so the Angelius needed an eleven on 3d6. To be honest I was on pins and needles that last turn. One Seraph was useless, the other half dead, meaning Saeryn and Angelius were the only things that could get him. When Saeryn flubbed Breathstealer and damage roll for the knives I thought the game was up. Luckily for me the dice broke my way and Kruger ended up impaled. If I had rolled a ten or less it would have been Saeryn's turn to be standing in the open waiting for death. So I felt this one was tighter than it looked.
Posted by Myantek at 21:01