Fight for the Stones: The Rematch

We decided after our last game that a rematch was in order. We both felt that we had learned some things in order to better defeat the other and wanted to test them out.

Strength of Stone - Scenario from No Quarter No.6

The armies are predetermined for this scenario.

Special Rules
There are 3 Wardstone markers on the board, each set up 10 inches from the table centre. They form a triangle with the traingle "bottom" being nearest the Legion deployment zone. The Legion deployment zone is a 6" strip along one table edge. Each stone is ARM 20 with 10 Damage Points and treated as a structure. While Circle players are within 2" of a stone they gain +1 to MAT and ARM. Additionaly, if Baldur is destroyed the Circle beasts do not go wild.

Setup
Forests were placed in a circle around the stones with a piece of forest terrain in the centre of the table. No terrain was within 6" of a Wardstone.

Deployment
Myantek deployed her forces at the back stone again. Baldur was in the centre flanked by the Argus, with the Woldwarden and Warpwolf in front. I (Defenstrator) set up with the Carnivean directly opposite the right stone. The Seraph to its left, then Thagrosh in the centre, and finaly the Shredders lined up on the far left opposite the other stone.

Turn 1
Legion- The Seraph activates first and advances forward while Slipstreaming the Carnivean. The Carnivean charges and destroys the right stone with its first bite attack. Thagrosh advances and casts Death Shroud and Draconic Blessing on Shredder No.3. He then discards his remianing fury. Shredder No. 1 activates, is forced to go Rabid, and charge 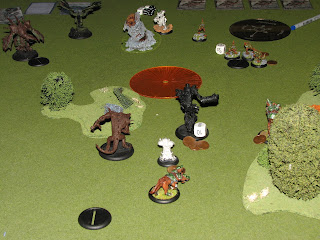 Turn 2
Legion- Thagrosh reaves off the Carniven, the Seraph, Shredder 3 and Shredder 1. Draconic Blessing on Shredder 3 is upkept. Shredder 1 & 2 test for frenzy. Shredder 1 is fine but Shredder 2 fails and attacks Shredder 1, missing because of his lack of mind. The Carnivean again activates first, casting Spiny Growth on upon himself and then charging the Warpwolf. He is short (as was expected) but the spray attack hits.... for no damage to the ARM 18 Warpwolf. Shredder 1 then activates doing a point to the Wardstone, followed by Shredder 3 who manages to finally destroy it. Thagrosh then activates and casts DeathShroud and Slipstream. He moves forward and to the right of the centre trees, Slipstreaming the Seraph, and then casts Tenacity on himself and the Seraph. The Seraph moves forward to just behind the centre trees and shoots the Warpwolf through the trees for a 6 and 3 point hit. Shredder 4 walks over to block the charge lane to Thagrosh. 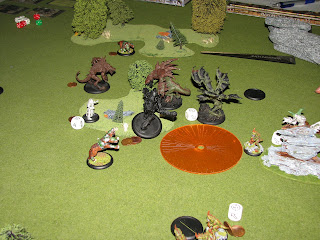 Circle- Baldur reaves all and upkeeps nothing. The Woldwardern moves forward and uses its Undergrowth animus, catching the Seraph in it. It then Earth Spikes the Seraph for 6 points. The Warpwolf pulls back and heals itself for 3 points. Baldur moves toward the centre and casts Stone Skin on himself. He then casts Rapid Growth in front of Shredder 4, blocking Thagrosh from the left side of the table, and heals the Warpwolf for 1 point. Finally he Feats while holding 1 fury. Both the Argus move towards the centre of the table with Argus 1 behind the Woldwarden and Argus 2 behind the Warpwolf.

Turn 3
Legion- Thagrosh reaves from the Carnivean and Seraph. Shredders 1-3 make frenzy checks. Shredder 3 is fine but Shredder 1 frenzies and promptly kills the wounded Shredder 2. The Seraph casts Slipstream and moves the Carnivean over. He then shoots up the Woldwarden, but does limited damage. The Carnivean moves in a circle route but is still able to walk over to the Warpwolf and beat on him. Due to its high DEF the Carnivean is unable to finish it off however. Shredders all move up and spread out. Thagrosh moves up agai 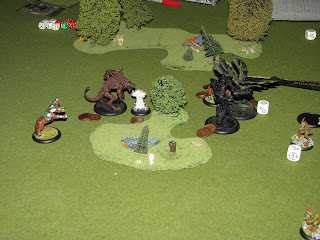 n (damn he's slow) and casts Death Shroud, followed by Tenacity on himself and the Seraph.

Circle- Baldur reaves fully and upkeeps nothing. He starts by charging the Carnivean, getting some solid boosted hits in and lowering its DEF by 3 with his sword. The Warpwolf then activates and kills the Carnivean off. Argus 2 tries to slam the Seraph and misses. The Woldwarden charges the Seraph (for free due to Baldur) but misses due to Tenacity. Its second attack hits and destroys the Seraph's Spirit. Argus 1 moves back behind the centre trees.

Turn 4
Legion- Thagrosh uses the Carniveans death as an opportunity to finally get all that fury off the Shredders. Shredder 4 goes Rabid and charges the Woldwarden for solid damage. Shredder 3 does the same. Thagrosh then charges the Woldwarden and kills it on his second attack. He then casts Death Shroud and sits back with no fury on him. I then prompty forget to feat. Doh! The Seraph backs off from Argus 2 and shoots him up, but destroys no aspects. Shredder 1 moves over to get in the action.

Circle- Baldur reaves but can't get all the fury. Argus 2 then frenzies out and kills the Seraph with its two boosted attacks. Lucky-lucky. Baldur casts Earth Spikes at Shredder 3 but misses. He then moves and casts Stone Skin on the Warpwolf. The Warpwolf then moves in front of Baldur and Riles for 3 fury. Argus 1 moves beside the Warpwolf.

Turn 5
Legion- Thagrosh reaves all and casts Draconic Blessing on himself and charges Argus 2, making sure he is at the max 2" his reach allows. Argus 2 explodes and creates a cloud effect blocking LOS to Thagrosh. Thagrosh then feats and brings back then C 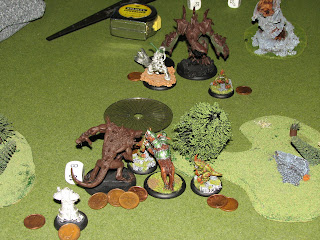 arnivean beside him. I considered the Seraph but discarded the idea pretty quickly since POW 12 shots were not going to do much to that ARM 20 Warpwolf. Shredders 3 & 4 go Rabid and charge Argus 1, badly hurting him but destroying no aspects. Shredder 4 manages to also engage the Warpwolf when doing this. Shredder 1 runs to get back in the action.

Circle- Baldur reaves and upkeeps Stone Skin on the Warpwolf. Argus 1 activates and kills Shredder 3 in one massive bite. The Warpwolf then activates and is the complete opposite, missing with all its attacks against Shredder 4. Baldur casts Earth Spikes at the Carnivean but misses due to the cloud effect. He then moves away to behind the Warpwolf on the right side of the board.

Turn 6
Legion- Things seem to be tipping in Legions favour now. Thagrosh reaves all and upkeeps his Draconic Blessing. Shredder 1 goes Rabid and charges and kills Argus 1. Thagrosh charges to 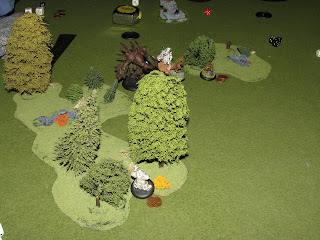 the side of the Warpwolf and catches him with reach, getting a big hit. He then starts missing alot and spends all his fury. Not to worry, the Carnivean can squeeze past since Thagrosh is so far over and charges into the Warpwolf, killing it.

Circle- Baldur is now alone. He casts Earth Spikes and hurts Thagrosh and Shredder 4, knocking them down, but is unable to follow up.

Turn 7
Thagrosh reaves and recieves +1 fury from the Anthanc. He upkeeps Draconic blessing. The Carnivean runs to the last Wardstone. Shredders 1&4 move up. Thagrosh moves and casts Death Shroud.

Turn 8
The Carnivean destroys the Wardstone.

After game thoughts.
Defenstrator- Whew. That was a bloody game. Sure I had the Carnivean at the end, butI'd brought him back. Basicly Myantek killed everything except 2 Shredders and I had returned the favour. Neither of us seemed to be able to get that assassination run in on the enemy warlock though. I thoroughly cursed myself for forgetting my feat that game. I was just lucky that there was no time limit and that Myantek wasn't in the position to capitalise on my mistake. I definetly made better use of Thagrosh that game. He was alot more active getting the finishing blows on the Woldwarden and Argus 2, plus softening up the Stone Skined Warpwolf. On the other hand he had to be since this game Myantek did a much better job at cutting me off from the objective.

Myantek- Bleh. Lost again. And I'm not even sure where I went wrong this game. I was pleased with how I was really able to funnel the Legion force around the table. Denfenstrator had much more difficulty in just walking forward and getting what he wanted. I still need work with Baldur's feat. I had expected that the Warpwolf would be relatively safe where I'd placed him but he still got hit for quite a bit. I guess Baldur should have been even further forward. I was upset with the turn that the Argus killed the Shredder but the Warpwolf completely whiffed.

I'm used to the opposite happening. I'm thinking what it comes down to in this scenario is that Circle is going to take it in the face. If you set up safe at the back then you're going to lose at least one Wardstone in the first turn with the second falling in the second turn. If you set up near the front then Legion can still choose to go all out on a stone or can do serious damage to the army. I'm thinking setting up at the back and really controlling the lanes is still the best way to go. I just need to get a little better at it.
Posted by Defenstrator at 19:48

Warlocks don't reave fury during their control phase, they leech it. Reaving is what is done when a beast dies.