So I'm still putting together my Retribution force and still learning to play Warmachine so we stuck to the simple yet again. Defenstrator is testing out his various warcasters under the new MK II rules as well so it's a learning experience for both of us. 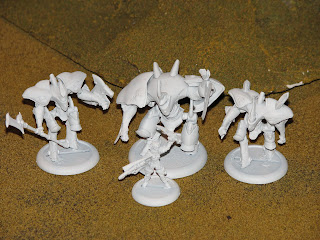 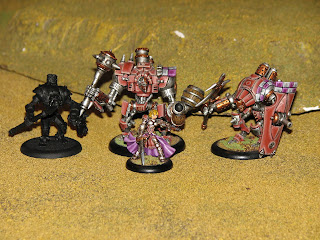 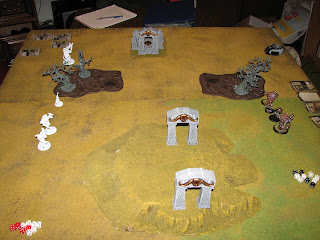 Defenstrator set up the table and left a lot of open space on it. On the near left there was a small ruin with a stand of trees near it. The trees were mirrored on the far side. On the right the was a large hill with a set of ruins on top of it.

The roll to go first was won by Defenstrator but he elected to go second so that left me trying to figure out where to set up. The Manticore was placed on the far left by the trees and Kaelyssa, the Griffon and Chimera were placed on the other side of the trees.


On Defenstrator's side the Vanguard was placed closest to the trees. Ashlynn, the Talon and the Mule all lined up beside it. 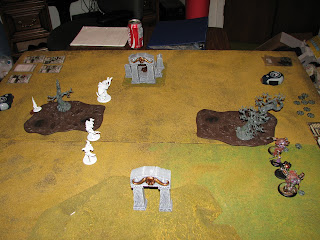 The Chimera Apparated its full 2" forward before Kaelyssa gave one Focus to all her Myrmidons. She then walked into the trees and cast Phantom Hunter on the Manticore. The Mymidons all ran forward to the top of the trees. 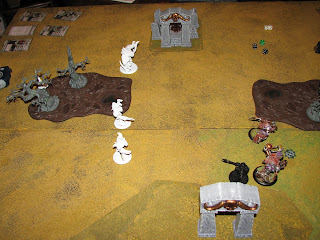 Ashlynn gave one Focus to all her warjacks and then cast Quicken on herself. She moved forward and shot the Chimera for 8 points. The 'jacks all ran forward with the Talon staying behind the Mule and the Vanguard moving in front of Ashlynn. 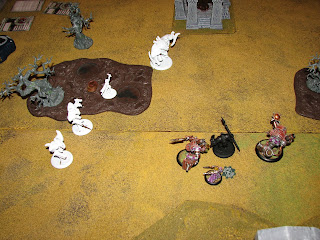 The Chimera once again Apparated its full distance forward. Kaelyssa gave three Focus to the Manticore and then walked through the forest. She cast Rift through the Chimera and did 10 points of damage to the Vanguard. This probably would have been just the right time to use her feat but I forgot.


The Chimera and the Griffin then moved back out of range while the Manticore shot at the Vanguard. Unfortunately its shot fell short.


Ashlynn chose to upkeep Quicken and then gave one Focus to all her 'jacks. 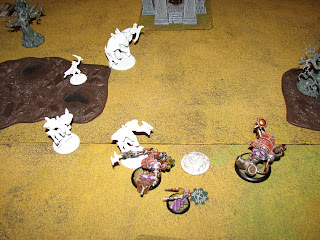 The Chimera Apparated forward and Kaelyssa assigned 3 Focus to the Manticore and 1 to the Griffon. She cast Arcantrik Bolt through the Chimera at the Vanguard to do 2 points of damage and render it stationary.


The Manticore blasted away at the Talon and managed to wreck it in two shots. The Griffon charged the Vanguard for 5 points and the Chimera retreated to the trees. 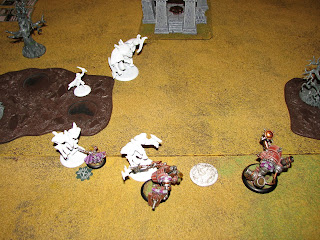 Ashlynn upkept Quicken and then gave 2 Focus to the Vanguard and 2 to the Mule. The Vanguard immediately shook off stationary. She then used her feat Roullette, which forces all models in her control area to add two extra dice to their attack rolls and then drop two chosen by her controler. She then moved around to attack the Chimera leaving the Myrmidon with one point of damage.


The Vanguard attacked the Griffon for 5 points and the Mule shot the Manticore for 9 points of damage.


Kaelyssa assigned 3 Focus to the Manticore and 2 to the Griffon.


The Manticore returned the Mule's fire doing a total of 8 points of damage on two shots. The Griffon flailed uselessly at the Vanguard. The Chimera moved out of combat and was wrecked by Ashlynn on the free strike.


Kaelyssa cast Phantom Hunter on herself and, with the Chimera out of the way, was able to move out of the trees and shoot at Ashlynn. Unfortunately, she missed. She used her feat. 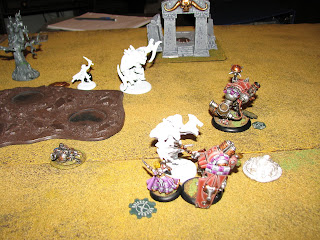 Ashlynn continued to upkeep Quicken. She gave 1 Focus to the Mule and kept the rest for herself.


The Mule moved forward but thanks to the Stealth of The Vanishing couldn't see the Manticore. The Vanguard continued to attack the Griffon, doing another 3 points of damage.


Ashlynn cast Admonition on the Mule and then moved toward the Griffon. She attacked the Myrmidon for a total of 10 points of damage.


Kaelyssa upkept Phantom Hunter and gave 2 Focus to the Manticore. She then moved into the forest and cast Arcantrik Bolt at the Mule. She hit it easily. However, she did not do any damage to make the 'jack stationary.


The Manticore backed up amd shot at the Mule for 2 points of damage on two shots. The Griffon continued to whiff on the Vanguard.


Not exactly my best turn.


Ashlynn continued to upkeep Quicken and chose not to assign Focus.


The Mule shot the Manticore for 13 points of damage, taking off both the Myrmidon's arms. At least one of the heavies knows how to use its cannon. The Vanguard continued in epic battle against the Griffon doing 1 point of damage.


Ashynn knows that the best way to get something done is to do it herself. She moved in on the Griffon and wrecked it. 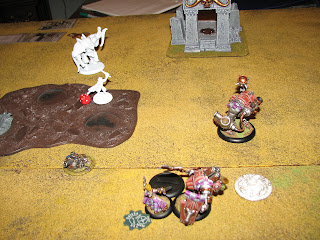 Kaelyssa upkept Phantom Hunter and kept all her Focus for herself.


The Manticore shot the Mule for another point of damage.


Kaelyssa lined up Ashlynn and shot her for a total of 13 points, leaving a single wound on the enemy warcaster. 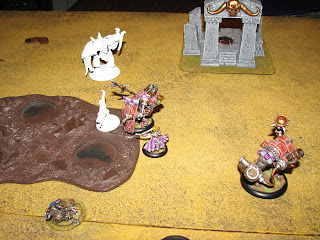 Ashlynn continued to upkeep Quicken, she gave 2 Focus to the Mule and 1 point to the Vanguard. At this point Defenstrator remembered that the Vanguard not only has a shield, but can perform Shield Blocks and probably should have stood in front of Ashlynn for some of Kaelyssa's shots.


The Mule shot Kaelyssa for 15 points, leaving just one wound on the warcaster. Ashlynn moved in front of the trees to shoot at Kaelyssa and missed. As the shock fades the Vanguard simply ran into the trees to engage Kaelyssa.


Kaelyssa dropped the upkeep spell and didn't bother assigning any Focus. Instead she cast Rift on the Vanguard. The spell destroyed both arms and caught Ashlynn in the blast. With enough focus to boost the damage Kaelyssa was able to do 1 point of damage to the warcaster. It wasn't a lot, but it was enough. Kaelyssa was caught in the area of the Rift as well but no damage was done.


OK, I got lucky. I thought I was done for when the Arcantrik Bolt bounced off the Mule. Everything was going OK until that point and then the dice just failed me. On the bright side, Defenstrator's dice failed him to leave Kaelyssa with the one point. His forgetfulness worked in my favour as well. I didn't realise that the Vanguard could stop shots like that. I was hoping to kill her that turn.

So boys and girls, what's the first rule when it comes to winning games? Remembering what your models do. This was the second time I had used the Vanguard in MKII, and I was all excited that I would be able to stop a shooty enemy warcaster from just pegging Ashlynn. So what do I do? Forget about it in the crucial moment. It's especially galling because it wasn't like the Vanguard was the full two inches away or anything. No it was right next to Ashlynn. It could have knocked that shot out of the air with a flick of its wrist. That left me vulnerable enough to be finished by Myantek's long shot at the end, and that was game.

It was all fun though. We had lots of manuevering on both sides and it was interesting to see how things played out. The Manticore continues to impress me as an all around solid warjack. Smashing my Talon at range made me wary of it and it was engaging the Mule in a solid gunfight. Like Myantek I thought the turning point was when her Arcantrik Bolt bounced off, preventing the Manticore from simply coming in and smashing the Admonished Mule. But instead it came down to a messy gun and magic fight in the centre. The Talon on the other hand hasn't been impressing me that much, and I think absorbing the Manticore's fire was about the best role for it.
Posted by Myantek at 19:06