Cygnar vs Retribution of Scyrah - 11 Point Battlebox Battle
Privateer Press has shown off its awesomeness as a game company and released the MKII rules early as a PDF so Warmachine players can get back to playing. We decided to give Myantek's new Retribution force a test. Since Myantek has only ever played Hordes she wanted to ease into Warmachine, so we decieded to start with a classic battlebox battle. While there isn't an actual Retribution starter box Privateer has put up a suggested starter force.
Cygnar 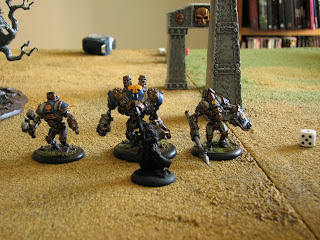 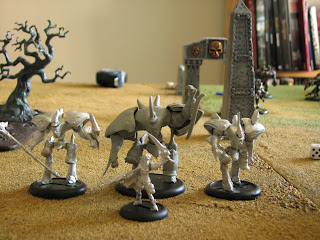 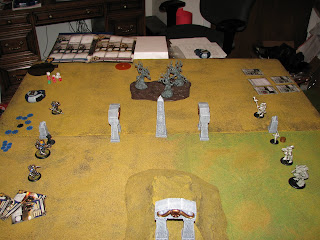 This was a basic caster kill scenario. On the left was a tree template with a hill to the right. Temple ruins provided some cover in the centre.

Turn 1
Cygnar
Stryker puts Arcane Shield on the Ironclad, Snipe on the Charger, and Blur on the Lancer. Everyone walks.
Retribution
Kaelyssa and all of her jacks walk up as well.
Turn 2 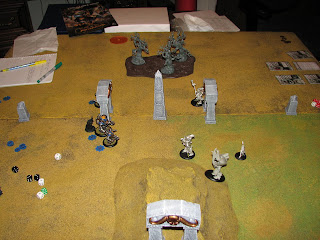 Cygnar
Stryker upkeeps everything, gives the Charger 3 focus. The Charger leads by moving up and shooting the Chimera for 10 points of damage with its first shot, blowing off its force field but not crippling anything. It's second shot missed with triple ones. The rest of the battlegroup moves up some more.
Retribution
The Chimera recieves 1 focus and the Manticore recieves 3. The Manticore leads, moving up and shooting to cripple the Charger's gun. The Chimera regenerates 3 field points and moves up. Kaelyssa then casts Arcantrik Bolt at the Ironclad, but bounces off. She then feats, meaning all of her models have stealth and none of them can be charged.
Turn 3
Cygnar
Stryker upkeeps Blur and Arcane Shield, puts 1 focus on the Ironclad and 3 on the Charger. The Ironclad moves behind the Charger and does a Push power attack, shoving it forward an inch. The Charger then walks up to the Chimera and starts whacking away. Unfortunately it only hits with two of its four attacks, but manages to cripple its right arm. The Lancer moves up and Stryker moves beside the Ironclad before feating, giving all his models +5 ARM.
Retribution 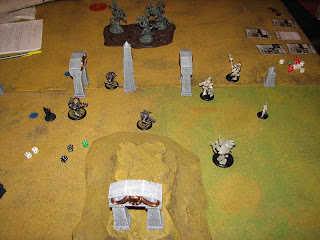 Kaelyssa gives the Manitcore 2 focus and the Chimera 1. The Chimera Apparates out of combat with the Charger, backs up, and regenerates 1 point to its field. The Griffon moves back away from the Lancer. Kaelyssa casts Backlash on the Charger and pulls back as well. The Manticore also pulls back and shoots the Charger, crippling its melee weapon and doing a point of damage to Stryker with Backlash.
Turn 4
Cygnar
Stryker continues to upkeep Blur and Arcane Shield, and gives each jack one focus each. The Charger does the Slam power attack against the Chimera, knocking it back into the Griffon, and knocking them both down. The Griffon takes no damage but the Chimera loses both its Arc Node and Field Generator. Stryker moves up to shoot the Manticore, but finds his pistol is just out of range. The Ironclad and Lancer both run forward.
Retribution 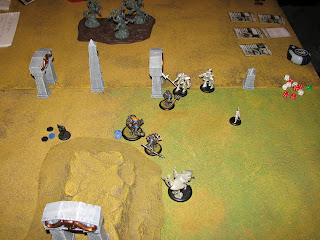 Kaelyssa upkeeps Backlash and gives 2 focus to the Griffon and 3 to the Manticore. The Griffon shakes off the knockdown in the maintanece phase. Kaeylissa then shoots the Charger, doing minimal damage but another damage point to Stryker. The Griffon then moves over and whacks the Charger as well, leaving it with 1 point left on its damage grid and doing another point to Stryker. The Manticore moves to unengage itself with the Lancer but takes only 1 point from the free strike. It's first shot does 7 points of damage to Stryker, but its second one misses.
Turn 5 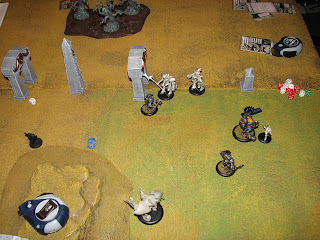 Cygnar
Stryker drops all upkeeps and puts 3 focus on the Ironclad. The Lancer walks up close to Kaelyssa. Stryker channels an Earthquake through the Lancer, knocking her down. The Ironclad then charges and can't get base to base, but is just within the 1/2 inch melee range. It is enough, and Kaelyssa is squashed flat. 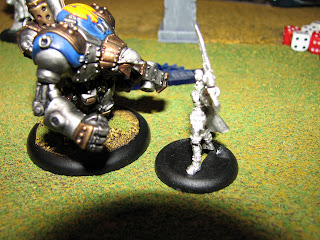 Defenstrator
That was an interesting game with alot of back and forth. I really liked how the Charger handled himself. Even while getting beaten up he kept dishing out the damage and making it impossible to ignore him. I probably could have been more aggresive with Stryker as well. If he had moved up a bit further he could have been alot more of a pain with the Disruption effect on his pistol.
Myantek
I thought I was doing pretty well until I forgot to move Kaelyssa back a bit. So far, Retribution plays a lot differently than my Circle. I'm not used to doing quite so much shooting. Still, I have to practice the Focus mechanic a little more, I'm not used to planning out what all the models have to do in a turn, just what I want my warlock to do.