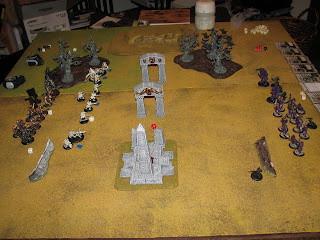 On the far left is a hill, with a forest template on each side. In the centre there are various ruins that give cover with the remains of a temple on the for right.
The GMCAs were set up on the left flank, with the Grenedier, Centurion, Kraye and the Sentinel in the middle. The Swordknights are to their right but still central, with the Trenchers Advance Deployed in front of them. The Chain Guns are Advance Deployed on the left and right flank respectively.
On the other side the Mage Hunters are on the left opposite the GMCAs. The Ghost Sniper and Arcanist lurk behind the forest with the Gorgon beside them. Garreth is central with the Chimera and Sentinels centre right, along with Narn and the Magister.
Turn 1
Kraye assigns 1 focus to the Centurion. The Trenchers advance and Dig In, with the Sword Knights behind them. The Chain Guns advance and Dig In as well. The Grenedier advances to the far left Chain Gun and spams AOEs at the Mage Hunters, killing one with the blast. It then uses its free move from Iron Horse to back away. Kraye casts Full Tilt on the Centurion and advances. The Centurion runs forward while the Sentinel runs to the right flank.
Garreth gives a focus to both the Gorgon and Chimera. He casts Mirage on the Sentinels and advances. The Sentinels run but stay out of the Trenchers 10" range. The Ghost Sniper moves up and does 3 points to the Centurions 5 coloum. The Mage Hunters then advance and start lighting things up. One of the left Chain Guns crew are killed and they cripple the right arm (with Piston Spear) on the Centurion. Nayl runs to the ruins while the Magister advances behind the Sentinels.
Turn 2 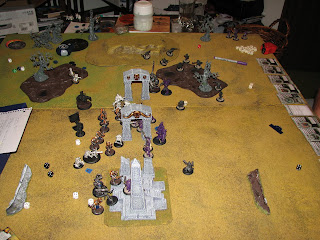 Cygnar
Kraye upkeeps Full Tilt. The two GMCAs Snipe and kill one Mage Hunter. The Sentinel moves up and shoots Narn point blank. The Centurion advances and uses the Magno Shield to deny charges. The Grenedier advances to the left Chain Gun, spams some AOEs at the Mage Hunters but hits nothing, and moves away again. The Trenchers throw smoke because I don't dare shoot the Sentinels at this range due to their Vengence. The Sword Knights manuever behind, while the two Chain Guns put down Covering Fire.
Retribution
Garreth upkeeps Mirage, gives the Gorgon 2 focus and the Chimera 1. The Mage Hunters kill the left Chain Gun but can't roll a 9 to kill either of the GMCAs. The Ghost Sniper does 3 points to the Centurions 1 coloum. The Arcanist gives the Gorgon +2 to melee damage rolls. The Gorgon then advances and destroys the Centurions shield with a combo-strike. Garreth advances and shoots a Trencher. The Sentinels charge/run, killl a Trencher, and tear off the Sentinels shield. The Magister shoots at the right Chain Gun but misses.
Turn 3 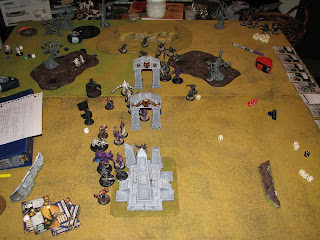 Cygnar
Kraye upkeeps nothing and assigns no focus. The Trenchers advance and kill a Sentinel; the Sword Knights charge and kill 3 more, but can't get past to get at the ones behind. The GMCAs continue to aim and Snipe off two more Mage Hunters. The Chain Gun returns fire on the Magister and does 2 points of damage. Kraye advances, feats, casts Guided Fire and Mage Sight. He shoots twice at Garreth, but only hits once. The Sentinel does nothing, bouncing off the effective ARM 17 of the Sentinels. The Centurion does nothing, his crippled weapon sucking out. The Grenedier advances to the Trenchers on the left and shoots three times at Garreth. It hits twice, reducing Garreth to 1 wound.
Retribution
Garreth upkeeps nothing and assigns no focus. Vengence activates on the Sentinels and they kill 2 Trenchers and 4 Sword Knights in retaliation. The Arcanist gives the Gorgon +2 melee damage again and it combo-strikes the Centurion for 3 more points of damage. The Ghost Sniper advances and does 3 auto damage to Kraye. The Mage Hunters miss the GMCAs again, but hit Kraye for 3 more wounds. The Chimera advances and whacks the Sentinel for a bit of damage, while the Sentinels and Souless reduce it to one damage box. The rest of the Sentinels kill another Trencher and 2 more Sword Knights. Then Garreth aims at Kraye and knocks him out of the saddle with two boosted shots.
Afterward
I learned alot this game, about a variety of things.

The Chain Guns didn't accomplish anything this game. In the future I think I would put them together to maximise Covering Fire. As it was the Mage Hunters picked off one and the Covering Fire on the other wasn't large enough to prevent the Sentinels from moving in.
The GMCAs killed 3 Mage Hunters, not a good investment for 4 points. The Black 13th would have been far better in this role due to the large amount of firepower they have. Plus due to Prowl they would have had Stealth while in the woods, making them immune to the Mage Hunters return fire.
The Sentinel had a moment of glory when it killed Narn, but then was just beaten up by the Retribution Sentinels. With its low POW it couldn't do anything in melee and basicly just killed half his points. Also, Privateer should not give two different units the same name as it becomes confusing when writing battle reports.
The Centurion didn't accomplish much at all. Once its main weapon was crippled it wasn't able to perform effectively and was tied up by a jack worth half its points. Using the Magno Shield was aggrivating because I was always forced to give up the initiative if I wanted to use it.
The Trenchers I misused. I should have had 3 of them smoke and have everything else taking cover behind the 3 sacrifices.
The Sword Knights also didn't work well. I didn't need the meat shields since I had smoke, and the UA did nothing since I didn't have a jack for it.
The Grenedier was my best performing jack. Iron Horse let it get around its short range while staying safe, and it put out a decent amount of firepower, nearly getting the caster kill. It can make Guided Fire worth casting.
Kraye had a hard time. Guided Fire plus Mage Sight is great, but it also costs five of his six focus. His main trick is Full Tilt plus Feat on a heavy, and if I only have one heavy I better have a way to fix it in the army so I keep that option open.
Posted by Defenstrator at 12:22