We pulled out the Steamtroller 4 scenarios and rolled to choose which one we going to play. Neither of us were particularily excited about Ridge Raiders but decided to give it a shot. 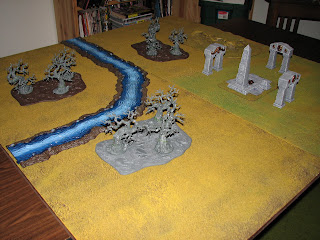 Defenstrator had picked up a new river template and was looking for a chance to use it so the lower left hand corner of the board was a river bend. On either side of the river was a stand of trees with a third stand in the middle. The right hand side of the board was a small hill and a small ruin. I won the dice off for deployment and chose to take the first turn. 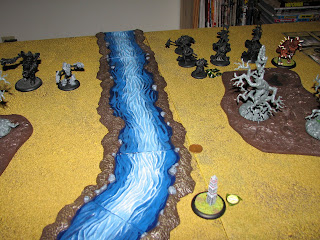 the Ravagers were placed as close to the centre forest as I could manage with Baldur just a little bit in front of the Tharn. The Woldwarden was placed near the trees by the river.

On the Legion side, Defenstrator set up the 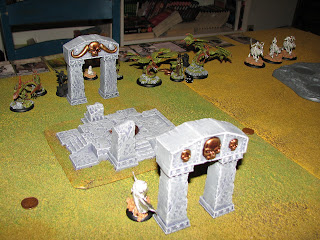 Teraph in the ruins with a Forsaken on either side with the Shepherd on the left of the group. The Feralgeist, Seraph , Lylyth and Seraph 2 were near the centre of the deployment zone with the Swamp Gobbers slightly behind them and the Raptors on the far side of the river by the trees.

When the advance deploy phase came I placed the Sentry Stone mid table by the bend in the river and the Woldwatcher by the Woldwarden. Defenstrator placed the Strider Deathstalker at the top point of the ruins.

The Sentry Stone produced a Mannikin behind it near the river and Baldur cast Earth's Blessing on the Warpwolf before walking into the trees. The Warpwolf gave himself +2 ARM and promptly ignored the fact that he could now walk through the trees by walking up the clear ground between the trees and the hill.

On the other side of the board the Woldwarden moved up beside the trees and was followed by the Woldwatcher who put Vigilance on the big guy to save him from a Raptor charge.

The Ravagers ran into the trees and took up position around Baldur while the Mannikin moved up the river to a place that it could have been created but I wasn't thinking about where I actually wanted it to be.

The Raptors walked through the forest to the river and shot the Mannikin to kill it. As fas 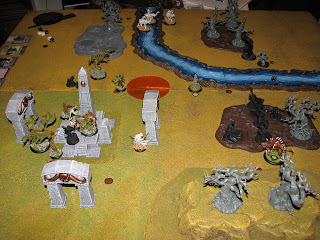 t cavalry they used their free move to then push up the board, with only one of them making it to the other side of the river.

The Deathstalker aimed and shot at the Ravagers doing 2 points to one of them while Seraph 1 cast Slipstream and moved sideways to place the Teraph forward. The Teraph then moved into the ruins and shot shot at the Sentry Stone. (What's the point of Invisibilty when your main opponent has so many things that have Eyeless Sight?). The Teraph was out of range and the shot deviated away to do nothing. The beast then riled for 3 Fury. Forsaken 1 moved up to claim this Fury.

Seraph 2 cast Slipstream and moved forward, pulling Lylyth with it. Lylyth then moved forward herself and shot at the Ravagers. With boosting to hit and damage she managed to kill 2 of them. Moving up behind Seraph 2 the Swamp Gobbers laid a smoke template in front of Lylyth.

The Shepherd, Forsaken 2 and Feralgeist all moved into the ruins. 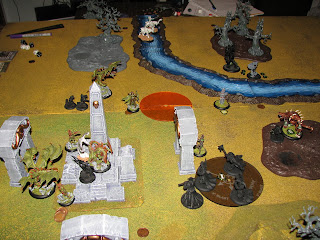 Baldur leached to full Fury and upkept Earth's Blessing and the Sentry Stone created a Mannikin towards the ruins.

The Woldwarden moved forward and cast Earth Spikes at the Raptors managing to kill one of them. The Woldwatcher followed it and, once again, cast Vigilance on the big guy. The Mannikin moved over to hug the ruin.

Baldur moved forward to the edge of the trees and cast Rapid Growth between the ruin and the hill. I couldn't get the template exactly where I wanted to because there wasn't quite enough room for the whole forest but it was close enough. He then burnt a Fury and then feated.

The Ravagers charged the Deathstalker and killed her and the Warpwolg took advance of Earth's Blessing and moved in behind Baldur. 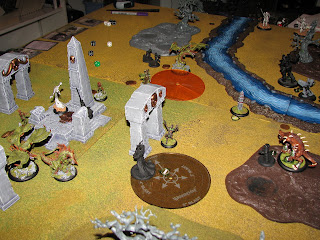 e decided to cut herself up to full. Following Baldur's lead Lylyth also feated and shot at the Woldwatcher for 8 points.

Seraph 2 moved forward and shot at the Woldwarden with 1 extra shot doing a total of 11 points. The Shepherd simply moved in front of the Teraph.

Seraph 1 shot the Ravagers with 4 extra shots and killed 2 of them plus the Beastmaster. The Teraph moved in front of Seraph 1. It attacked, and killed, another Ravager. Being Fearless has its advantages and so the remaining Ravager did not turn tail and flee.

The Swamp Gobbers moved behind Seraph 2 and laid a gas cloud in front of the beast and Lylyth. Forsaken 1 ran to the ruins while Forsaken 2 moved around the ruins to get the 3 Fury off Seraph 1. The Raptors Double Shot the Woldwatcher for 3 points and spread out over the ridge.

Baldur leached to full Fury and dropped Earth's Blessing and Rapid Growth. The Sentry Stone produced a new Mannikin as close to Lylyth as it could manage.

The last Ravager charged the Teraph and missed. Twice. Defenstrator had managed to kill all the Ravagers except the one 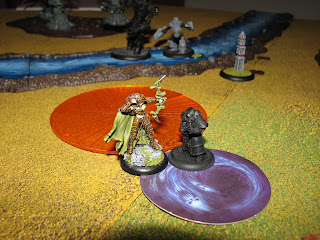 carrying the Heart Token and the boy can't produce. Sigh.

The Sentry Stone stole Fury from Lylyth and from Seraph 2. The Mannikin by the ruins stepped forward and destroyed itself to spray Lylyth. It used Fury from the Sentry Stone to boost but still managed to miss. Time to throw something else at Lylyth to try and soften her up a little more.

The Woldwarden cast Earth Spikes at her and not only hit, but managed a critical hit knocking the Legion warlock down. She transferred the 7 points of damage to Seraph 2. The Woldwatcher moved forward into the river and took it's chance to actually hit something. The 14 points it inflicted were also transferred to Seraph 2 and the beast was killed.

The newly created Mannikin walked forward to Lylyth and turned into a forest. Baldur then used that forest to Forest Walk to engage Lylyth and begin pounding on her with his big, stone sword. The first 12 points he did were transferred to the Teraph but that was the last of Lylyth's Fury and the next attack killed her.

When I feated at the end of my second turn I was a little concerned that it was too soon and I might have benefited from waiting a bit and trying for a scenario win. I didn't think that I could win on the scenario because Defenstrator's army was just that much bigger than mine and I didn't think I'd be able to get rid of enough models before he got rid of enough of mine. So when he moved to a position that I liked I took the chance of feating. Something I've noticed with Baldur is that people get so caught up in where they can't move they sort of overlook where they can move. Worst case scenario he would've remembered to Bushwhack Lylyth and she'd be farther away. I would've had to switch targets but I would have cleared out the beasts a bit. I have to admit that the critical knockdown on the Earth Spikes was a nice piece of luck.

I've tweeked my Baldur army and I'm a lot happier with it now. The Warpwolf will probably be replaced by a Satyr (whenever it manages to get built) but the Earth's Blessing spell that Baldur has lets everything move through difficult terrain which is handy. I had no worries for Fury (even though the Warpwolf didn't do anything) it was nice to have it hanging around with my warlock.

The moral of this story is to pay attention and don't rush. My first elementry mistake was when the Forsaken claimed the fury on the Teraph. I had already earmarked that in my head for Lylyth, but when I came to the Forsaken's actiavation I grabbed the fury, because that's what he always does.

My much bigger mistake was failing to Bushwhack with Lylyth. I was so caught up with hosing the Woldwarden down with the Seraph that I literaly forgot to make Lylyth's second attack and to back up. After the Seraph was done, I realised how badly I just screwed myself. Sure enough, Myantek did not let this mistake go to waste. She made aboslutely sure that Lylyth was going to be dead. So much so that there wasn't much left for Baldur to do once he finally teleported into the forest beside her.

I don't really have a set list, I tend to just stuff stuff together. If I had a do over I would certainly drop a Forsaken. With just three lights and no lessers I had no problem getting by with just one, and with my 4 spare points I could have taken another Deathstalker instead.
Posted by Myantek at 16:15