278 points Legion vs 275 points Circle Battlebox fight.
So, it's been a while since the blog was updated. Games were played, painting was done, blog was neglected. So it's back to the grind and finishing things. One of the things done was that I finaly finished Lylyth. She's been in an almost done state for over a year, and now that she is finaly done we thought it might be nice to have a quick fully painted core game.
Legion:
Lylyth, Herald of Everblight
Carnivean 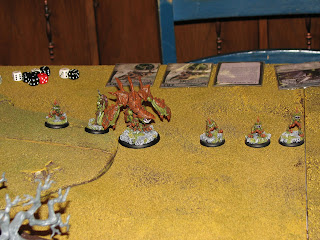 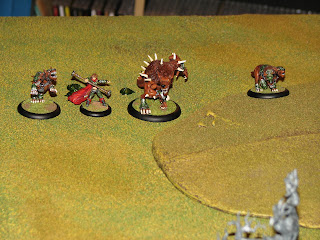 Set Up
On the right side of the board were two hills, with a forest between them. The centre was clear, while the left side had a forest at each end with the Cryx Necro-mine thing from Gale Force 9 between them. 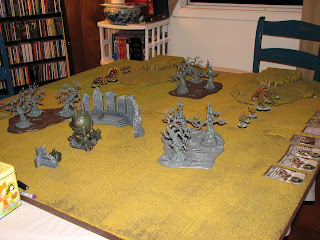 I (Defenstrator) won the toss to go first. I set up on the centre right of the board and, going from right to left, set up Shredder 1, Shredder 2, Shredder 3, Carnivean, with Lylyth beside but slightly behind the Carniven and Shredder 4 beside her. Myantek set up opposite with Argus 1, Kaya, Warpwolf, Argus 2.
Scenario
We played a straight assassination battle.
Turn 1 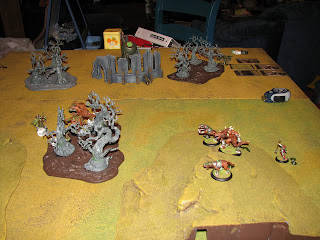 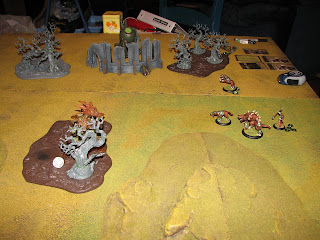 Legion
Funnily enough for an army made out of eyeless sight models that Cloak of Mists now put me in a bad position. I had hoped to snipe at range to force them towards me, but Lylyth has no eyeless sight so my closest target was the Warpwolf. If I moved close enough to shoot it then Argus 1 would surely just run up for a Kaya assassination run. So manuevering was going to be a bit tricky.

My turn started and I realised that I had moved Lylyth so that her control zone no longer included Shredder 1. Whoops. So Lylyth leached only 4 and Shredder 1 checked for frenzy, which he fortunately passed.
Shredder 4 moved forward, close to the edge of the trees. Shredder 2 went Rabid, walked up beside Shredder 4, and cast Tenacity on itself. The Carnivean moved up beside them. Shredder 3 moved partially into the trees and cast Teancity on the Carinvean, while Shredder 1 moved over to get near Lylyth. Lylyth then walked up behind her wall of beasts and used her Arcing Fire to shoot over them into the Warpwolf, who took a measly 2 points of damage. That was followed by casting Bad Blood on the Warpwolf.
Circle
Kaya leeched all the fury and took 2 points of damage from Bad Blood, and upkept both Rager and Cloak of Mists. Myantek decided that attacking into the woods was a losing propostion and so decided to manuever some more.

Argus 1 ran to the table centre followed by Argus 2. The Warpwolf took +2 ARM, walked up by Argus 2 and Regenerated the 2 points of damage it had taken. Kaya moved behind the Warpwolf. 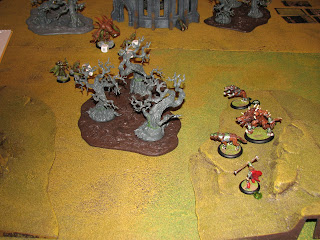 Legion
Lylyth leeched all the fury. Seeing Kaya circling around she cast Tenacity on everyone and moved back. Shredder 1 walked back towards the table centre. Shredders 2, 3, and 4 went Rabid and did the same. The Carnivean ran to join them.
Circle
Kaya leeched and continued to upkeep Rager and Cloak of Mists. Argus 1 and 2, and the Warpwolf, all ran back to the hill. The Warpwolf riled for two more fury. Kaya then cast Spirit Door to move over beside Argus 2.
Turn 4 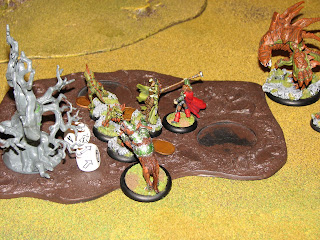 Legion
Lylyth leeched all. Shredder 4 went Rabid and put Tenacity on himself, then walked into the trees. Shredder 3 did the same. Lylyth moved up behind this little fleshwall and used Arcing Fire to shoot the Warpwolf, this time destroying its Spirit with a boosted dmaage roll. Lylyth then cast Bad Blood again and camped on 1 fury point. Shredder 2 went Rabid and ran up beside Lylyth, The Carnivean and Shredder 1 walked over to end up near them.
Circle
Kaya leeched everything and took 3 more points of damage from Bad Blood, putting the total at 5 wounds. Kaya upkept nothing. Argus 1 walked up to Shredder 3, but bounced off the surprisingly tough Shredder. Kaya then made her move and cast Spirit Door, ending up within reach of Lylyth. Kaya attacked and Lylyth transfered 11 points of damage to Shredder 1. Kaya then feated and took six more fury. She continued to attack Lylyth, and missed, then hit for 8 points of damage, and then missed again. At the end of this turn Myantek conceeded, since a wounded Kaya had no fury and was standing next to Lylyth, 3 Shredders, and a Carnivean, with Lylyth still having her feat to use.
Afterword:
Defenstrator
A tight little game. One thing I found interesting was that I didn't feel over pressured by the amount of fury I had to deal with. When I play larger forces fury is always strictly accounted for. As soon as I get more than 3 fury over what the warlock can take in goes a Forsaken. In this game I had 12 fury on a 5 fury warlock, but the only time I got into trouble was when I wandered a Shredder out of my own control area. Of course I never had a crazy attacking turn where I would have been stuck with the aftermath either. Still, it was fun to go back to basics.

Probably the toughest part of this game was that neither of us was willing to engage except on our own terms. We had tiny armies that circled each other for awhile before the end suddenly came. I couldn't afford to send the Carnivean in against anything but the Warpwolf. Pouncing on an Argus would just get it killed by a counter attacking Warpwolf. I also couldn't afford to get too close to Myantek's army unless I wanted beasts to charge out, hurt me, and be Spirit Doored back to safety.

At the same time Myantek didn't dare get too close either. An isolated Argus could have easily been torn apart by Shredders, and Lylyth herself could just keep plinking and moving away with her bow. I ended up making a wall for Lylyth to hide behind and shoot at what I could, hoping to bait Myantek too close. As it was I screwed up. Kaya was able to make the assassination run and if Myantek had rolled the Crit Knockdown Kaya would have beaten Lylyth's head in. As it was I got lucky and Kaya wasn't able to finish the job.
Myantek
All I needed was doubles. The thing about Kaya is that she's all about moving the battle to where she wants it to be. Legion sort of nullifies that strategy by being able to ignore half the things Kaya can use to her advantage. It becomes a game of small maneuvers until one person makes a mistake or takes the chance. As it was I probably shouldn't have taken the chance.

I wanted the Argus close enough to let Kaya jump on Lylyth but I didn't want it doing any damage to the Shredder to let Lylyth transfer damage and then get more Fury to do more transfers. He was just going to be a Kaya delivery device. I was hoping to get to position where either Kaya or the Warpwolf could charge but the wall of Shredders was preventing that. Even so, I thought I had a fairly good shot at pulling down Lylyth because she's really not that tough. Unfortunately the dice were not quite with me. Kaya was left exposed, vulnerable and (even though Defenstrator wanted to roll out the end "just to be sure") dead.
Playing with two Arguses (Argui? Argi? whatever) was interesting as there's just better things in the Circle tool box to play with. It was nice to see fully painted armies on the table too. Even if it was just the battle box.
Posted by Myantek at 16:34

I'm just glad you're back, I missed your updates and feared the worst. Oh noes!